Share All sharing options for: New Chicago Fire player Daniel Paladini through the eyes of David Fellerath of Independent Weekly

Now that we have the opinion of Daniel Paladini from a leading supporter of the RailHawks, we turn to someone who has a similar background to the writers on this site: David Fellerath.  Fellerath is the culture editor for Independent Weekly, an alternative paper in Raleigh, Durham and Chapel Hill, N.C. in addition to covering the RailHawks on their sports blog, Triangle Offense.  Just today the blog ran a great investigative piece on the RailHawks ownership exchanging hands.  I'm impressed by their answers here and their overall writing and grateful to have David answer the following questions on the Chicago Fire's new acquisition.

1. What was your first memory of Daniel Paladini?

My first memory is when Jarrett Campbell, the leader of the RailHawks' supporters group, sent me an e-mail in December '08 or January '09 that just contained a link to Paladini's Wikipedia page. Apparently he'd spotted him at the open tryout to which Paladini had been invited. A couple of weeks after that e-mail, the RailHawks announced that they'd signed him. "Easy to pick out," I believe Jarrett said later of seeing him at the tryouts. Paladini had recently parted ways with Chivas USA, and apparently the RailHawks' new coach, Martin Rennie, had invited him to the tryout at the urging of Josh Gardner, who was one of Rennie's earliest signings. (Gardner, whose career includes three seasons with the L.A. Galaxy, is married to Paladini's sister.)

My first sighting of Paladini was during a 2009 preseason training session-ironically, my only memory of him that day is seeing him shoot a 25-yard spot kick high over the goal. I say "ironically" because he would prove to be deadly from spot kicks in his ensuing two years with the RailHawks.

I first met him in June of 2009 when I wrote a story for our print edition that a lot of people seemed to like. My goal was to try to illuminate for casual soccer watchers the subtleties of what midfielders do. So many people - myself included - start watching soccer by simply following the ball, but wish they understood the bigger picture a little better.  Paladini was gracious and helpful as I worked on the story.

More with David Fellerath on Daniel Paladini after the break

2. What formation do you think that Daniel Paladini would shine in the best? The 2011 Chicago Fire will most likely play a 4-1-4-1 or a 4-1-3-2 formation with Logan Pause being the defensive midfielder in either formation. Where would Daniel Paladini best fit given that setup?

Paladini is an attacking central midfielder. He spoke to us early in the 2010 season with great enthusiasm for the 4-4-2 diamond formation that the RailHawks were practicing. We didn't see much of it until late in the season, and it was very effective - at least until the playoffs. Based on what we saw in two years, I would expect him to be in the middle of either of the formations you mention. He has an intuitive grasp of tactics-he spoke to me once about constantly taking mental snapshots of the field. He's always looking for the ball, and always looking to redistribute it with aggressive intent.

If Paladini plays in front of Pause, that will give extra interest to soccer fans down here: Pause is a native of the area and played at UNC-Chapel Hill.

3. In an article you wrote last May, you mentioned that Daniel Paladini had been struggling to hold a regular place in the lineup. Could you give the context of why that was? Was he injured? Was he involved in a position battle? How did his playing time pan out in the rest of the year?

I can't speak to what was in Rennie's mind at that time. I can only say that up until then, Paladini's performance had been somewhat disappointing considering that he had been the team MVP and an all-league choice the previous season. At that point in the season, in late May, he seemed to be losing minutes to Floyd Franks, a new signing. He wasn't injured, but it should be noted that Rennie likes to play a deep team-sometimes to the frustration of people like Paladini. As the season wore on, Paladini reasserted his place in the lineup and was again selected to the all-league team. I think the game I wrote about in the post you cite was a turning point in his season.

There are several high points. In two seasons in Cary, he scored no fewer than three goals at the death. Following the last-gasp 35-yard winner against Puerto Rico that I wrote about in the post you cited, he poached an equalizer in the last few seconds of stoppage time in Portland. I don't know if you're familiar with the Timbers' stadium tradition, but after every Timbers goal, their lumberjack mascot fires up a giant chainsaw and cuts a slice of timber. Well, when Paladini equalized in Portland, he ran up to the lumberjack and motioned for him to cut a piece of wood. Very cheeky, and we loved him for it.

Paladini is a showman with keen populist instincts. After scoring the breakthrough goal against NSC Minnesota in the second leg of the first playoff round last season, he vaulted the fence to celebrate among the fans, thus yielding this memorable photo: 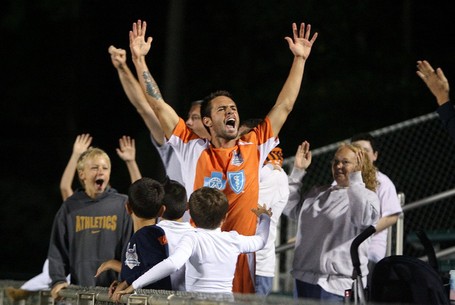 The low point: Paladini blew a first-half penalty kick in the RailHawks' 2009 playoff elimination by the Vancouver Whitecaps. Had he made the kick, the RailHawks would have forced extra time in the second leg of the quarterfinal. He was devastated by his failure to convert the kick, clearly shouldering the burden of being the team's go-to player.

5. How do you think Daniel Paladini will into the community of Chicago and the club of the Fire?

Well, he's great with kids and young women no matter where he goes, and seems to be game for the public relations aspect of his job, judging from his willingness to linger after games cheerfully signing autographs. Although he's a Californian who, aside from his two years in North Carolina, has spent his entire life on the West Coast, he lives to play soccer and I expect him to adapt easily to the Midwest.

We journalists particularly appreciated him. His tactical intelligence and, especially, his candor made him a favorite among the small cadre of reporters covering the RailHawks (e.g. "So Daniel, I wonder if you might have embellished that foul that drew the red card on your opponent." "Sure, I thought I needed to sell it a little bit, so I took a couple extra tumbles." That's a paraphrase, not a direct quote, by the way.)

"We told ourselves... no excuses, we had to play on the same bad field [in Bayamon, P.R.] that they had to play on. But they're more of a scrappy team. We play soccer, we play on the ground, they like to kick it long, you know, they have fast guys up top and that's all they count on and we knew that. We want to put on a show for our fans, that's what our job is, to entertain fans. And when we're knocking the ball on the ground, it looks much better than just kicking the ball long like they do. It just worked out for them over there and that's why I mean, all the teams in the United States hate playing over in that stadium.... what they do, they practice playing on that field every day... it's a miserable field."

Thank you David for the great background information.  Paladini's thoughts on 'attractive' soccer make him an interesting player for coach Carlos de los Cobos' system in light of CDLC's infamous promise to bring 'attractive' soccer to Chicago.  The more and more feedback I receive on the former RailHawks midfielder, the more and more I see him fitting into the system.  In the perfect world, the Chicago Fire just found a new starting CAM.  In the realistic world, Paladini is a USSFD2 player looking to break into the MLS.  He will likely be relegated to substitution duties or even playing in the reserve league.  That's not a bad thing though if you look at his track record.  He can be successful coming off the bench and being benched doesn't seem to diminish his performance.  Even if he plays mainly in the reserve league, Paladini could be a valuable leader to the likely younger players that surround him.