Chicago Flag Alternate Jersey: Seems to make a lot of sense from where I'm standing

Share All sharing options for: Chicago Flag Alternate Jersey: Seems to make a lot of sense from where I'm standing

Although the recent rumors (ahem and gesundheit) display the fact the Fire certainly have more pressing needs personnel-wise this offseason, I am confident those will be addressed in due time. So I am turning my attention to why the Fire should introduce a good, usable 3rd jersey.

This is something that has to be done right. None of this copying your regular kits and just throwing out an alternate color design. An alternate kit should be different, unique, and certainly distinguishable. The USMNT took the opposite approach, introducing a clone of the two kits they already had and failing to bring out something that could have really been special. Alas, the Fire don't have to worry about this. They have an idea they could use that instantly distinguishes them from any other team in the world. If done right, even people that don't watch soccer could wear it proudly around this city. Yes, it's time to give the fans what they want. It's time for a Chicago flag alternate kit.

Although the Fire have actually had an alternate like this before, it was only briefly and I believe it could have been so much more had the organization realized just what they had on their hands. It's time to make this idea a reality again and make sure it's here to stay. With a unique, fresh design this idea could really take off. There's too many benefits to ignore it any longer.

One of the first things to notice about the picture at the top of this article is that the Fire have never really had a true 3rd jersey. There are alternate designs, but most were 'one-offs' that were only worn once, hence you can see the date they were worn if you look really closely. In team history, the flag jersey is the only one listed as a true alternate. Unless my memory completely fails me, they rarely wore it despite the denomination. There are too many positive reasons to bring it back for it not to happen. Of course, a redesign would be necessary, but nothing too drastic. I love the light blue color with the 4 stars across the front honoring the Chicago flag. I think if the Fire front office teamed up with the fans, they could really produce a winner that all other sports teams would envy. Adding to aesthic value and getting fans involved is just the beginning. 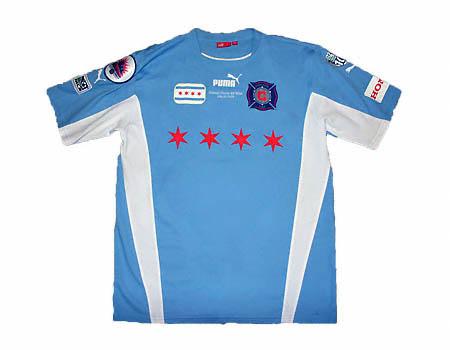 This is one great look

One of the main reasons teams bring out third jerseys or alternates is to generate additional revenue. Jersey fiends, kit nerds, sport collectible connoisseurs, whatever you want to call them, that's just one group of people who buy these kind of things. You also get purchases from people who don't like a team's main colors but will go crazy for something different. I don't know about you, but I don't think I have ever talked to a Chicago Fire fan that didn't like the flag jersey or didn't like the idea of having it again. Simply put, it WILL SELL. I might even buy two. Honestly, I think it would sell better than the away jersey. Although I may be in the minority here, I don't like the plain white away jersey from last year. Why wasn't FIRE emblazoned across the away jersey like it was on the very sexy home jersey?Every time I saw the away jersey, it reminded me of playing in plain white Fruit of the Loom t-shirts.

People in Chicago may not go for a plain white t-shirt look but having something they can instantly identify with would be a game changer. Like any inhabitant, I would imagine that lots of Chicago residents, soccer fans or not, would be proud to wear a jazzy jersey with their hometown symbol along the front. That's why we buy sports jerseys, right? To represent our team wherever we go? Why can't it be the same with a jersey carrying the flag of your beloved hometown? It would be huge for the Fire to have people walking around the city wearing the flag jersey. One, because it's a great design and looks cool. It also generates more revenue for the Fire, as well as much more visibility. Even if you aren't a soccer fan, you will learn about the Fire when you walk up to someone asnd ask where they got the jersey. A good jersey doesn't have to just be about civic pride though.

Think of all the storied soccer clubs in the world. There are usually a few things that make them known throughout the world. Iconic stadium? Check. Legendary names? Check. Lots of success? Check. But, most of all, they are instantly recognizable by their jerseys. Think about Manchester United. Although I may despise them, I can pick out a Manchester United jersey anywhere in the world. What about my own Newcastle United? The black and white stripes give it away. Inter Milan? AC Milan? Barcelona? Even if you don't follow international soccer that much, you can probably pick these out anywhere in a crowd. A truly unique design is recognizable anywhere once it catches on. As the MLS grows and more foreign fans become interested, they will pick a team for many reasons. It could be they visited that city or have relatives there. That team might feature their favorite player. But, most often, people picking a new team do so because of the jersey. I know tons of people that originally picked a team because of the colors, design, etc. Let's face it, a unique, well designed jersey works wonders. It stands out, it looks good, and people want to call it their own. The fact that the Fire would have a truly unique look by using the Chicago flag can supply all of these things and more. It's the only design like it in the world. Once somebody sees it and learns what city it represents, they will forever remember it. So when somebody wants to pick their favorite team, be it in the city of Chicago, in another state, or even another county, of course they want to wear proudly "that really cool Chicago flag jersey". And the fans that have already been with the Fire for any capacity of time get something they really want.

Wrapping civic pride and the world's greatest clubs into one final issue, the flag jersey could be reserved for special competitions. Seattle does this with their third kits but I believe they are going about it the wrong way. Blue and green are colors that represent their region's blue waters and 'deep green grass' but according to team officials they wear their third jersey "in Champions League, U.S. Open Cup, and friendly matches in order to differentiate between these competitions and MLS league matches". It's a great concept but when they play for domestic and international pride, they sport random colors that seemingly exist only to test the limits of the color spectrum of the latest TVs. I mean, why else would you have this or this?

Think of the concept of Chicago wearing the flag jersey but only for Champions League, U.S. Open Cup, and other exhibitions against international and domestic teams alike? Manchester United playing in Soldier Field? You know you've come to Chicago, you can't miss the flag across our chest. U.S. Open Cup game anywhere, anytime? The road goes through these two stripes and these four stars first America. What about when Chicago plays through CONCACAF Champions League and then wins the FIFA Club World Cup? It's not just the Fire that would raise that trophy, it would be clear that Chicago is the best soccer city in the world that year.

Things like this could really help Fire expand in Chicago and outside of the region. It's taking ideas like this and using them not only to make money, but to expand the visibility of the team and bring in an ever expanding fanbase. Chicago is a tough market with 5 professional teams in front of us. It's greatly important to find unique ways like this to get the Fire identity out there. Let's make it happen.