Share All sharing options for: Toyota Park Concessions: More Than Meets the Eye

A couple of weeks ago I went behind Section 122 to grab a beer for myself and a snack for my wife.  My wife has a major gluten intolerance so her options are kind of limited, especially if she wants to eat healthy.  I had to go unhealthy and get her some popcorn.  I'm not sure the peanuts or nachos would have been any more nutritious.  The popcorn was okay but nothing special.  Later that week I got an E-mail from the Toyota Park concessions asking me if I would like to take a tour of their offerings at stadium.  In our mission to highlight every nook and cranny of the Chicago Fire operations, I said yes... but with a bit of skepticism.  Were they going to highlight the same popcorn and peanuts?  Tell me there is a new relish offering?  To paraphrase an old saying, where was the beef going to be?

After the tour, I was embarrassed I hadn't looked around more.  I'm here to tell you with the faith of a convert: Toyota Park has some of the best concessions in town.

My tour started by meeting Head Chef Domenico (we are going to pretend he just has one name like Pele) and Director of Operations Tim Champagne on the concourse outside of Section 128.  Both work for Levy Restaurants at Toyota Park.  Levy Restaurants is a company that was founded by Mark and Larry Levy right here in Chicago in 1978.  The Levys have gone from investing in a tiny store in Chicago's Water Tower Place to running the food for stadiums, convention centers and other venues around the country.  I was happy to learn that Toyota Park and the Chicago Fire were keeping it local when they hired their concessions company.

The first stop on on the tour was the Stadium Club.  This part of the stadium is only available to Club Seat Holders in Sections 127, 128 & 129 so I was expecting to be spoiled right off the bat.  The taco buffet pictured below is just one of three stations to choose from for an all inclusive dinner price of $23.75.  The other stations offered delicious items like shrimp, lamb, jalapeno corn muffins, baked potato, mushroom and spinach quesadilla, skirt steak, short ribs, and more.  $23.75 may seem like a steep price but for this upscale buffet, it is worth it.  The Stadium Club remains an exclusive perk of Club Seat Holders but there is a debate about opening it up. 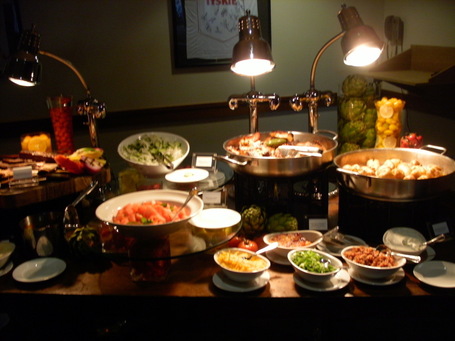 After the Stadium Club, we went to Bobak's Sausages and Street Fusion both located behind Section 124.  Bobak's and Street Fusion are two of 7 food portables that are stand alone and not connected to the stadium structure itself.  I was impressed with the steak and chicken skewers as well as the gyro meat (100% gluten free so you know my wife and I will be back).  Those looking for something different than typical ballpark food will enjoy the elotes available at Street Fusion.  Some readers might already have their mouths watering but others might be confused as I was at first.  Elotes are Mexican corn on the cob typically served on the street like you would expect a hot dog from a hot dog cart to be served.  The main toppings are cheese, butter, mayonnaise, and chili powder.  Apparently I've been missing out and tip of the hat to Levy for bringing a new Chicago tradition into Toyota Park.  There's also a Rip n' Dip, fruit cup and a couple of other 'non-traditional' items to be found here.  The wall behind Section 124 is a must if you want something different and a variety of gluten free choices. 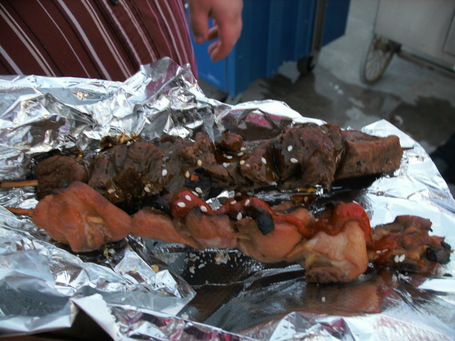 The chicken and steak skewers available behind Section 124

The next item on the agenda was described as the 2011 'Wow' item: Fire Hat Nachos.  Wow is right when I found out the price is $13.50 but hear them out.  The nachos are smothered with cheese, sour cream, peppers and your choice of meat.  They layer everything twice so it's really like getting two nachos orders for the price of, well two nachos orders.  If you have 2 people or more, this is the piece for you.  It's very tasty and the fire hat they come in is very deep and much more sturdy than a typical nacho tray.  Bridgeview Breakaways behind Section 125 and Red Hot Hacienda behind Section 120 sell the nachos in the big red hat.  Unlike the standard nachos, you won't be left with those last few chips with nothing to dip them in. 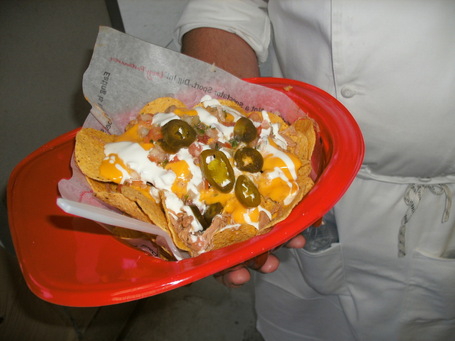 Fire Hat Nachos: Don't order if you are just one

Moving right along we hit up Harlem Avenue Dawgs behind Section 116.  The concept here is loaded dogs with different flavors to appeal to anyone.  You have your Deli Dog, the Nacho-Yo Dog, the Frito Pie Dog, Taco Dog, Game Day Dog, and the Heater Dog.  Depending on the day or the week, they will even have a special.  Try and wrap your head around a Kimchi Dog.  I'm not a fan of Kimchi but the flavors were done well.  My wife was designated heat taster and the Heater got her seal of approval on the spice catching up with you.  Don't forget she didn't have the bun because she is gluten free.  There's a chance the bread absorbs more of the heat.  These dogs come 'fully loaded' as advertised and they are worth the extra $2 or so they will set you back over a regular hot dog.  Find your favorite flavor and dig in. 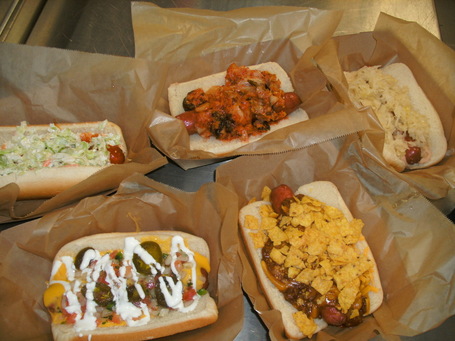 So many different flavors on the hot dogs, you'll have trouble making up your mind.

Therein lies the rub too - I didn't even get a chance to mention some of the other quality concession stands around the park like Connie's.  In addition to Guinness, there is already a wide variety of beers offered too.  I discovered that instead of purchasing a whole thing of popcorn behind Section 122, I should have picked up a smaller bag of popcorn available at the stand behind Section 126.  Not only would the portion size have been better, but my wife and I would have saved about 450 calories in the process.  We'll have more in our interview with Head Chef Domenico but basically if you find yourself without something to eat at Toyota Park, just turn the corner because you are bound to find something you will like.