So let me get this straight.... goals can be scored in these games?  There can be a winner and a loser?  These are novel concepts that make the game sound much more interesting and exciting.

Exciting it was too as the Chicago Fire grabbed three points just as the door was closing.  Cristian Nazarit's second-half stoppage time goal made the score Chicago Fire 1 - Columbus Crew 0 and that's how it stayed.  Outside of a couple of early chances for Columbus, Chicago dominated the game and denied the Crew from obtaining a shot on goal or even a corner kick.  The victory snapped an 11-game winless streak that dated back to March 26th.  Much more thoughts and analysis after the break.

The defense was at another level on Sunday.  Yamith Cuesta, Cory Gibbs, Gonzalo Segares and Sean Johnson have really got something going.  Those four have been the defensive starters for the last 360 minutes that have seen Fire opponents score just 2 goals.  Jalil Anibaba got the start over Bratislav Ristic at right back against Columbus and the young UNC graduate looked great taking on players and even contributed to the attack.  Cuesta deserves special mention because the 22-year old Colombian is stepping up big in all aspects of the game.  You can tell his confidence is soaring by observing little things like a sharp ground pass in the first half that blazed by a Crew attacker.  I thought it was too risky at first but Cuesta appears to know what he is doing and the pass resulted in a good opportunity for Chicago.

Cristian Nazarit scored his first MLS goal and Orr Barouch should be credited with the assist in your mind if not on the stat sheet.  Barouch made a great run with pressure from two Crew defenders before flicking the ball towards the net.  Columbus goaltender William Hesmer deflected the ball but right to the feet of Nazarit who easily converted the opportunity into a net positive for the Fire.  Both players continue to impress.

Logan Pause looks like a different player under Klopas.  You can see more of an attack minded energy.  Baggio Husidic put in a decent effort in his first start since the Philadelphia Union game (despite the fact the broadcast continually mentioned his last start was against Houston).  I wouldn't say he knocked Daniel Paladini out of his starting role but he put Corben Bone on notice for being the first central midfielder off the bench.  Gaston Puerari looked significantly better than I've seen him recently.  His four shots were a personal season high despite the fact that he was subbed out in the 67th minute and despite the fact that he put in 71 minutes on Thursday.

As much as Gaston Puerari looked great on Sunday, Diego Chaves looked inadequate.  It's not usually a good idea to apply training techniques to individuals who happen to be from the same country but in this case it may not be a bad idea to rest Chaves in the same manner Puerari has been the last couple of weeks.  Chaves is second on the team in minutes played while Puerari played 120 out of 360 minutes possible between May 14 and June 4th.  I'd like to see Puerari, Nazarit, and Barouch get some more time up front the next couple of games.  Chaves can build up some stamina as a sub.  It's possible that Oduro might get thrown into the forward mix when Marco Pappa returns from Gold Cup duty.  However, Oduro might stay at RM because Patrick Nyarko is still not looking his best.  His decision making is off too as he passed on a wide open shot right outside of the box in the first half but sailed a ball over the net in the second half on a shot from 30 yards out. 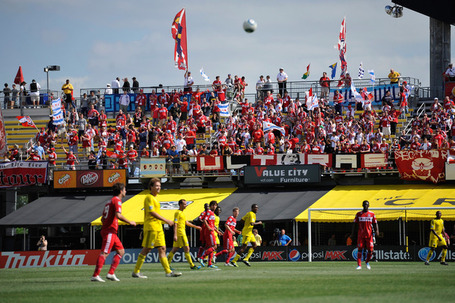 Over 400 Chicago Fire fans made the game feel like it was being played at a neutral location.  It was great to see the team invest in multiple buses to get that many people to this rivalry game.  I thought my favorite part of the game on Sunday was going to be the Section 8 and other Chicago Fire fans taking over Columbus Crew stadium but it ended up being the words of Frank Klopas.  Dan Kelly and Evan Whitfield caught up with the coach for a post-game interview and Klopas closed by saying:

I told the guys before the game that in the history of the Fire, we've had some great players but we've always been a team no one wanted to play against. We have that kind of personality and the players with this team. Let's get back to what the Chicago Fire use to be.

If anyone is still wondering why the Fire front office would agree to take the chance on Klopas being the interim head coach, I believe this is a big part of it.  The Fire use to be a team that no one wanted to play.  Klopas was a part of that tradition when he played for the Fire in 1998 and 1999.  Klopas' reign as coach has started off by shutting out opponents for 270 minutes in 3 straight shutouts.  There are big tests ahead but I'm beginning to see the Fire be what the Fire use to be.