The Chicago Fire and Quaker teamed up to create a unique and one of a kind press release that coincided with the big announcement at Quaker Plaza yesterday. The classic Quaker Oats canister received a Chicago Fire makeover and why not? If our jerseys can say 'Quaker', why can't their canisters say Fire? That gives me a great idea for limited edition Chicago Fire championship related Quaker packaging... but let's not get way ahead of things here.

The canister below was picked up at the event. However, soccer journalists from around the country might have found a package on their doorstep yesterday. 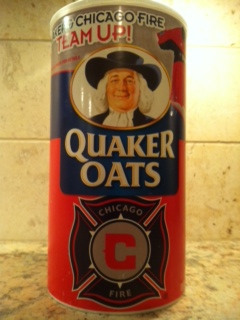 At first glance, this is a gimmick. A decent photoshop job. There are even jersey sponsorships in the English Premier League that look gimmicky and photoshoppish so perhaps this is the norm. However, the canister art looked top quality. The launch of this partnership is something that feels very authentic and organic. 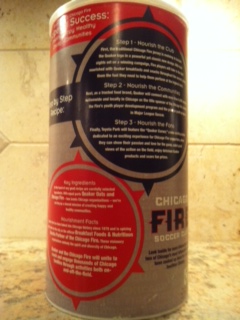 Turn the canister around and it's all Chicago Fire. It really hits that Quaker Oats' most famous product and the Chicago Fire share the same red and navy colors. 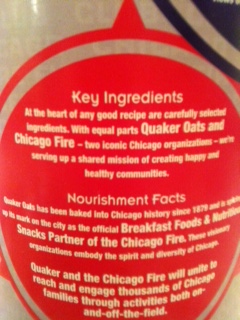 In a close-up of the red, there's a list of ingredients and nourishment facts as if this is a recipe.

At the heart of any good recipe are carefully selected ingredients. With equal parts Quaker Oats and Chicago Fire - two iconic Chicago organizations - we're serving up a shared mission of creating happy and healthy communities.

Quaker Oats has been baked into Chicago history since 1879 and is spicing up its mark on the city as the official Breakfast Foods & Nutritious Snacks Partner of the Chicago Fire. These visionary organizations embody the spirit and diversity of Chicago.

Quaker and the Chicago Fire will unite to engage thousands of Chicago families through activities both on-and-off-the-field."

That's not just some PR. That's two local institutions making a promise to their shared hometown. 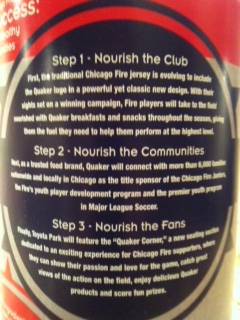 In a close-up of the navy, we see there are three steps listed as if to complete the recipe and ingredients.

First, the traditional Chicago Fire jersey is evolving to include the Quaker logo in a powerful yet classic new design. With their sights set on a winning campaign, Fire players will take to the field nourished with Quaker breakfasts and snacks throughout the season, giving them the fuel they need to help them perform at the highest level.

Next, as a trusted food brand, Quaker will connect with more than 6,000 families nationwide and locally in Chicago as the title sponsor of the Chicago Fire Juniors, the Fire's youth player development program and the premier youth program in Major League Soccer

Finally, Toyota Park will feature the "Quaker Corner," a new seating section dedicated to an exciting experience for Chicago Fire supporters, where they can show their passion and love for the game, catch great views of the action on the field, enjoy delicious Quaker products and score fun prizes."

This 'recipe' reads more like something you would find in a non-profit mission statement. In yesterday's article on St. Louis soccer, James Coston came away with the phrase 'more than just a check'. That certainly seems to be the case here. Quaker is a real Chicago community partner rather than just some mega corporate conglomerate that wanted their name on the shirt and asked the Fire 'how much?' and 'we need this, this and this'. No wonder the Fire reportedly turned down an offer for more money. This kind of partnership is priceless. 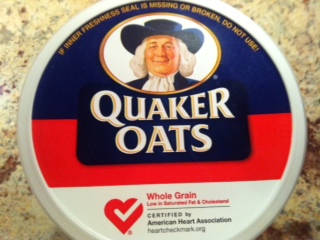 Finally ready to open up the canister, we see the top hasn't really been altered. That's fine. No need to. The Fire top has been changed enough. 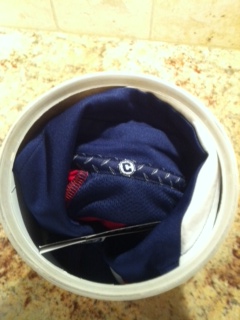 Speaking of the Fire top, there's a replica jersey stuffed inside of this canister. Nice placement of the 'C' badge being the first thing that is visible upon opening. 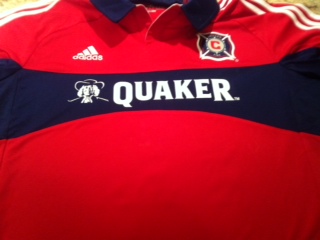 Here is the front of the jersey. We can see it's a replica jersey for sure because there's no star above the badge. I'm shocked they put a jersey inside at all. Quaker sure wanted to make a big splash. 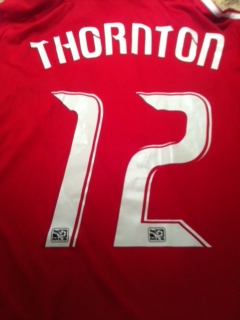 This is a nice looking Zach Thornton jersey. Unless... personalization would be really paying attention to detail and make a lot more sense, right? Well played team. 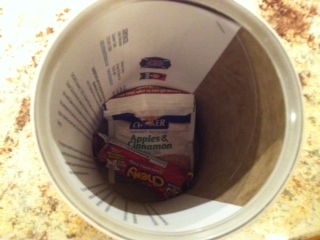 After removing the jersey we finally see there is a press release stuffed inside along with some Quaker products. 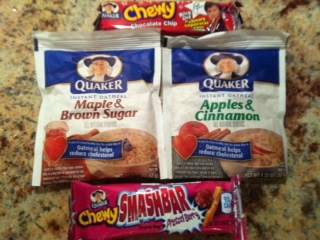 Two classic instant oatmeal packets, a sample of the very popular Chewy Chocolate Chip Granola Bar (Chicago Fire owner Andrew Hauptman said that was his and his children's favorite Quaker product yesterday), and something called a Chewy Pretzel Berry Smashbar. The latter sounds like a Willy Wonka invention gone wrong but it's a bold flavor experiment. I haven't tried it... and I may not but I am a fan of the other three items. 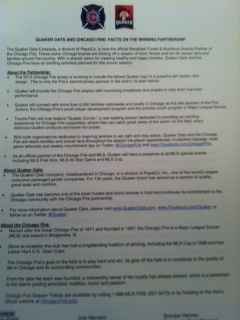 Finally, the press release itself. Here are the highlights:

"The Quaker Oats Company, a division of PepsiCo, and The Chicago Fire Soccer Club are kicking off a season of food, fitness and fun for the city's soccer fans and families. The club named Quaker as the official Breakfast Foods & Nutritious Snacks Partner of the Chicago Fire, and the centerpiece of the partnership is the new 2012 jersey, which prominently features the famed Quaker logo in a powerful yet classic design. This is only the Fire's second jersey sponsor in the club's 15-year history.

Throughout the partnership, Quaker and the Chicago Fire will team up to reach thousands of families, on-and-off-the-field and demonstrate the importance of eating right and staying fit. As part of this shared commitment, Quaker will provide the Chicago Fire players with nourishing breakfasts and snacks to help them fuel their performance throughout the season.

"It's an honor to partner with a trusted Chicago-based brand like Quaker Oats that shares the same sense of community as the Chicago Fire," said Chicago Fire owner Andrew Hauptman. "As a sports team, we know the importance of staying active, eating right and hope to inspire others to do the same. Our players are incredibly proud to don the Quaker name as they hit the field during the 2012 season."

For more than 134 years Quaker has had a longstanding tradition of keeping families happy and healthy both nationally and locally in Chicago.

"Quaker Oats has been providing nourishing breakfasts and snacks to families for more than a century. This partnership exemplifies our commitment to promoting a healthy, active lifestyle," said Jose Luis Prado, President, Quaker Foods and Snacks North America. "We are excited to work with the Chicago Fire to make a positive impact in the community and across the country."

As an official Breakfast Foods Partner of Major League Soccer (MLS), Quaker Oats will also have a presence at MLS First Kick, the MLS All-Star Game and the MLS Cup."

A creative, well thought out, and detailed release. A very encouraging start to a new Chicago partnership. We'll have more on yesterday's event itself but you can see that Quaker and the Chicago Fire have made some significant promises to the community that goes beyond the addition of Quaker's name and logo going on the Chicago Fire jerseys. The two Chicago institutions are working together in a very public way. They went to considerable time, effort, and expense to make sure Chicago and the soccer world are aware. They say you shouldn't judge a book by its cover but I'm very excited to see the benefits the next chapters of this story will bring.