How the Fire's New Sponsor Deal Compares to Other MLS Clubs

Share All sharing options for: How the Fire's New Sponsor Deal Compares to Other MLS Clubs

Well, this probably isn't an objective statement, but the Chicago Fire really have started off 2012 well...just in the same way that Quaker Oats breakfast products are a great way to start the day!

In all seriousness though, I can't remember a sponsorship providing such a boost to a club in general and to a fan base in particular. Many of the people I've talked to about this deal are VERY excited not just about the new jerseys and revenue, but also about creating a partnership with a local Chicago brand. But let's step back for a second to gain some perspective.

In 2008, the Fire teamed up with Best Buy to have a sponsor on their jersey for the first time in the club's history. This deal had less to do with the Fire's commercial appeal as a whole and more to do with a certain Mexican legend named Cuauhtémoc Blanco. Granted, the Best Buy deal was positive for both sides: Best Buy gained exposure in the Hispanic community in Chicago, the United States as a whole and in Mexico. The Fire gained revenue and the prestige that comes with being a big enough club that a brand will pay to have their logo on your jersey.

At the end of the 2010 season, the club as a whole had a bit of an identity crisis. At this point, the Men in Red had lost Blanco, Chris Rolfe, Justin Mapp, Nery Castillo, Fredrik Ljungberg, Brian McBride, Wilman Conde and C.J. Brown within a two-year span. In December 2010, Best Buy officially ended their sponsorship.

The 2011 season would be very critical for the club. Chicago didn't qualify for the MLS playoffs for the second year in a row but they reached the final of the U.S. Open Cup for the first since 2006 and they ended the regular season on a very positive note. This was a new team with a different attitude. A team that resembled Fire teams of the past.

When I spoke with head coach Frank Klopas recently, he spoke of a desire to once again make Chicago "a very difficult place to play." And that's what began to happen. Style and star power gave way to substance. Gritty performances began to become the norm. And the focus on Tradition, Honor, and Passion became less of a marketing slogan and more of a way of life for the club.

Moving into 2012, expectations are high. But this team is looking to win, on and off the field. When the Fire announced their partnership with Quaker on January 17, it became clear this club was moving forward and not taking a step back. This deal, worth a reported $8 million over three years, establishes credibility not only because of the revenue, but because it was done with a local sponsor with the city in mind.

The deal is not as high of a dollar amount as some other sponsorship deals, but consider this: a deal like this encourages growth. It encourages the Fire to continue to work with Quaker through the duration of the contract and potentially after. We can also hope that Quaker will take that "extra" money that isn't going directly to the Fire will be used for higher-quality and socially-responsible Fire initiatives in the Chicago community.

So yeah, you could say I like this deal a little bit. But how does it stack up to others around MLS?

The deal first announced by Crain's Chicago Business was for about $1.5M a year. A corrected report put the total figure at 3 years/$8M for an average of $2.67M a year. You should know more than perhaps you have ever wanted to about the Quaker sponsorship at this point.

None. Rapids president Tim Hinchey has stated that finding a jersey sponsor is one of the club's top priorities. He also claims that a handshake deal with a sponsor was not followed through on. The Rapids have never had a shirt sponsor.

None. Okay, Fire fans, laugh with me: bahahahahahahahahahahahaha!!! You have to wonder if their 2012 away shirt was designed with room for a sponsor in mind. As it stands, it's nothing less than an abomination. It looks like they gave up one/third of the way down. 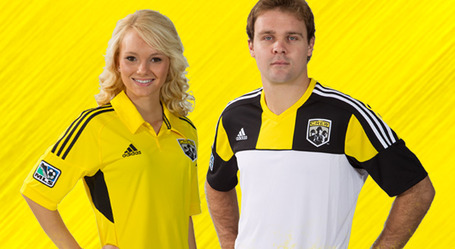 The Crew had paint manufacturer Glidden as a shirt sponsor from 2008-2010 in a deal worth a reported $1 million a year. But it appears as if the Ohio-based club will be going bare again this year. Hey, at least it'll be even more fun than usual to yell at them.

Chivas USA is one of those clubs that just never has seemed to have gotten completely off the ground. Every time they begin to build some traction, they do something inexplicably dumb like leaving defender Zarek Valentin unprotected in Impact de Montreal's expansion draft.

But with their sponsorship deal, they nailed it. Corona is a perfect fit for them. Guaranteed income? Check. Great Hispanic brand? Multi-year deal? Um yeah, this is a real winner. Shame the play on the field isn't as good as this deal.

Das sponsor. Another fabulous deal in the nation's capital as Volkswagen of America rewarded D.C. United with a five-year deal worth $14 million back in 2008.

In July 2011, F*C* Dallas claimed to be optimistic about finding a shirt sponsor before that month's MLS All-Star Game. Well, they're still looking. And to add insult to injury, they're now looking for a new stadium sponsor after Pizza Hut pulled its sponsorship last December.

The Dynamo currently have a good thing going with Greenstar Recycling and a five-year, $12.7 million deal dating back in 2010. They previously had a less lucrative deal with Amigo Energy from 2007 to 2010.

The granddaddy of them all. In 2007, the Galaxy signed a five-year deal with Herbalife worth somewhere in the range of $17.5 to $25 million in total. That deal appeared to have been extended into 2012 as their latest shirt was recently released. However, LAG Confidential's Josie Becker has told HTIOT that La Galaxy owner Tim Leiweke will not confirm that a renewal. We will have to wait a week or two for an announcement to tell us what is really going on in La-La Land.

When your name is Bank of Montreal (or BMO for short), what better way to build brand recognition than to team up with the newest sports franchise in the city? The five-year deal provides stability for the Impact and cements BMO's status as one of Canada's premier banks. More on BMO later.

The Revs got the sponsorship monkey off their back prior to the 2011 season by signing a multi-year deal with UnitedHealthcare. Financial details of the club were not disclosed.

I'll give you one guess as to who sponsors this team. Give up?

I could make a truly tasteless joke here, but I'll resist: the Union have a four-year sponsorship near $12 million with Mexico-based bakery Bimbo. The deal began in 2011.

Last I checked, Portland is not in Alaska. Nonetheless, the northwest soccer club chose the northwest airline in Alaska Airlines ahead of their inaugural 2011 MLS season. It is a four-year deal initially running through 2014.

When you think jersey sponsorship, do you think Real Salt Lake? No? Well, maybe you should. In late 2006, they became the first club to have an external sponsor on their shirt, naming XanGo to adorn the kit. (I don't consider Red Bull New York as the first shirt sponsor since they technically own the club. If you disagree with this assertion, I respect that.) That deal was extended in 2009 through the 2013 season.

Is San Jose at the end of their three-year deal with Amway? It appears so. The deal, worth $2-$3 million looks to be ending as a sponsor-less 2012 jersey was leaked. Also, Amway references have been removed from the club's website.

The kits may be polarizing in terms of style, but the dollar signs sure aren't: The current five-year, $20 million deal with Microsoft (Xbox 360) goes through the 2013 season.

Your guess is as good as mine. The only thing we have to go off is anecdotal evidence from the Kansas City Star. Although shortly thereafter, a 2012 shirt was released on the MLS gear website. These things can change though. The Sporting Kansas City store is apparently "sold out due to high demand." Pshhhhhhhhhhhh, yeah right. Why on earth would you not have merchandise for sale? Seems like marketing that's too smart by half.

The first Canadian MLS club's sponsor has a familiar name if you've read this from the beginning: BMO. Yep, Toronto was their first foray into shirt sponsorship and it apparently went so well that they picked up a second team in Montreal. BMO is the only sponsor of multiple teams. They also sponsor the club's stadium, BMO field. The initial jersey deal was for $1-1.5 million (CDN) over four to five years. It does not appear that sponsorship is going anywhere as it was extended in the middle of 2010 at over $4 million a year (again, Canadian dollars) through 2016.

The Whitecaps deal with Bell doesn't have any numbers publicly available. The communications company was named a "Premier Founding Partner" in 2010. Their 2012 jerseys are out.

When you look at sponsorships throughout the league, a few things stand out to me: