On a bright and sunny Saturday afternoon a contingent of Fire fans about 150 strong returned to Toyota Park for the Section 8 Chicago Annual General Meeting (AGM). While the Men in Red themselves were in Florida for pre-season, Section 8 along with many other Fire fans also began preparations for the upcoming 2012 season.

Before the afternoon's proceedings kicked off, Los Comales provided a nice selection of food and Staropramen offered beer to the eligible guests. While consuming these complimentary offerings, everyone took the opportunity to catch up after the long off-season or meet new fans.

After the jump, read about the board members' individual missions with a few surprise speakers, an informative Q&A session with two of the Fire's Vice Presidents, and the open forum where a few fans shared stories and concerns. 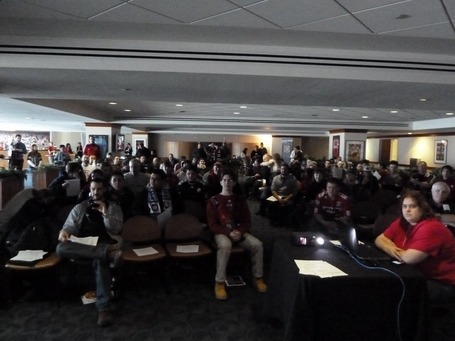 With everyone seated and settled, Fire President Julian Posada addressed the Fire faithful via pre-recorded video extending his thanks for everyone showing support to the team.

After that brief message, every incoming and outgoing board member had the chance to take the stage and address the crowd with their goals for the season. Chairman Tom Dunmore began the meeting with the microphone and when Joel Biden received the votes of everyone in attendance, Dunmore passed the metaphorical torch to Biden and a new Chairman took over. Biden welcomes the challenge of leading the Section into the new season and looks forward to individual efforts from anyone who wants to contribute to the support.

Next, Vice-Chair elect Jeff Marinacci presented a wonderful speech inspired by the Fire gnome with "Educate your friends and educate the newcomers", "Learn to take criticism", "Use spellcheck", and "Have fun no matter what you are doing". All are great tokens of wisdom to learn and help build the fan base.

At this time a surprise video call came in from Fire Head Coach Frank Klopas who stated his desire to be at the meeting and informed fans of the good first week of training and the players' desire to start the season. He also wanted to give special thanks to Tom Dunmore for his efforts (Dunmore was chairman for two years and vice-chairman a year before that) and welcomed the new members of the board.

Josue Gomez returned to his post as Director of Events and noted the Section 8 Holiday party was a great way to end 2011. The indoor soccer tournament was a great way to start 2012. Future plans for 2012 include the Season Kickoff Luncheon and after party. Gomez also hinted at a possible bowling event. He proposed this season will include better watch parties with new bars and new partners to accommodate Fire fans watching away games from home. There will also be the return of Dock Fridays and a beach soccer tournament around the All-Star break.

Mario Ortega took the stage next returning to the position of Director of Finances. Ortega cited scarf sales as a major contributor to help support bus trips to Columbus, Kansas City, and Toronto. A check was then presented for $15,830 to the Chicago Fire Foundation. Finally, he challenged the fan group to find more people to support the Fire and said any effort to grow the section will get the board's support.

Marty Groark made a brief speech as the Director of Marketing, a new Board position passed by the fans earlier in the meeting. Groark stated he aims to bring more people to the club, $20,000 donation. He emphasized his plan to utilize the Section 8 social media more effectively and would like to see fans share their articles with friends to help grow the Section with more new people.

Kayla Yost claimed the microphone next and began her reign as Director of Merchandise. Her agenda for this season includes starting a small line of women's clothing, creating a city pride scarf, and holding a T-shirt design contest by the supporters for the 15th Anniversary celebration on October 8th. After Yost's presentation, Biden observed the Section had come a long way from the old days of selling merchandise out of a duffel bag. Now, Section 8 sells a wide array of merchandise on their website and at pre-game tailgates.

The returning Director of Communications Dan Martin addressed the attendees looking for writers who have something to say about the section or team with the ability to form a coherent sentence as the only necessary job requirement. He also mentioned plans to create a new version of the website in the near future.

Before giving up his post of Director of Operations, Michael "Giaco" Giacometti thanked everyone for allowing him to hold the position for the last three years. In an honest assessment of his efforts, he claimed, "There were times where we didn't do what we needed to do. The next group hopefully will learn from what we did well and where we failed and build on [what we have done]."

The new Director of Operations Brian Cost shared his story of how he became involved with Section 8. He found it encouraging to see people show up and care about the club and is glad to be a part of the team, come to board meetings, and translate passion of fans to inside the stadium.

After a brief break, Vice President of Ticket Sales Mike Ernst and Vice President of Marketing and Communication Emigdio Gamboa answered questions anyone had to ask and presented a letter from Chicago Fire owner Andrew Hauptman expressing his appreciation to the fans for their service to supporting the club. Hauptman's letter meant that five top Fire employees had addressed the AGM in some fashion.

After that bit of good news, other notable items came from the Vice President Q&A session, The locker room discount sale is still planned, but the transition between new and old uniforms and gear have delayed plans for now.

The floor then opened for questions, comments and concerns from the fans and Flynn Murphy was the first to step up offering a heartwarming story. Several years ago, he gave a sample to an organization looking for bone marrow donors. Recently the organization contacted him and Murphy donated marrow to a 10-year old girl afflicted with disease. He credits his contribution to the Section 8 community as it gave him the opportunity to change someone's life for the better in a major way.

Former Chairman Marcin Tlustochowicz expressed concerns over distracted fans in the Section citing an "orgasmic love" of cellphones as the main reason of distraction. He continued that the attention of the fans should be supporting the team on the field for the full 90 minutes, not chatting with friends next to them.

Finally, to close out the ceremony, DJ Racis said his farewell to the Fire faithful as he will be moving to Reno at the end of the week. DJ managed to share a few more laughs with everyone as he recounted a few stories over the past few years uncut and highly entertaining. When the Fire play at San Jose on July 28th, DJ will be representing the Fire fandom and welcomes anyone else interested in travelling to join him.

This was my first Section 8 AGM, but what I heard from long standing fans and board members this was certainly the best. The Section has become a life of its own with new people contributing to making everything involving Section 8 work. That represents the ethos of this current board: Take initiative, ask for help if needed, and show the new followers how to support the Chicago Fire.