Berry Life: A Cereal for Rookie of the Year

Another Quaker Oats product has been Chicago Fire-fitted

Share All sharing options for: Berry Life: A Cereal for Rookie of the Year

Pre-season talk about the Chicago Fire's defense revolved around the return of Cory Gibbs and Jalil Anibaba in the middle. Rumors that former German international Arne Friedrich would sign with the Fire added intrigue to an already solid situation. Would Friedrich start over Gibbs or Anibaba? Would head coach Frank Klopas prefer to team Friedrich up with Gibbs pitting Dan Gargan and Anibaba against each other at right back? Chicago fans were elated to discuss such fine options after two years of having rather thin choices in the back.

One player that almost no one talked about was 2012 First Round MLS SuperDraft selection Austin Berry. The 23 year-old University of Louisville graduate was the 4th or 5th guy on the center back totem pole. Many fans were even upset when Klopas selected Berry with the 9th pick overall pick. Since the Fire had Anibaba and Gibbs, they wondered why take another central defender with that valuable first pick when the forward ranks were rather thin.

No one is wondering that now as Berry's solid performance has arguably saved the Fire from being out of playoff contention this year. It's what makes him a prime candidate for MLS Rookie of the Year. In case anyone overlooked this fact, the Chicago Fire Communications Team and Chicago Fire sponsor Quaker teamed up in a very creative way to make sure everyone had all the right facts before going to the Rookie of the Year polls this fall.

The first thing I received was notice that I had a gift arriving. Given the fact that my birthday isn't for a few months, I figured it was probably something Fire related. 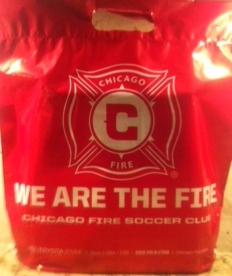 Correct. A bag from the team store. 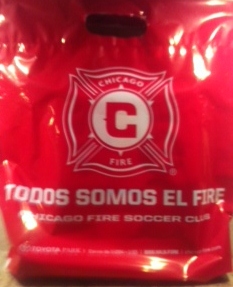 Bags from the team store are bilingual.

Upon opening the bag, I was greeted with the latest Fire-fitting of a Quaker product. 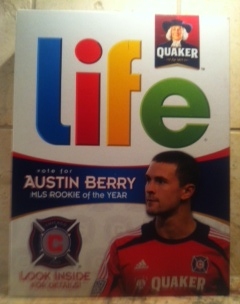 After making obligatory "Quaker has a new Berry Life flavor?" and "Is this Berry Life?" jokes, I grabbed a piece of paper out of the bag. 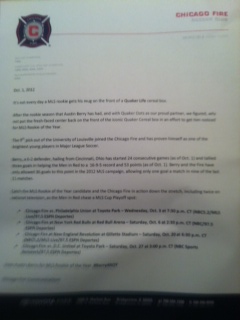 It's not every day a MLS rookie gets his mug on the front of a Quaker Life cereal box.

After the rookie season that Austin Berry has had, and with Quaker Oats as our proud partner, we figured, why not put the fresh-faced center back on the front of the iconic Quaker Cereal box in an effort to get him noticed for MLS Rookie of the Year.

The 9th pick out of the University of Louisville joined the Chicago Fire and has proven himself as one of the brightest young players in Major League Soccer.

Berry, a 6-2 defender, hailing from Cincinnati, Ohio has started 24 consecutive games (as of Oct. 1) and tallied three goals in helping the Men in Red to a 16-9-5 record and 53 points (as of Oct. 1). Berry and the Fire have only allowed 46 goals to this point in the 2012 MLS Campaign, allowing only one goal a match in nine of the last 11 matches.

Catch the MLS Rookie of the Year Candidate and the Chicago in action down the stretch, including twice on national television, as the Men in Red chase a MLS Cup Playoff spot:

[Insert long list of upcoming games and their television information]

Vote Austin Berry for MLS Rookie of the Year. #Berry4ROY

Clear, concise, where to view Berry in upcoming games. Solid.

I then rotated the box to check out the rest of the story. 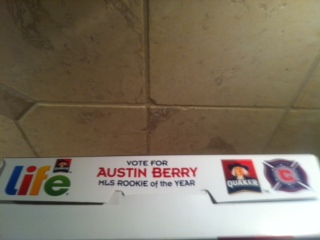 The top of the box for the fellow detail aficionados out there. 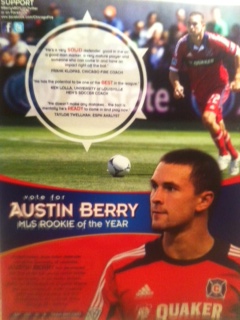 On the back of the box:

"He's a very solid defender, good in the air, a good man marker, a very mature player and someone who can come in and have an impact right off the bat." - Frank Klopas, Chicago Fire Coach

"He has the potential to be on the best in the league." - Ken Lolla, University of Louisville Men's Soccer Coach

"He doesn't make any mistakes... the fact is, mentally he's ready to come in and play now." - Taylor Twellman, ESPN Analyst

A hard-nosed, blue collar defender out of the University of Louisville, Austin Berry has developed into one of the top young center backs in the country. In his rookie season, Berry has showcased his physical talents, skill and composure under pressure while earning a starting role and contributing to the success of the Chicago Fire defense.

It seems a little odd to have quotes from Klopas and Berry's college coach. Isn't that be like having quotes of praise from the publisher and the editor of a book on the back cover of that same book? Their quotes and Twellman's comments are great but it seems like they could have gotten other analysts and/or opposing players in on the action.

Still, the strong case continues. I find the stats as of Sept. 10 to be most helpful to the cause. 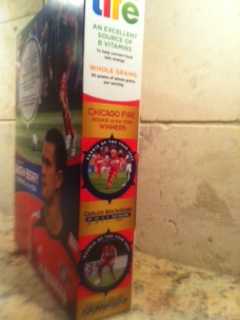 One side of the box highlighted previous Chicago Fire Rookies of the Year:

It's easy to forget what a monster year Ralph had for Chicago in 2003. Austin Berry would become the 3rd Chicago Fire Rookie of the Year. If he won, this would also mean every time the Fire have had a Rookie of the Year, the team has won 50+ points.

At the top of the box it said: "life - an excellent source of B vitamins - to help convert food into energy - whole grains - 20 grams of whole grains per serving." 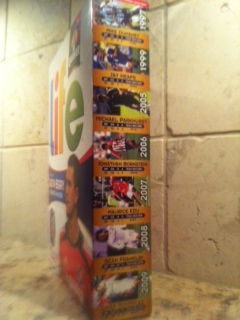 Austin Berry is in line to better, equal, or be within a skipping stone of worth to everyone on this list. His impact to the Fire's 2012 season has been critical. It's interesting to think about the career progression of the players on this list along with the careers of Bocanegra and Ralph. Many of these players have gone on to play for international teams (club and country). Even if Berry is edged out for Rookie of the Year, his surrounding company brings up interesting conversations for upcoming years. 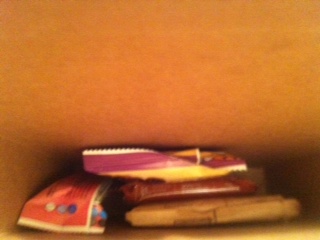 Finally time to crack this box open. There's a couple of Quaker treats inside. 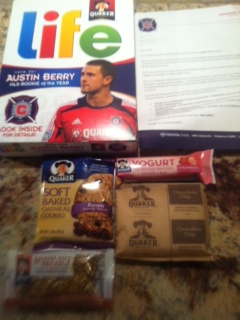 The complete package also includes a soft baked oatmeal raisin cookie, a chocolate chip oatmeal packet, a banana nut flavored soft baked bar, and a strawberry yogurt covered granola bar. I was a little surprised they didn't put emphasis on the strawBerry or any other berry products. However, Quaker's wheelhouse is oats, oatmeal, and chocolate.

Austin Berry's Life cereal box was the second marketing collaboration that incorporated a historic Quaker product with a Chicago Fire twist. When the Quaker sponsorship was announced, the Chicago Fire were prominently displayed on a Quaker Oats Canister. Here are the two items side-by-side. 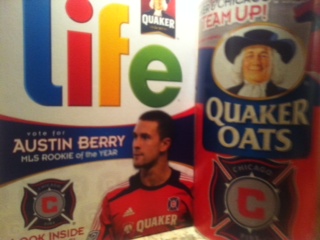 We'll take a look at the top Rookie of the Year Candidates and Quaker's sponsorship later on (and separately) but it's very encouraging to see Quaker continue to be involved at this level. There seems to be a real connection between club and company. It makes you wonder what cross-promotion will come next.