Matt Mason: Hiker With A Cause

Share All sharing options for: Matt Mason: Hiker With A Cause

The chant ‘Urbs in Horto Magico' is a favorite among the Fire fan base. Its powerful words and upbeat tempo help make it a consistent selection from the organized chaos of the capo stand at Toyota Park. Opposing fans have likely heard Urbs in Horto Magico from the Fire faithful too. As the last line declares, "For the Fire we will travel anywhere".

That rallying call has been taken to the extreme recently. Inaugural season ticket holder Giovanni Savaglio took the Chicago Fire flag to the North Pole in 2011. A hearty group of fans traveled to New Orleans to watch the Chicago Fire take on Real Espana in preseason action earlier this month. Trips before, in between and in the future will all add their own unique pages to the ongoing travel log. One of they very next quests belongs to Matt Mason who will attempt to hike the Appalachian Trail in the name of the Chicago Fire Foundation. After the jump, read about the herculean task ahead of him, what he plans to do to prepare, and how he will keep up with the Fire throughout his journey.

At the end of February, Fire fan Matt Mason will endeavor on a grueling hike through the Appalachian Trail. To give some perspective on this daunting task, the Appalachian Trail starts at Springer Mountain in northern Georgia and extends 2,184.2 miles through 14 states to Mount Katadhin in Maine. Mason will attempt to conquer this path to raise money and awareness for the Chicago Fire Foundation. Because the trip itself is such an incredible undertaking, Matt keeps his goals modest and honest.

" The Appalachian Trail has a less than 20% completion rate. My goal is to hike as many miles and raise as much money for the Foundation as possible, if that means making it out of Georgia, that's great - if it means getting to Mount Katadhin, that's great too."

Matt has been a hiker for many years and taking on the Appalachian Trail is a common topic of conversation amongst other hikers. He is also not a stranger to the Appalachian Trail having hiked a couple segments before in Tennessee, North Carolina, and New Jersey before going to Red Bull Arena in March of 2010. When he returns, however, he will attempt to "thru-hike" the trail and at an accelerated pace.

"The average thru-hike takes anywhere from four to six months. I am hoping to complete mine in four and a half months - which is still a fast hike. I plan to hike about 17 and a half miles a day. " Mason claims the challenging tempo is to cut down on costs of food, lodging, and supplies, but to transition into a new job as well.

"I also start working for an outdoor education center in Western Michigan in late August/early September - they understand what I'm undertaking, but I don't want to cut it too close to that deadline. Going from trail life right into living/working there might be too much of a transition."

"That statement is completely true," states Mason. "Living in Northwest Illinois is one of the more hilly places in our state [and it is] a good place to train. I hiked lots of miles with my pack on at local State Parks and preserves. Once snow came, I decided to start training indoors. I work out about an hour and a half a day on the elliptical machine, stair climber, and a treadmill with the incline ramped up."

Matt has honed his outdoor cooking skills in preparation for having to eat in the middle of the wilderness and has the experience of backpacking classes for school credit to enable him to cut his pack weight to just under 19 pounds instead of the usual 50 pounds. Matt does plan to bring a certain special item with him throughout the trip.

"I will be hiking with a Fire flag through the entire length of the trip. Originally, I wanted to take a scarf, but [because of] the weight I opted for a flag. A flag is about four ounces lighter than a scarf and will take up very little room in my pack compared to a bulky scarf. For each state line I cross, I will take a photo with my flag."

Being in the wilderness during the beginning of a new, promising season may be maddening for any hardcore Fire fan, but Mason does have an idea on how to keep up with the team while hiking. 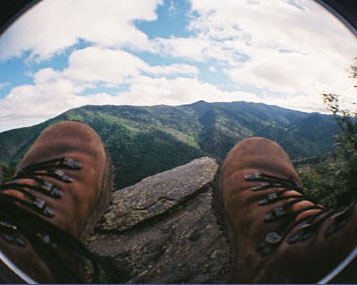 "Since cell phone service is next to nothing on the trail, I will be able to check out the results when I stop in towns. If I time it right, I will be staying in a town while the boys are playing to catch a live stream."

Furthermore, depending on the timing of his hike he may even make it to the June 2nd Fire away game against New England, the same New England team the Fire played when he stood in Section 8 for the first time.

"My first match in Section 8 was March 2007 against New England. That 1-0 win changed my life forever. It's cliché, but it's true."

While Matt is looking forward to joining the Fire contingent in June, he knows they already are supporting him to make the trip for the Chicago Fire Foundation.

"I've had a wonderful response from the Fire community. I want to thank all of the ISA Board members, both current and former. They have been 100% supportive since the very beginning. The Fire front office has been great about the whole thing as well as all of the Fire fans that have given me words of encouragement. I appreciate it all.

"My family has been supportive of my trip - many of them were not surprised. I have been living and working in the outdoors for the last eight summers. My friends that enjoy hiking and outdoor activities have been great. Friends that enjoy the creature comforts of life still think it's pretty cool."

Matt Mason's efforts for the Chicago Fire Foundation will certainly go down in Chicago Fire supporter history. He encourages you to be a part of his journey too by making a small contribution.

"Please go to the Section 8 store and donate. All money will be donated to the Foundation. It's amazing how fast those $5-10 donations add up!"

We here are Hot Time in Old Town wish Matt Mason the best on his journey. If all goes well, Mount Katahdin just might see dreams in red, dreams in white and Fire shouts into a July night.