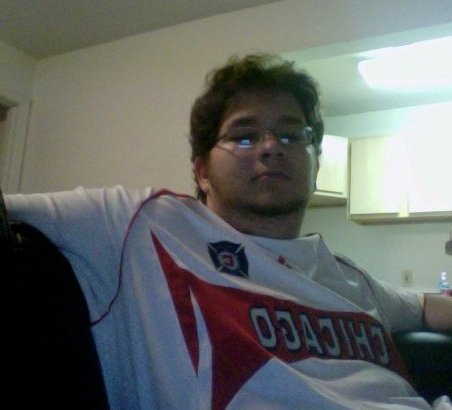 Hi. My name is Ruben Tisch. Some of you may know me for the lively game thread commentary I provide most Saturdays on this very site. Others may know me from twitter, where I mostly talk about MMA, one of my other sporting passions. Others may know me from the blatantly false and unquestionably idealistic rumor mongering (Notably Carlos Tevez and Joey Barton) usually for laughs. Others still, may know me on the Section 8 forums, wherein on my first day, I jumped into the "What color is orange Juice debate." A Few of you may even know me in real life, although that’s unproven as of now. This post is an introduction of sorts, an Intro to me, and what I'm all about.

My soccer story starts like most in this country, the 1994 World Cup. My dad was able to acquire tickets to the Bulgaria/Greece match, where ironically, future Fire striker Hristo Stoichkov scored two goals… I guess he must have liked the Soldier Field grass. I don’t remember them though, or the game at all really. I was three.

I then proceeded to forget about soccer for a while, and really who could blame me? The west side and God- otherwise known as Michael Jordan, lured me to ball, and I fell in love with with the game, a love that still burns bright. Of course, the following years, the Fire were formed, and I, my dad being a fan, (though rather oblivious on the day to day) went to games. I had a good time, and I liked the sport. But for some reason, it didn’t stick. I don’t know if it’s because I was too young, or I was concentrating on sports I actually played (basketball, and baseball), but it didn’t really stick.

But then the 2006 season happened. That team was magic. CJ Brown, Chris Armas, and Andy Herron, and my two favorite Fire players of all time- Thiago, and Chris Rolfe. I was there the night they beat LA for the fourth US Open cup. My dad and I were sitting in the south east corner, to the right of Section 8. Every time Landon Donovan missed a shot or flubbed a pass -"Just like Germany", Then the goal song. It was like stepping into Hogwarts for the first time.

They brought me back. I was in for the Fire. I spent the next three years in the back of the section, out of the way, learning the songs as I heard them. And as I was ready to join in, feeling the confidence, and feeling like I was old enough to belong, I got accepted to my dream school, the Reynolds School of Journalism at the University of Missouri. It was a no brainer really, So, I packed up, armed with an apple computer and a bookmark folder full of illegal soccer streaming websites so I could watch from afar, hoping that the new found passion- growing steadily since 06- could somehow cosmically reach the team.

And so, here we are. Last year, HTOT started, and I found it because I frequented SBNation sister site Bloody Elbow- an MMA community. Using BE poster Rollo Tomasi as inspiration, I decided to liven up this joint. Use visual aids as much as words to comment on games, say dumb things for a laugh, and maybe a unique insight that some may not think of. I comment on the production and presentation of the broadcast as much as the game itself. That’s what I want to do with my life, after all.

To those who are new to the site; Welcome to the show. I hope you enjoy, and request your participation. Got something to say? Lay it down. See what sticks. If you want to lurk, that’s fine too. But remember our purpose, and hold dear what we as a club stand for. Have passion for The Club. Honor those that came before, and those that will come after. Keep the tradition alive, embrace the red and white But most of all, have fun with it. It ain’t school you know.
"Make 11 into 1, make us proud, and let Chicago be known for all time."-Brandon Kitchens

Ruben Tisch is currently studding English at the University of Missouri after being a life long Chicagoan. You can find him at https://twitter.com/rtisch312