Share All sharing options for: Post-Match Chalkboard: Triumph in Toronto

When it comes to looking at the passing statistics in Opta, there tends to be a bubble around the attacking penalty box. This makes sense as players aren't typically looking to pass the ball in that area. It's interesting to look at each team and to see if any trends appear. For Chicago, the team likes to pass the ball close to the top of the 18 near the corners of the box, but rarely do anything along the flank of the penalty box or near the penalty arc.

To give an example of what is a typical from Chicago (or has been at least consistent since late last year). I've included the pass chart from game 2 against Philly after the jump. 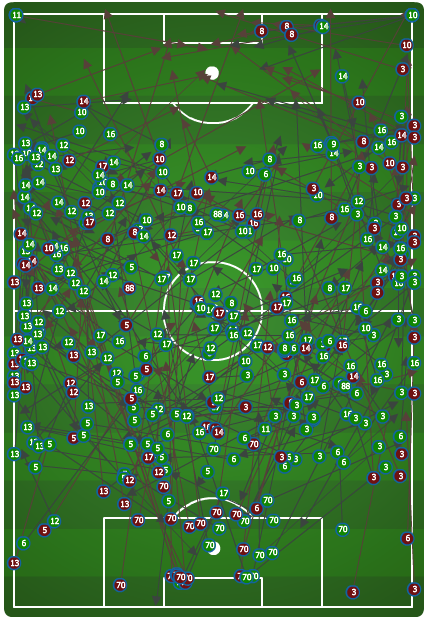 Above is typically how a Fire game looks. A lot of passes tend to come from the corners of the box. I have to admit, I don't know why this is, but it's something that I'm going to start paying attention to. As usual, there is rarely any crosses coming in from the flank of the penalty box. Now, time to look at last Saturday in Toronto: 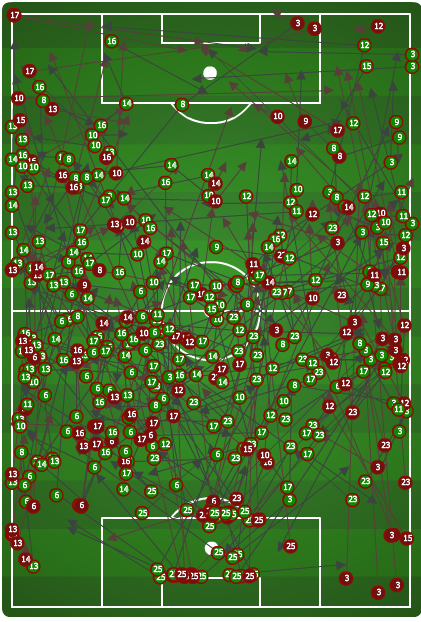 Notice the the giant bald area between the center circle and the penalty circle? It seems odd that only 7 passes would be attempted there, but after re-watching most of the game, Toronto tends to bunch together in the center of the pitch making things pretty crowded. Additionally, Pardo usually gets involved in the attack around this same area, but on Saturday, Pardo didn't contribute much offensively: 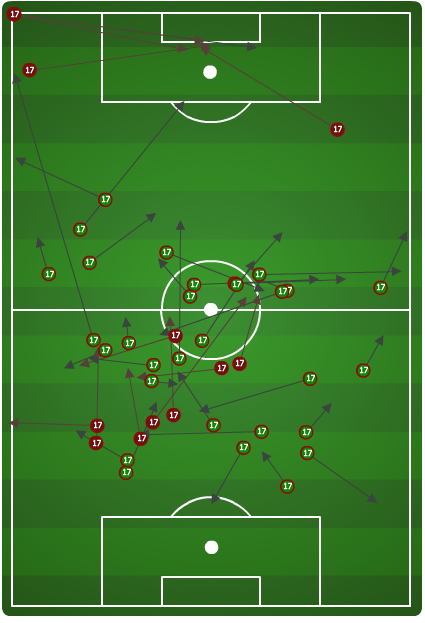 Pardo typically attempts more passes in the attacking half than this. On a lot of plays, he is the one who gets things going. I think the reason he didn't get as involved is because the Fire didn't attempt to build up play very often in this game. Instead, there were long stretches of time where Toronto controlled possession, and the Fire would do their patented chuck and run whenever they got possession.

The chuck and run counter attack worked out well in the 58th minute when Nyarko was able to get free, but most of the time, the Fire were just giving the ball back to the opponent. At times, it feels like Fire get stuck into a repetitive loop of counter attacking. While counter attacking is the team's strength, occasionally slowing things down and holding possession doesn't hurt.

The good things that came out of the Toronto match was that the team appears to be getting more into a groove. When the team does have possession, they're able to create a lot of chances. The finishing still needs some work as this game was very close to being a blow out.

Lastly, Arne Friedrich and Jalil Anibaba are looking like a great pairing in the back. Jalil has definitely taken the next step in his development. Arne was really fun to watch against Toronto. He seemed to be in all the right places at all the right times. I know Arne has made it known that Chicago is more than likely a stop-over on the Arne Friedrich Comeback Tour, but I'd be more than delighted if he decided to stay a little longer.