Post-Match Chalkboard: Was that a bad April Fool's joke?

Share All sharing options for: Post-Match Chalkboard: Was that a bad April Fool's joke?

The first loss of any season in any sport hurts. It's that first loss that puts doubts in a fan's mind and makes all of the hopes and dreams from the off-season fragile. I'm not sure how the rest of you are doing after this first loss of the season, but I'm still feeling pretty down. The reason I'm feeling down is because the Chicago Fire team we all witnessed on Sunday looked very much like last year's squad at mid-season prior to the acquisition of Dan Gargan, Pavel Pardo and Sebastian Grazzini. I'm going to try to dissect what happened in Colorado, but it's going to result in more questions than answers.

We had no offense on Sunday at all. Our midfield was beat, our defensive backs could not push the ball up the field and Oduro was a man stranded on an island all alone. When it comes to registering statistical points* (I.e. pass, shot, tackle, loss of possession, ect.) on the Opta Chalkboard, Oduro had 43 points in Montreal and 53 against Philly. Against Colorado, he managed only 28 statistical points.

Throughout the game, the Fire struggled to get service to Oduro. After the Fire went a goal down, desperation set in and the team lobbed long ball after long ball up to Oduro in hopes that he could get on the end of one and make something happen. Sadly, he was being shadowed by Marvell Wynne who seemed to snuff out every attempt.

Statistical points don't necessarily indicate good things. Players can get a statistical point for a completed pass or and uncompleted pass. While these points cannot be used to determine whether or not a player had a good game, they can help determine how involved a player was in the game. From there, I think it's safe to assume that the more involved a player is in a game, the more impact they had on the game. Here is how involved Colorado's midfield was:

Notice how everyone except for Castrillon and Cascio are above 100? It's hard to group Cascio into this because he played higher up the pitch with Cummings for much of the match. For Rivero, this was his first MLS start, and he has a lot of Colorado fans excited after what he did on Sunday playing as an attacking central midfielder. Larentowicz has been getting praise so far this season for being the defensive linchpin in the back of the midfield and it showed on Sunday. Not only was he stout defensively, but he also attempted 80 passes on Sunday and completed 75 of them. I'm half tempted to re-watch the match and count every single one of his passes just to make sure this isn't some April Fool's joke put on by Opta. Just for fun, here is what 75 out of 80 passes completed by one player looks like on an Opta Chalkboard: 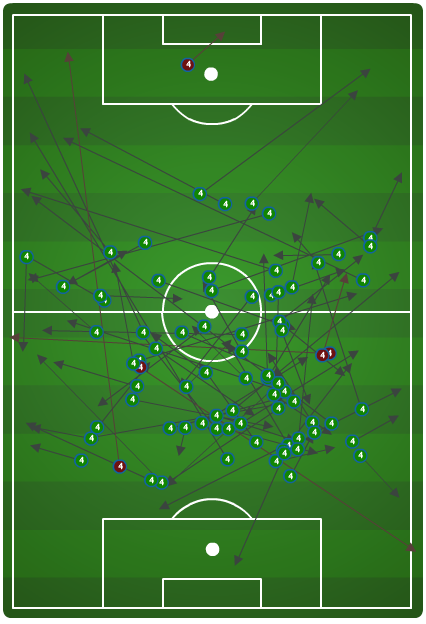 So now that we've looked over Colorado, here's the Fire starting midfield for comparison:

One conclusion I'm willing to make right off the bat is that it's probably not always a good thing if your central defensive midfielder is getting more involved than your attacking midfielder. Both Pappa and Robayo were subbed off, so they did not play the full match. Robayo put in 61 minutes. His replacement was Daniel Paladini, who ended up with 42 statistical points in 29 minutes. What's even more interesting is looking at the passing pattern of the Fire midfield throughout the game: 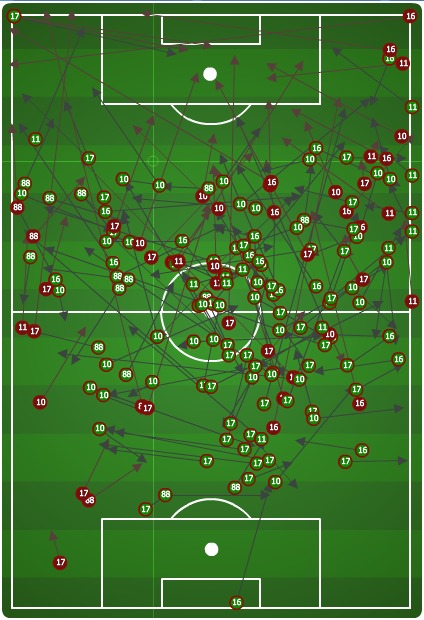 Notice how sparse Robayo's side is on the left? I'm not ready to blame Robayo's lack of involvement completely on him. Kosuke Kimura and Brian Mullan were difficult to deal with, and the Fire midfield chose to attack the opposite side. As I mentioned, Tony Cascio was playing further up the pitch, and Jaime Castrillon tends to stay central on the pitch, which leaves left back Luis Zapata doing most of the defending. Zapata had 102 statistical points for the match which was the most by a non-midfielder for the Rapids.

During this match, Nyarko dropped further back into the midfield than he usually does. My guess is that he did this to help to the struggling left side out and get the ball up field. For an entire 90 minutes, Nyarko only attempted 3 passes anywhere near the penalty box. That's not acceptable from a striker. 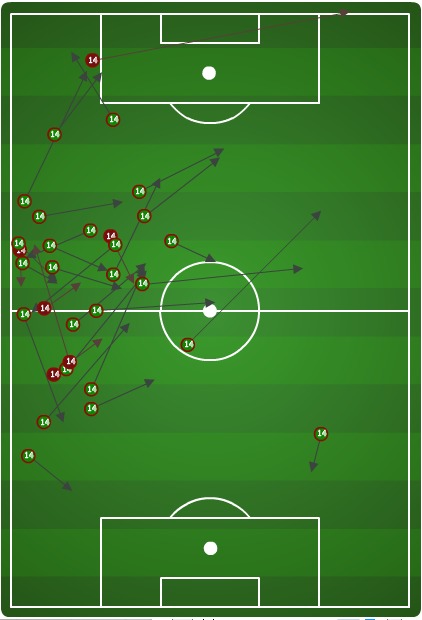 On top of the movement from the midfield, there was also the play from the backs, or lack there of. On the midfield graphic posted above, the midfielders were attacking the right side of the pitch. Here is where the absence of Dan Gargan comes in to play. So far this season, Gargan has been one of the most active Fire players on the pitch, especially when it comes to moving the ball up field. Gargan was replaced on the side by Logan Pause, which was a bit of a drop off offensively. To illustrate, here is Gargan against Philly earlier this year: 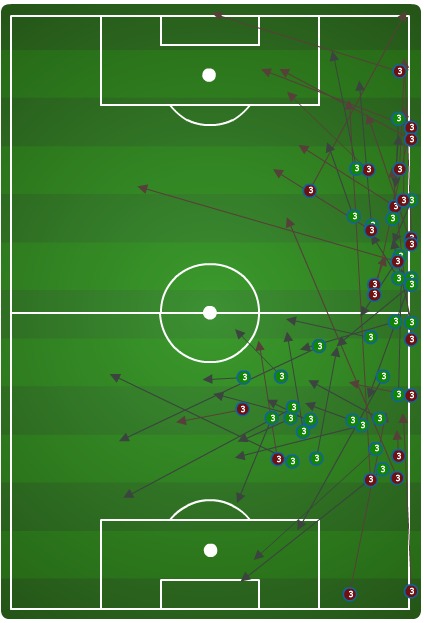 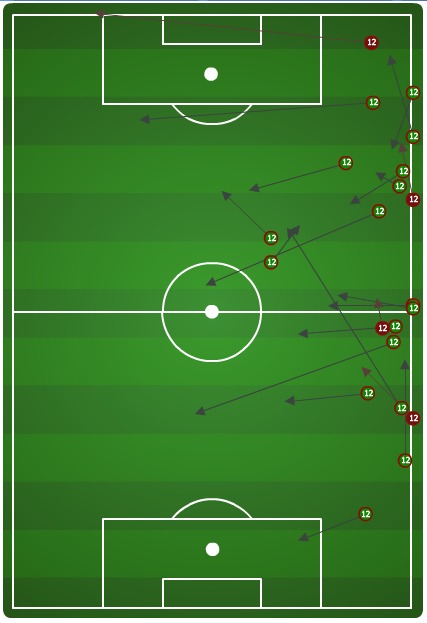 Out of all the passes that Logan made on Sunday, very few of them are anything that could be called threatening. I've seen other Chalkboards where Logan was playing right back, and he tends to generate a little more offense than this. Part of me wonders if all of the midfield activity on the right side made thing too crowded for him to do anything but hang back. Another part of me wonders if Gargan would have done more. If Gargan was able to aid the attack like he has done in the previous games this season, it may have forced Castrillon to play more off to the wing to help out Zapata, which would have opened up the middle of the field more and allowed Grazzini more space to work with.

Meanwhile, on the opposite side of the pitch, here is what Gonzalo Segares put together 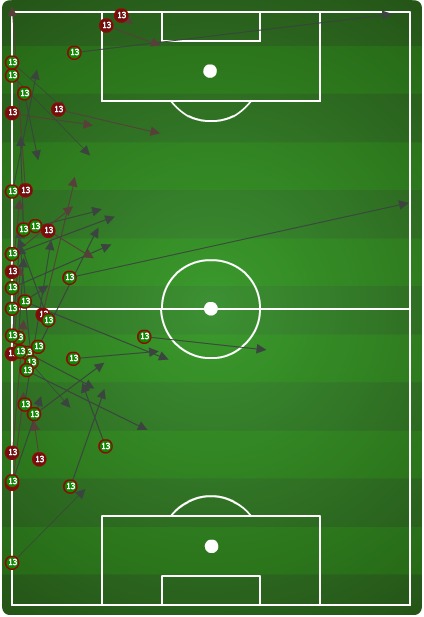 This is also a bit of a lackluster performance by Segares, and is the second below par offensive performance from Segares in a row. He had a few good moments against Philly, but he did essentially the same thing against Philly as he did here. He seems to get stuck around midfield. Between Nyarko dropping as far back on the left as he did, Segares getting only to midfield and Robayo not doing much of anything, the left side of the midfield was a mess. Kosuke Kimura and Brian Mullan had taken over that side of the field.

So here are some of the questions that I'm seeing: Did we just really miss Gargan and Sunday's debacle was a just a chain reaction to his absence? Was Robayo ineffective or was this just a tough match up and he'll do better next time? Should Nyarko even be playing as a forward or was this just a game where he got sucked out of position? If you think you have answers, feel free to put them in the comments.

*=I just want to clarify that I do not know what they are actually called. Statistical points is just what I call them.