What Is The Meaning of Tradition, Honor, Passion?

Share All sharing options for: What Is The Meaning of Tradition, Honor, Passion?

"There are three words that we go on" CJ Brown said on Wednesday night, moments after he became the seventh man to join the Ring of Fire. "Tradition, passion and honor."

Nobody exemplifies those words better than CJ. He might not have been the best player in Fire history, but not one person sweated more, pushed more, exemplified better the badge and those words it is supposed to represent than CJ in his 372 games for the club.

Sadly, Wednesday night’s ceremony was tarnished by the absence of the man who created that badge, the club’s founding general manager and the first Fire fan, Peter Wilt.

It reminded me that I wrote about those words – tradition, honor, passion – three years ago, shortly after Chris Armas became the sixth member of the Ring of Fire that season. That was a great night at Toyota Park, a joyous occasion despite the pouring rain: Chris was welcomed into the ring by existing members Bob Bradley, Piotr Nowak, Frank Klopas and Peter Wilt. 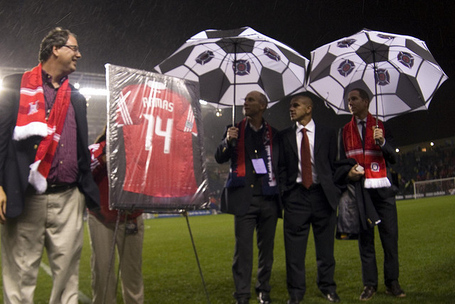 The Ring of Fire is exemplified by these men, and seeing as many as possible there to welcome in a new member to what the Fire itself have decided should be a more exclusive club than originally intended ought to make it all the more special.

Obviously, the coaching responsibilities of other members like Nowak and Bradley may have made it impossible for them to attend last night, though it wasn’t made clear whether or not the rest of the ring had been invited. Chris Armas was there, and delivered a fitting speech to welcome in CJ. Both Chris and CJ went out of their way to mention Peter Wilt.

But where was Peter Wilt? Not on the field, standing aside as CJ joined him in an entity that ought to embody those words "tradition, honor, passion" more than anything with the Fire. Uninvited to the ceremony, he was in the stadium he got built, watching with the dignity he always shows for the Chicago Fire from the sidelines.

To speak of "tradition, honor, passion" and to snub the very meaning of it – especially at a moment that should have been all about CJ Brown – makes one wonder why we spend so much time supporting this club through thick and thin.

The irony is, nobody has been a bigger inspiration for people like myself who have been part of Section 8 Chicago to support the club despite the difficulties encountered than Peter Wilt himself. Since his firing in 2005, Peter has occasionally disagreed with the club, critiquing the hirings of both Dave Greeley and Carlos de los Cobos, also questioning unilateral rule changes to the Ring of Fire that took it under ownership’s control. Those were difficult but fair questions, written about honestly and openly.

Behind the scenes, nobody inspired me and many others to work to support the club more than Peter, both by example and by sage words that often allowed us to see a front office perspective, and understand not everything can be done the way fans want. It was Peter who proudly purchased the 800th Section 8 season ticket before the start of 2010, completing a drive to grow the supporters’ section the club strongly worked with Section 8 Chicago on. He played a key role in helping us understand the importance of working with the club to repair damaged relations, exemplified by the Supporters’ Charter signed three years ago.

Peter is now serving (unannounced) as a volunteer on the Fire Anniversary committee, privately giving his free time to help celebrate the club’s past and present in this year, its 15th anniversary.

I spoke to Peter about this snub on Wednesday night, and he brushed it off, reminding me it was all about CJ last night. He won’t be happy that this article is being published, and he seemed more disappointed that Andrew Hauptman wasn’t on the field for CJ’s induction than by his own absence. Yet that’s the very point; by making such a public show of pointedly not inviting a Ring of Fire member present at the stadium to the Ring of Fire induction ceremony, the club made what should have been a night of celebration for CJ one that brought into question what "tradition, honor, passion" really means to the Chicago Fire Soccer Club.

The Supporters’ Charter says that "The Chicago Fire Soccer Club will respect the values of tradition, honor and passion that its supporters have embodied since the club’s founding in 1997." It did not feel like that on Wednesday night.

Postscript: I sent Fire PR questions yesterday regarding whether the entire Ring had been invited, and asking why Peter Wilt was not on the field for the ceremony, in order to give the Club an opportunity to explain their decision-making in this article. I received the below response from Fire owner Andrew Hauptman yesterday evening:

Last night was a special night for C.J. Brown as he quite deservedly was inducted to the Ring of Fire. Today, I was surprised to learn that a few people publicly expressed disappointment because all seven Ring of Fire members weren’t included in the on-field ceremony. To be clear, the only purpose of last night’s event was to honor C.J’s illustrious career and provide him and his family with a memorable night. All inductees were in fact part of the process but all seven Ring of Fire members couldn’t make the game, so the Fire shaped the half-time ceremony solely around C.J. This approach was supported by all involved and seems more than appropriate. The Fire set out to honor C.J. with the integrity and spirit he so deserves, and I don’t believe we fell remotely short on these goals. That said, I do appreciate that some people may have wanted or expected something different. As always, I welcome fan feedback and now that everyone has my email address, I encourage you to continue to share suggestions on how we can improve things on- or off-the-field. In the meantime, let’s get on with some winning, shall we? Go Fire!

I appreciate Andrew taking the time to respond directly. For those who do want to send their feedback, his public Fire email address is ahauptman@chicago-fire.com.

Tom Dunmore is the editor of XI Quarterly and appears as a guest writer for Hot Time In Old Town. He can be contacted on Twitter @pitchinvasion. This article will appear in other outlets. The editorial staff at Hot Time In Old Town agree with the thoughts and concerns expressed in this article.