Share All sharing options for: Post-Match Chalkboard: Running On Fumes

Last week I said that I would write a double post covering the Dallas and Columbus matches. Unfortunately, the Columbus match is too much in the forefront of my mind right now than the Dallas one. I was expecting to get three points out of Columbus, and I'm really bothered that we didn't. I just can't shake it, so I've obsessed over it this past week. The post-mortem after the jump.

The first thing I noticed when I saw the lineups on Saturday was that Frank was basically sending out the same team as he did with Portland and Dallas. The absences of Grazzini and Oduro were the only major changes in the lineup. Robert Warzycha, on the other hand, made a few changes that raised my eyebrows and made me wonder how he has managed his team over this past week as the Crew also had a mid-week match.

Below is a breakdown of the distribution of minutes between Crew players over their matches @San Jose, @Seattle and home against the Fire. The players highlighted in green played the full 270 minutes. The players in yellow played over 200 minutes. The blue cells simply mark where a player received 0 minutes. 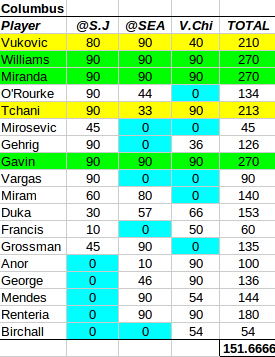 The big things I would take away from the above is that, while 3 players played all 270 minutes, only 2 players surpassed 200 minutes and 18 different players saw time on the pitch. The average time played between them for the week was 152 rounded up.

And here is what Frank put out on the pitch for @Portland, home against Dallas, and @Columbus:

(Note: Corben Bone officially played a minute against Dallas. I didn't include him in this since that's not a significant amount of time on the pitch.) 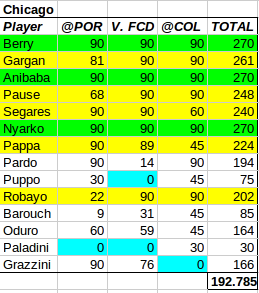 The obvious similarity is that each team had 3 players get to the 270 minute mark. Outside of this, the Fire had five players go over 200 minutes and only 14 players saw action over the stretch of 3 games. That's a lot of soccer in a short span of time.

I think there's only one conclusion that can be drawn from this. This wasn't a mismanagement of the roster, but a lack of faith in the bench. Frank doesn't seem to trust putting anyone else on the pitch, and he rather run the starters ragged. If this is how Frank is going to approach the schedule whenever it gets busy, then maybe getting knocked out of the Open Cup was a blessing in a horrible disguise.

Changes To The Starting XI

As I previously mentioned, the two biggest changes to the lineup on Saturday was the absence of Dominic Oduro and Sebastian Grazzini who were replaced by Federico Puppo and Rafael Robayo, respectively. Let's start with Puppo first.

Frank obviously wanted to rest Oduro, especially since it appeared that Oduro may have tweaked his hamstring in a recent match. Behind Oduro, there's really only two options - Orr Barouch and Federico Puppo. (There's also Kheli Dube, but he seems to have gone missing.) Barouch has shown that he can put in quality minutes as a striker, and he has the size to play alone up top. Why Puppo would get the start over Barouch is a little puzzling to me.

In Puppo's defense, he does seem to have a good instinct of finding space. He's already had a couple of moments where he's made dangerous runs in space and almost created chances. Outside of this, he hasn't proved that he can do much else, and he seems to need to be paired up with some one who can feed him the ball. Sticking him in as the lone forward was foolhardy. When I think of lone forwards, I think of Survivorman - someone who has the skill necessary to find a meal in the most barren conditions. Puppo needs help just to open jars and make toast.

Here's what Puppo accomplished in his 45 minutes: 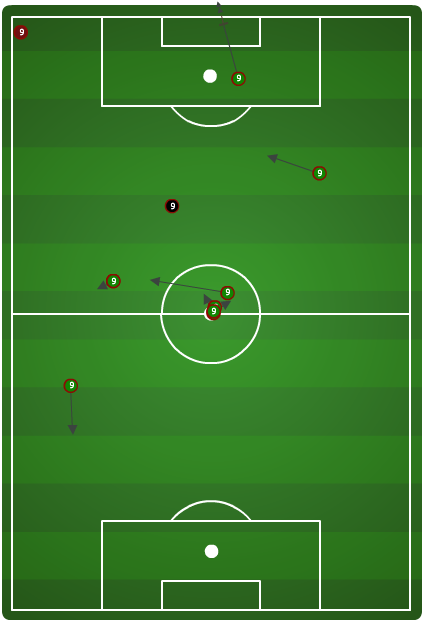 Yes, he did manage a shot. I don't recall it happening, but OPTA doesn't lie. He also completed all 6 of his passes.

Puppo was eventually replaced by Orr Barouch to start the second half: 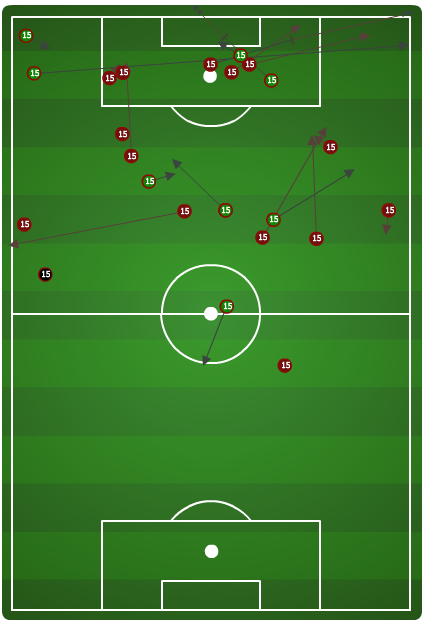 Barouch was much more involved in the game. Yes, Orr did have the benefit of playing with Oduro, but Orr has a history of creating chances on the pitch. Orr's one downfall is that he doesn't always look like the most technically graceful player. He sometimes reminds me of a Great Dane out on the pitch if Great Danes could play soccer.

In the case of Oduro, my guess is that he was only on the bench as security in case things didn't go so well (which they didn't). If things would have gone okay, Oduro probably never plays a minute in Columbus. Oduro had a pretty decent 45 minutes as he helped generate some sorely needed offense in the second half: 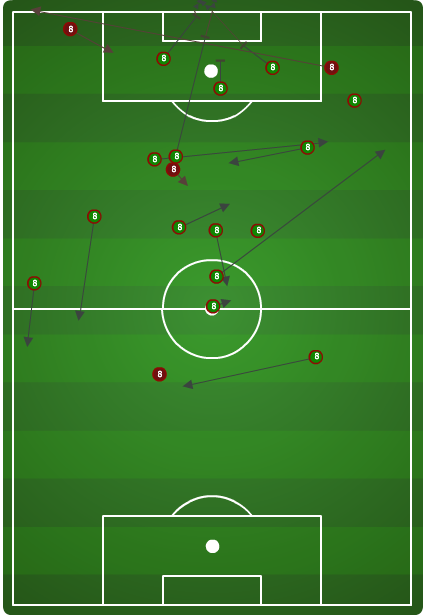 While starting Puppo might have been a bad decision, Frank corrected it by subbing in Oduro and Barouch. I'm sure Puppo will probably continue to get time as a sub, but I would be surprised to see him get another start unless he's paired up with another forward.

Now in the case of Robayo, I was under the impression that he was taking over Grazzini's role as the attacking, central midfielder. Am I wrong in thinking this? Here's Robayo's first 45 minutes on the pitch: 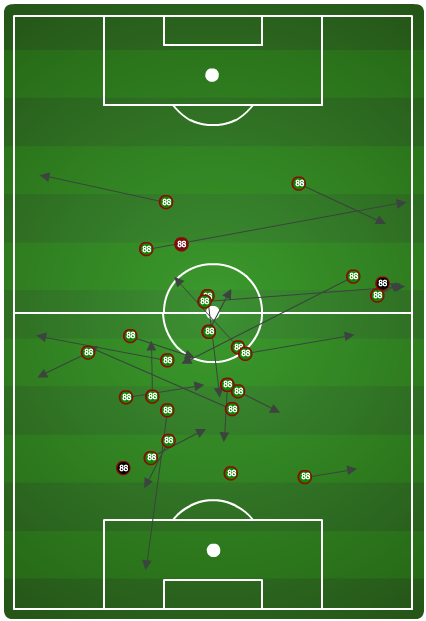 That is a spot-on impersonation of Logan Pause. With impeccably conservative passing, Robayo was a perfect 22 for 22 but only 3 of those passes were forward passes. For comparison, here's what Logan did in 45: 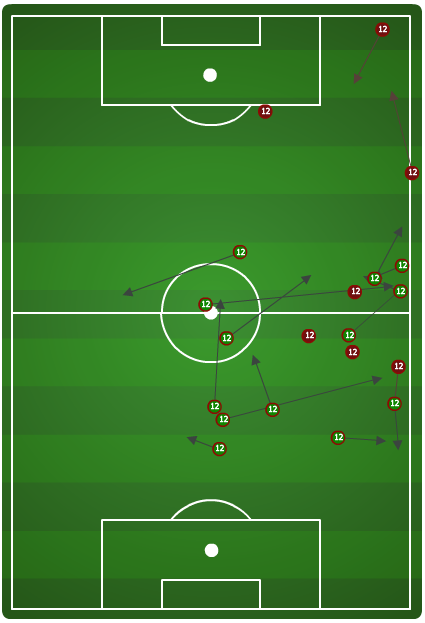 Pause was 13 out of 16 for passing. He actually managed more forward passes than Robayo. If Robayo was taking Grazzini's place in the lineup, he didn't do enough to generate movement up field. When trying to move the ball up field, it's good to take chances to try to create something. Going 22 for 22 on passing is not taking chances, it's playing to not lose the ball.

There was a bit of speculation that Robayo was brought in this off-season just in case Grazzini doesn't resign with the Fire when his contract expires this summer. It's still remains to be seen whether Grazzini will resign, but the signing of Alex Montiero de Lima could be a plan B if things don't work out with Robayo. I think most agree that, after the comments Robayo made a few weeks back about the MLS, things aren't really working out. There's still time for things to turn around, but I don't have a good feeling about it actually happening.

In all fairness to Robayo, he did push further up field in the second half. Frank probably had a word or two with him at halftime: 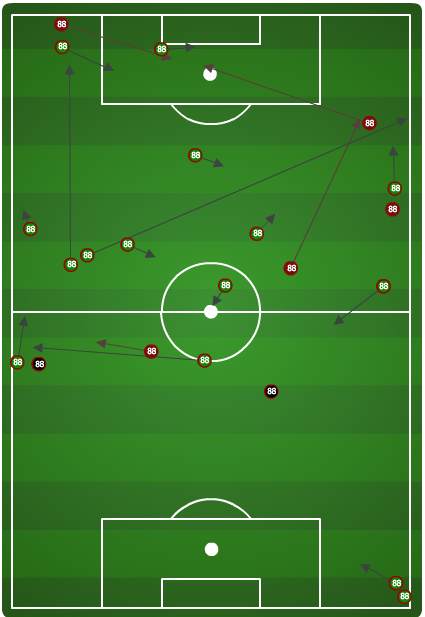 Battling The Crew's Width In The First Half

While Robayo wasn't doing anything to help the team get up field, Dan Gargan and Gonzalo Segares struggled to work the flank for much of the first half. Columbus played with a lot of width and didn't give Gargan or Segares much to work with. Notice how there's a lot of long passes up field and not very many passes originating in the attacking half : 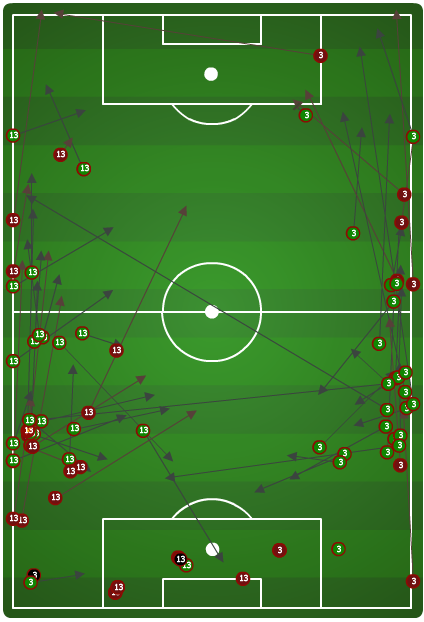 In the second half, things got better for Segares and Gargan. With Robayo moving further up field and the Oduro/Barouch tandem to deal with, Columbus became more compact and couldn't maintain their width: 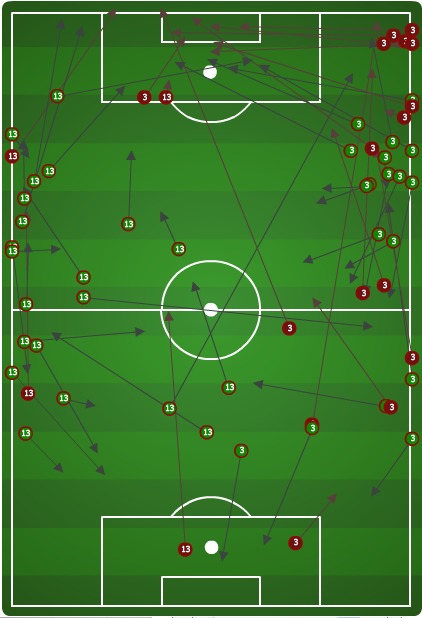 Looking ahead, I am dreading New England next weekend because of their offense. The one saving grace is that New England seems to have more defensive issues than we do, so I expect that the Fire should have a good showing offensively.