Post-Match Chalkboard: Why'd You Have To Go and Make Things so Complicated?

Share All sharing options for: Post-Match Chalkboard: Why'd You Have To Go and Make Things so Complicated?

In a few previous posts from this season, I had written Pappa off. His lackluster performance in the season opener seemed to be a continuation of the 2011 season where Pappa never really seemed to find a rhythm, and his only consistency was his inconsistency. In the following match against Philly, he showed improvement, and since that match, he's been putting in quality minutes for the Fire. I have to admit, he's starting to win me over.

This past week's match out west, Pappa was a consistent contributor to the Fire attack, but his best moment came in the final 20 minutes. So what happened to spark the surge of attack late in the match ? Follow me after the jump. 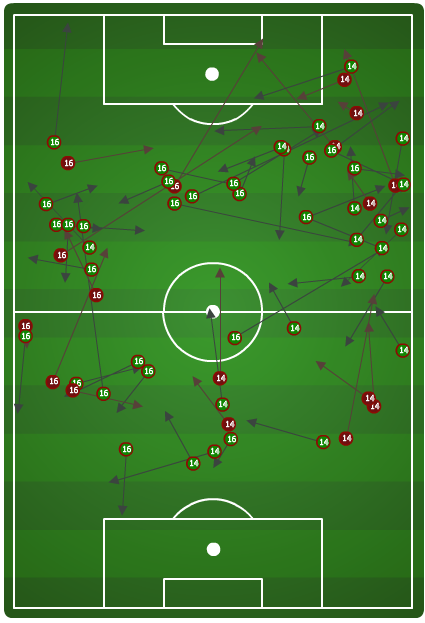 This was a match where the substitutions tipped the outcome of this match. In the 66th minute, Robin Fraser made his first substitution, bringing on Ryan Smith for Miller Bolanos. A few minutes later, Pappa and Nyarko switch sides of the pitch. 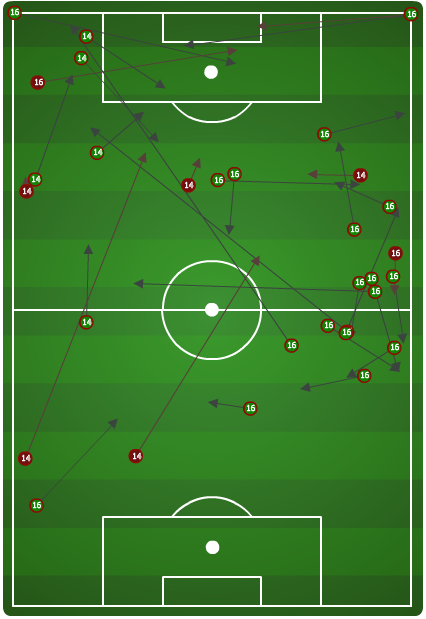 In the first 70 minutes on the left, Pappa had a total of 33 passes completing 26. That's .47 passes per minute. In the final 23 plus, Pappa had 20 passes total completing 17. That's a pass rate of .87 per minute. Just by swapping sides, Pappa doubled his involvement in the offense.

But Pappa switching sides was not the only factor that boosted the Fire's offense. Sebastian Grazzini had fallen off pace around the 60th minute of the match. Up until the 60th minute, Seba had 43 passes (completing 30 of them) for a rate of .71 passes per minute. For the final 18 minutes he was on the pitch, Seba's rate dropped to .38 passes per minute. In the 78th minute, Grazzini was subbed off for Rafael Robayo.

While Robayo did not light it up on the pitch, he did have his best showing in a Fire uniform thus far. In the final 15 minutes of the match (that's including added time) he passed the ball 6 times (completing 4) for a rate of .4 touches per minute. And if I wanted to fudge some numbers, Robayo was officially on the pitch for 12 minutes, which boosts his rate to .5 touches per minute.

Robin Fraser's substitutes in the match were offensive. Unfortunately, none of them added the spark he was looking for. The typically dangerous Ryan Smith had 7 touches in 27 minutes for a rate of .25. Jose Correa, who came on came on as a replacement for Juan Pablo Angel in the 70th minute, had a rate of .17. Finally, Michael Lahoud came on in the 81st minute and had a rate of .75 with only 5 passes.

This win is a small testament to the depth on this team. Along with Robayo coming off the bench, Frederico Puppo put in a good substitute appearance as he recorded his first Major League Soccer assist on the game winning goal. Then there was some guy named Austin Berry who did a pretty snappy fill-in job for Jalil Anibaba.

Let's hope to see Pappa put in another solid performance this Wednesday against Real Salt Lake. A repeat of last year's hat-trick would be nice.