For the past three days, I have been giddy like a school girl. I never once considered that beating Sporting would be a possibility. It was pretty amazing, and it is just a little more proof to show that this team has improved since last season. Last year, I think the Fire would have found a way to concede a goal late and drop the 3 points.

What the Fire did on Friday night was exactly what was needed to get a result. The fact that we got 3 points out of this is just icing on the cake. Unfortunately, defensive performances are not the easiest to write about when it comes to trying to use the OPTA Chalkboard, so I'm going to throw some OPTA stuff out there, and then add some additional non-OPTA opinions.

In my last chalkboard post, I wrote about how many defensive stats the Fire recorded against Columbus. That was nothing compared to this match: 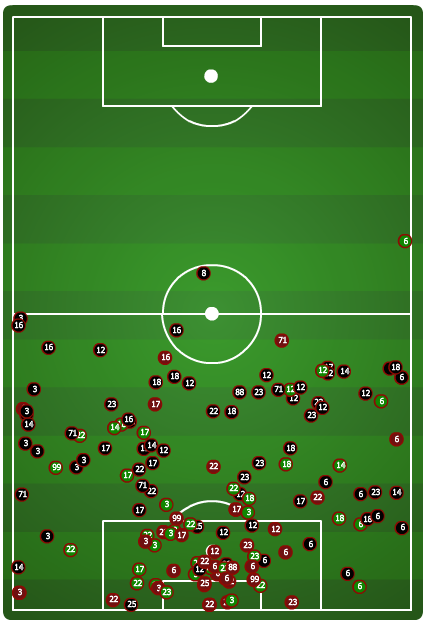 That's a total of 141 defensive statistics*. I'm not sure where the ranks, but it is the most I've ever seen.

When it comes to the midfield, everyone had a pretty quiet game offensively. Only Chris Rolfe and Logan Pause attempted more than 30 passes. Patrick Nyarko had by far his quietest game of the season with only 28 passes attempted, completing 62%*. 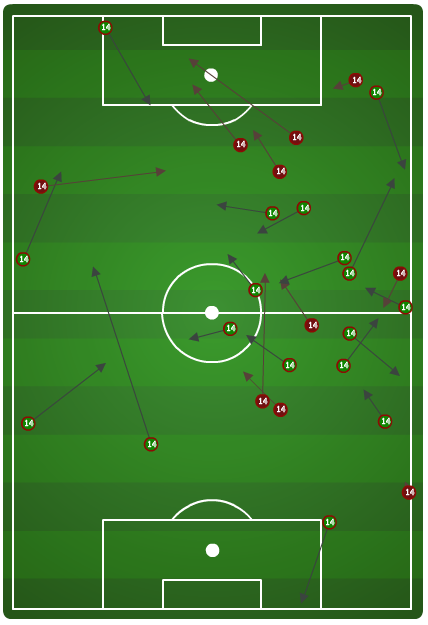 One other statistic worth noting, Sporting out shot Chicago 27 to 10, but Chicago put more shots on frame 5 to 4. According to CincySporting over at The Daily Wiz, this is part of a larger trend.

Chance Meyers was trucking down the pitch to catch up, but he had played so far up that he wasn't able to get back in time to be of any use.

On Friday night, we got our first look at this Alex guy. While what he did was fairly limited, I feel like he showed promise. He also took a nice hard foul within his first couple of minutes being in the match, which might be good introduction to the physical play of this league.

Speaking of acclimation, Rafael Robayo put in another decent performance as a sub. With Pappa's departure seeming all but officially announced (as I write this at least), the Fire will need another midfielder if they plan to keep playing with the same formation. I feel like Robayo has done enough in his limited minutes to warrant one more chance at the starting XI. Mr. Giullermo Rivera stated on Twitter that Robayo is training with the starters today. I would have to say that if Robayo gets a chance to start in Houston (or at home against L.A.) and has a poor performance, his time with the Fire will be all but over.

(Update: It sounds likely that Robayo will be a scratch for Houston)

This conversation is old hat. The only reason I'm bringing this up is because I'm beginning to change my mind about this. Sporting is not as geographically close to Chicago as Columbus is, and they don't have the same history with us as New England does. However, the four matches these two teams have played so far since the re-branding of Kansas City have been more contentious than any match against Columbus and New England during that time.

Some Fire fans scoff at the idea of a rivalry existing because it's been manufactured by the Sporting KC marketing people. If it's not such a big deal, then why are there Fire fans using a #notarivalry hashtag on Twitter? There actually seemed to be more pre-match hate for Sporting KC on Twitter than there usually is for most teams with maybe the exception of Columbus. Let's face it, they piss us off like a rival should.

Others suggest that we need to lose to Sporting KC in order for this to be a rivalry. If so, then why is it that some Fire fans consider the Seattle Sounders a rival? I don't like bringing it up, but we still have yet to beat the Sounders.

While we don't have a long history with with Sporting Kansas City (yet), we do have to play them in Kansas City again this year on September 28th. That's going to be match 30 out of 34, and if things continue as they are, it could be a huge game with playoff indications. On top of that, there is a possibility that these two teams could meet in the playoffs.

And lastly, who wouldn't want to be rivals with this group of good sports:

*=My laptop battery died last while writing this, so I'm recalling these numbers from memory. There is a possibility they might be slightly off.