Post-Match Chalkboard: They Don't Call It San Hoe For Nothing

Share All sharing options for: Post-Match Chalkboard: They Don't Call It San Hoe For Nothing

One of the more insignificant downsides of Saturday's draw, I was a mere seconds away from being able to make a Tony Robbins reference in the headline of this post. I actually saw them preparing the coals for this. They were burning them on a bridge downtown. That's what you get for being stupid enough to listen to Tony Robbins, San Jose.

Now, if Sean Johnson told me to walk across the coals, I'd probably get down and do the worm. Anyways, on to the Chalkboarding fun after the jump!

Play on the Wings

As first Noted By Stephen Piggott over at Chicago-Fire.com, and echoed in both Ryan's preview and Gregg's recap, San Jose loves to have their fullbacks get forward into the attack and send balls in from the wings. And why not? Alan Gordon and Steven Lenhart are two very big targets in the box while Chris Wondolowski is an un-markable ghost.

Here's what San Jose's fullbacks (Justin Morrow on the left and Jed Zayner on the right) did against Chicago on Saturday: 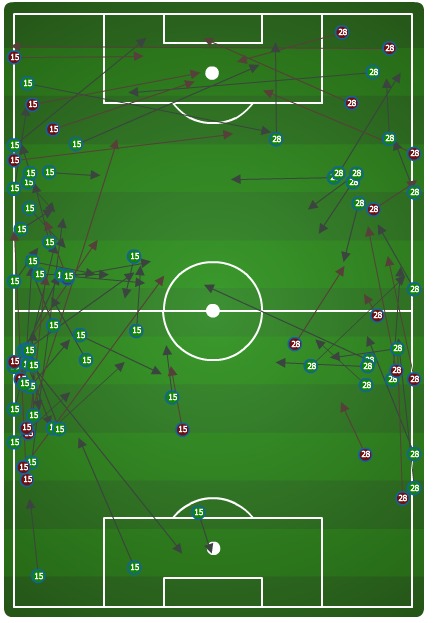 Chicago's fullbacks can get that involved in the attack from time to time, but it's rare. Dan Gargan is usually the most active full back when it comes to attacking. Below is what the Chicago fullbacks (Dan Gargan on the left and Jalil Anibaba on the right) did for sake of comparison: 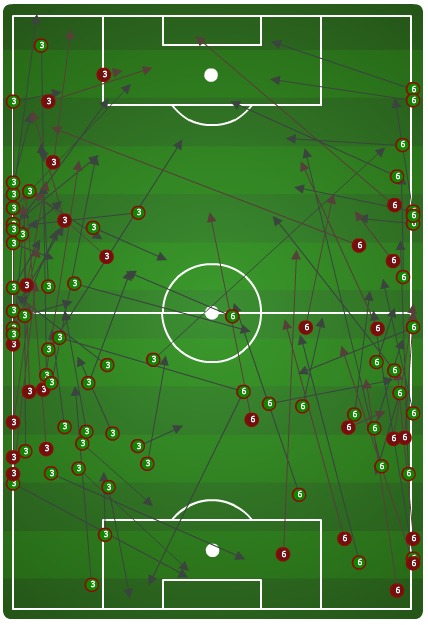 Please note that a lot of those passes are throw-ins, which can't be filtered out separately in the OPTA chalkboard. This especially applies to Gargans side as he is the team throw-in specialist. Also note how Gargan and Anibaba play more to the center of the field. They also cross the ball over to change the point of attack, which is something that San Jose's fullbacks rarely ever do.

The most difficult thing about San Jose, though, is that their fullbacks like to combine with the midfielder's on the wing and make over lapping runs. San Jose's opponents essentially have to deal with 6 midfielder's. Chicago was a bit fortunate to not have to face Marvin Chavez, who is San Jose's most dangerous man on the wing and had Oduro like speed and a ridiculously high work rate. To know how dangerous Chavez is, all you need to do is ask Philadelphia:

That's almost as awesome as what Marco Pappa did to Philly this year. I didn't see any reason why Chavez was not on the game day roster, but I also didn't really care as long as he wasn't on the field.

The obvious danger man out of the midfield during this match was Simon Dawkins. He had a number of shots that should have been goals. Most notably a volley from the back post in the first half. 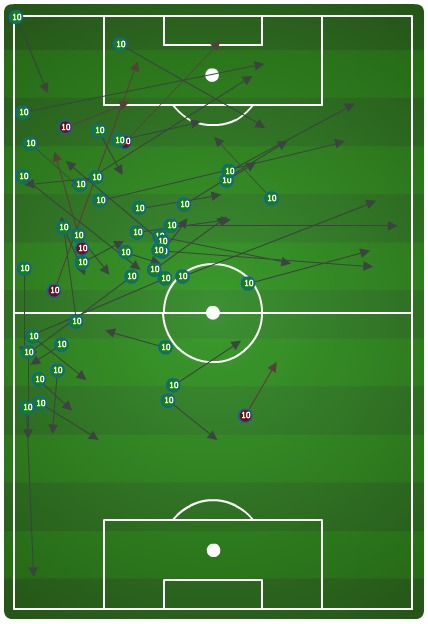 While Dawkins was the obvious danger man because of his multiple attempts on goal, Shea Salinas was probably more dangerous throughout the match. After all, it was Salinas who found Jed Zayner on the flank to get Dawkins his shot at the back post. Salinas was a terror on the right side of the field. He's very quick and one of his favorite moves is to fake moving up field before cutting inside. I've seen him do this a few times this year, and he does it well. This move usually gets defenders momentum moving in one direction, making it hard for them to adjust to his cut inside. Dan Gargan fell victim to this move and forced him into fouling Salinas and getting shown a yellow card late into the second half.

Here is a look at how busy Shea was on Saturday night: 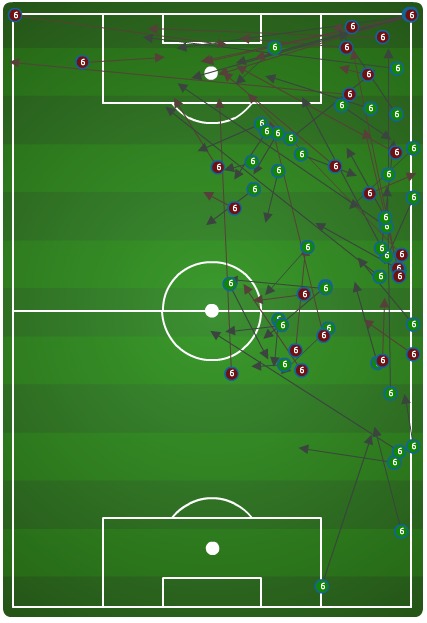 There was also a fairly different style when it comes to the centerbacks of each team. Arne and Austin are fortress daring attackers to breach them. They spend a lot of time lying deep and defending close to the net, usually waiting for the attacking player to make the first move.

Victor Bernardez and Jason Hernandez, on the other hand, roam more freely away from the net and pressure attacking players more aggressively. Patrick Nyarko got a good dose of that style of play in the first half where Bernardez challenged him and chased him away from the penalty box before bulldozing him near the touchline.

Here are the defensive points recorded by Bernardez and Hernandez: 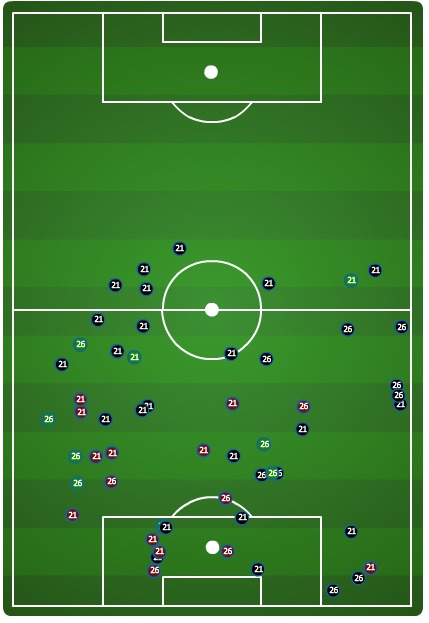 Her are the defensive points recorded by Friedrich and Berry: 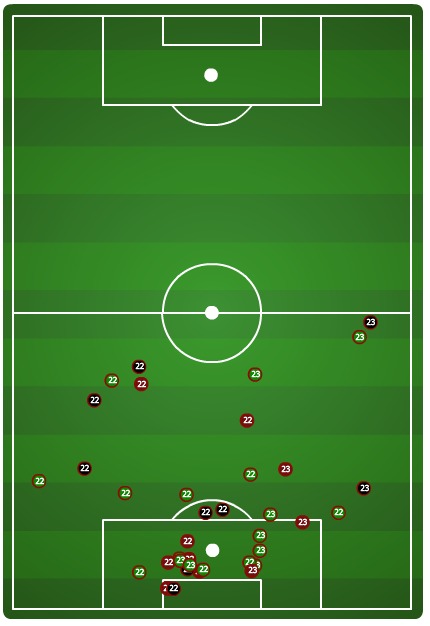 Alex to the Left

Alex, for some reason or another, tends to favor going to his left. At this moment as I write this, I can't recall whether Alex is left footed or right footed. Maybe that plays a part in it? Who knows. Here's a look at his past two performances. 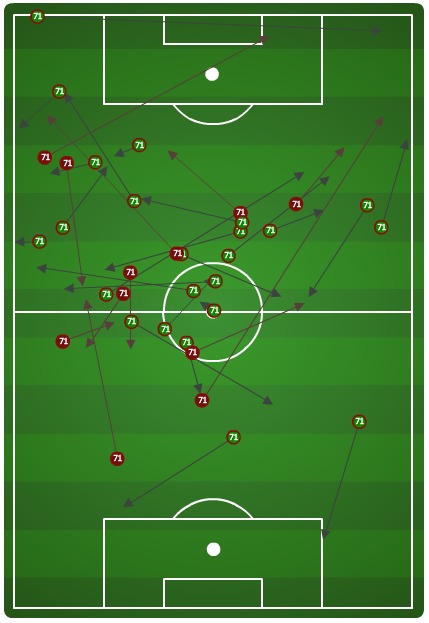 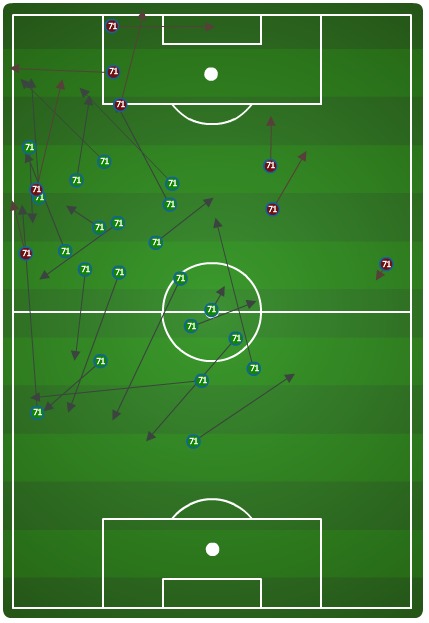 Alex also displayed this tendency during his limited minutes in Houston and New York earlier this season.

Alex is looking more comfortable with each match. Hopefully, he'll continue to improve over the next couple of matches and turn into a real force to be reckoned with. He has a sneaky-ness about him that I like. His shot from distance in the 25th minute probably would have caught many keepers not named John Busch off guard.

The one knock I have on Alex so far is that he needs to make quicker decisions. There was a point in the first half where Alex had the ball towards the left side of the pitch on a breakaway. Oduro was in the center lane holding his run, waiting for Alex to spring him. It was a precarious situation. If Alex puts the ball to far ahead of Oduro, Busch might be able to come out and get it. If Alex tries to put the ball closer to Oduro, one of the defenders marking him might get it. Unfortunately, Alex didn't act, and the window of opportunity closed. If he could have recognized that situation earlier and not hesitated, there is a chance that he could have put the ball out for Oduro to run on to it and Busch wouldn't have had a chance to get it.

Because it's a crime that a performance like that doesn't earn a team 3 points. 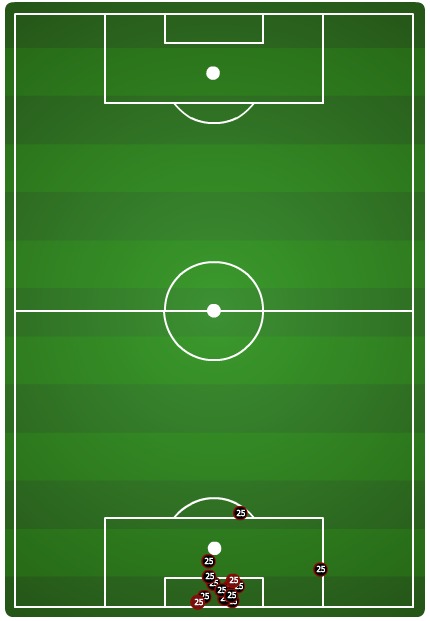 Chris Penso was terrible. He was terrible not just for the extra time controversy, but by how inconsistently he called the entire game along with all of the calls he missed. The biggest missed call was Jalil Anibaba's hand ball in extra time. I doubt Anibaba's handball was intentional, but he's got to keep his arms into his body.

The thing is, if Chris Penso gets that call right, and the Earthquakes have a penalty kick, I like our chances with Sean Johnson in net. He has saved 2 of the 3 PK's he's faced this season, and he has the highest save percentage of any keeper who has played more than 15 games this season with 78%. Sean Johnson stopping a PK from Chris Wondolowski would have been one hell of a way to cap a win on the road.