Sunday was a great win by the Fire as the squad garnered 3 important points on the road. As per usual, the Fire got the job done after going down a goal early. The Fire have come back so many times this year, that I'm starting to get a little complacent with conceding early goals. Hopefully the player don't start feeling the same.

With this last match, we saw Sherjill MacDonald wreak havoc, Rolfe catch fire and Logan Pause go down with an injury. At look at these elements after the jump!

Sherjill MacDonald was a terror to Philly defenders on Sunday. There were a number of times where he forced defenders to pass back to the keeper because he was closing down on them too quickly. Sherjill even forced an awkward back pass that almost got him into a 1-on-1 with Zac MacMath. Also, it was fun to watch him knock over Sheanon Wiliams over just outside the penalty box in the first half.

Sherjill was all over the pitch on Sunday, which is a nice change of pace. Just to illustrate, here is everything that OPTA recorded of Sherjill against Philly: 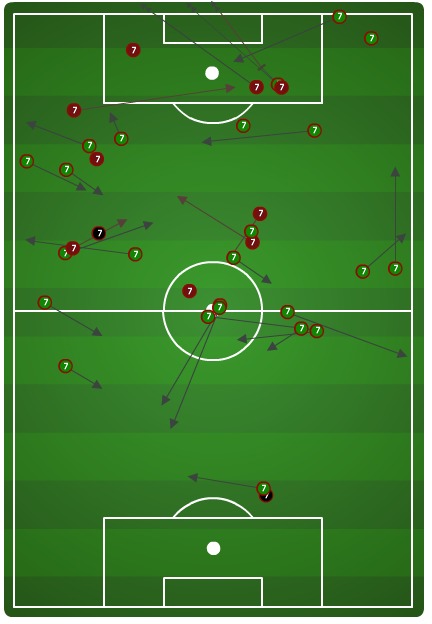 He was essentially getting involved in everything, and looking at the timeline, he seemed to grow stronger as the game wore on: 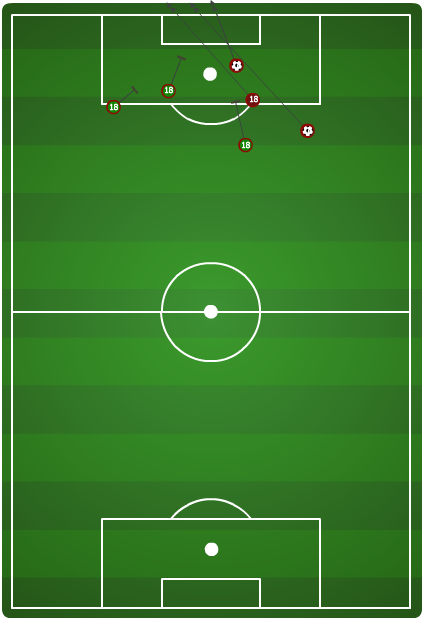 6 shots and 2 goals (and very close to a hat-trick) is a Man of the Match performance. However, outside of those two goals, Rolfe had a fairly mediocre day in the midfield. A lot of the good stuff that we saw from him on Sunday was in the second half on counter attacks when the Union had a lot of players committed forward. Right now, Rolfe playing in the attacking midfield role is not exactly the most ideal situation for the Fire. Rolfe's first goal on Sunday is a prime example of why we need playing him up top rather than in the midfield.

As you all have probably heard by now, Logan Pause is out 4-6 weeks with a pair of broken ribs. The fact that he continued to play another 20 minutes is pretty bad ass. I don't think anyone on the Fire squad can really complain about an injury when the captain does something like that. You can't play because you picked up a "knock" in the last match? Go ask Logan what he thinks about knocks.

James had a write up earlier today regarding the absence of Pause and what options the Fire have.So I'd like to throw my two cents on what are the Fire going to do for the next 4-6 weeks without Logan. There are quiet a few fans who really want to see a 4-4-2 and have Rolfe paired up with MacDonald. As much as I would like to see this pairing up top, I am against experimenting with the formation this late into the season.

As boring as playing a 4-2-3-1 can be at times, it has won us a lot of games and the players are familiar with it. If the team changed formation, there will be a bit of a learning curve that could be detrimental to Fire's playoff chances. Every point from here on out is going to be extremely important. One of the biggest knocks against the 4-2-3-1 is that the Fire haven't been very good offensively. Formations are inherently neutral. Changing formation is not going to suddenly guarantee a downpour of goal scoring. Formations are more defined by the pieces, and with the addition of Sherjill, the Fire are in a much better position than they were earlier in the year.

As it stands, the Fire don't have the pieces to effectively run a 4-4-2. If Rolfe goes up top with MacDonald, then Alex will be next in line to fill Rolfe's vacancy in the midfield. Alex has looked pretty good at times this year, but I'm not confident in his ability to pull the strings from the midfield. Additionally, Pardo would be the only holding midfielder on the pitch. Both Pardo and Pause have been solid this year, and with only Pardo lining up, it is going to put more pressure on the back line. Austin Berry has had a great rookie campaign, but some of his success has to be credited to the Pause/Pardo tandem that he has been behind all season. Running a 4-4-2 will weaken our midfield and could lead to some rookie center back mistakes.

The real choice that Klopas should be making on Saturday is to make is who he will replace Logan Pause with. Does he put in the best available player (Patrick Nyarko, if Alvaro Fernandez starts again)? Or does he go with the best fit to play holding midfielder (Daniel Paladini, in my opinion)? If I was in Klopas's shoes, I'd go with Paladini.

If anyone out there has any other thoughts, please feel free to leave a comment below.