The Chicago Fire's 2-1 victory over Toronto FC on Saturday was not a comfortable one. While Toronto has been on the upswing, this should have been a game that was easily won. Marco Pappa's equalizer was a huge relief. Between the last recorded shot of the first half (in the 38th minute) and Pappa's goal (in the 64th minute), the Fire managed to record only two shots. In the span of those 26 minutes, coming away with any points at all seemed bleak. Seeing the team get the equalizer and then go for all three points as confidently as they did was truly great to see.

After nearly stealing 3 points in San Jose last week and a comeback against an improved Toronto side this week, the eastern Conference better take notice. Despite the lack of goal scoring since Sebastian Grazzini's departure, this team is still playing well even with a few tweaks to the lineup. This is a team that can go toe-to-toe with anyone in the league.

A look at a few elements from Saturday's game after the jump.

Chicago dominated possession in this game by a wide margin of 66% to 34%. This stat wasn't padded by Toronto being down to only 9 men in the final minutes. Chicago actually had 66% of the possession going into halftime. The first 16 minutes of the match, before the unfortunate mistake that gave Toronto the lead, was one of the best stretches of ball possession and movement the team has displayed this season. By the time Toronto had scored their lone goal, the Fire had already attempted 123 passes to Toronto's 45. 73% of those first 16 minutes were all Chicago Fire. 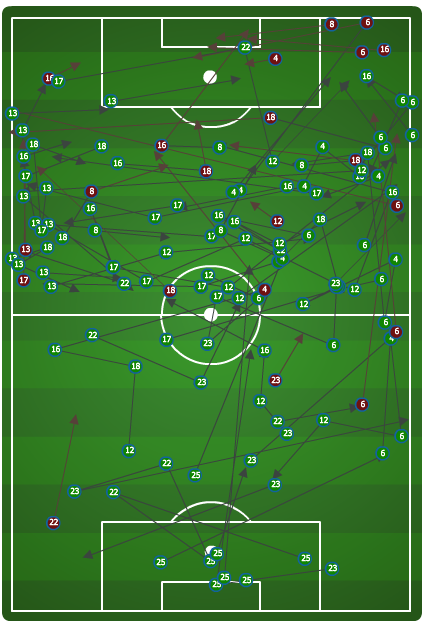 One of the keys to this early run of play was newly acquired Alvaro Fernandez. He definitely has a great sense of where to make runs and where to put balls. He's a great pick up to add depth to our midfield, especially with the inevitable departure of Marco Pappa. It was also goo to give Nyarko a bit of a break considering the beating he took against San Jose.

With Oduro being subbed off at halftime for MacDonald, we got a nice 50/50 look at these two strikers. Here is what Oduro accomplished in the first half: 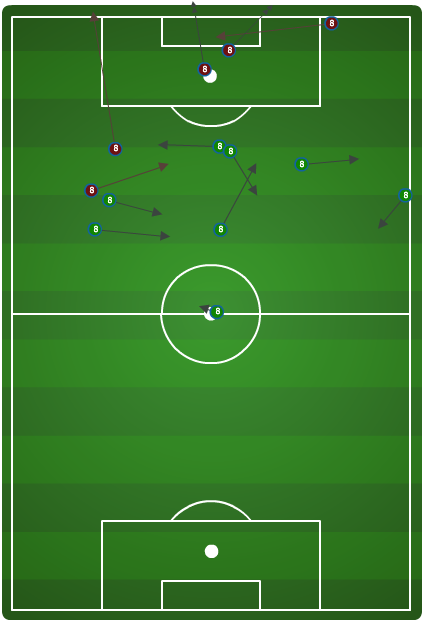 That's a total of 11 touches and 2 shots for a rate of one touch for every 3.4 minutes for Oduro.

Here is what MacDonald did in the second half: 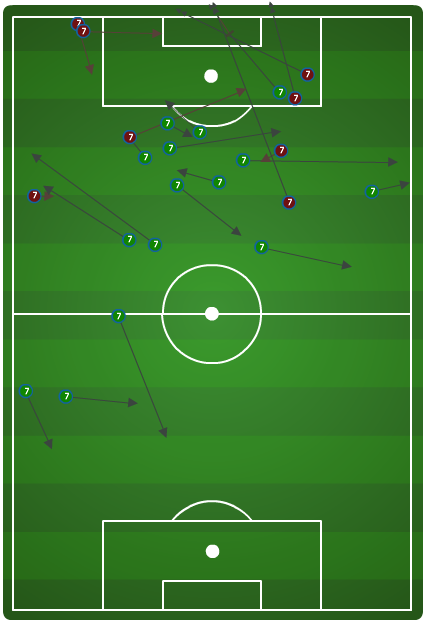 That's 19 touches and 4 shots for a rate of one touch every 1.9 minutes for MacDonald.

Now, while MacDonald did have the advantage of playing a short handed Toronto side, he also had a noticeable impact on the game form the moment he came in. Oduro's time as a regular starter on this team is over with once Sherjill is fit enough to at least put in 60 minutes, which could possibly be next week.

The biggest reason I think this move is going to happened is not so much due to what Sherjill has done in his 71 minutes on the pitch, but because of Oduro hasn't done. A couple of my collegues here at HTIOT have mentioned that Oduro looks tired. I have to respectfully disagree with this. Pavel Pardo has put in more minutes than any other player on the Fire squad this season and has put in 249 more minutes than Oduro. Oduro just can't finish. This was something he was labelled with long before he arrived in Chicago, and as great as his 2011 was, he still left a number of missed chances on the field.

It's sad because Oduro puts himself in great spots. He knows where to be on the field to get chances and he's also able to create chances with his speed. He gets or creates at least 1 or 2 really good opportunities at goal each game, and if he finished at least a quarter of those chances, he'd be a super star in this league.

Centerbacks and the Attack

During the post-game broadcast, Evan Whitfield and Dan Kelly interviewed Austin Berry. During the interview they mentioned that both him and Arne Friedrich were getting very involved in the attack and asked if this was planned or if it was just how the game played out. Austin responded that it was something that was dictated by the game.

Other than Arne's box to box gallop late in the second half, I hadn't really noticed that Arne and Berry were playing a more attacking like role than usual, so I decided to look at the past 10 games to see if anything was different this past game. I did find that Austin was pushing further up the field more than usual, which may be a good sign that he's developing more confidence in his role.

From what I found, Anibaba and Berry tend to stay deeper in the defensive third and distribute the ball from there. This is probably because they're still gaining experience and confidence on the field. Friedrich, on the other hand, likes to get forward across midfield frequently when the flow of the game allows it.

Here's an example of Berry and Anibaba against Houston back on July 3rd: 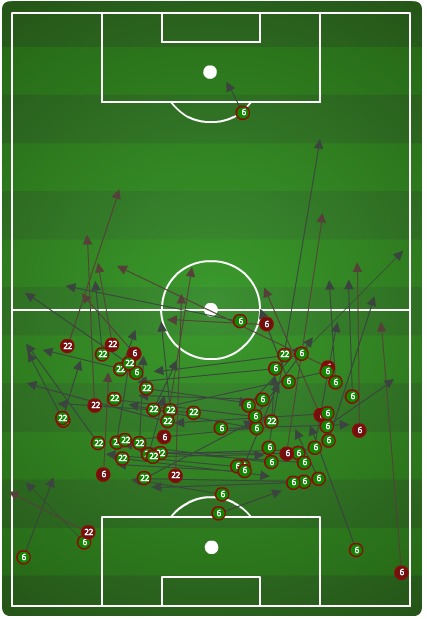 Both Anibaba and Berry don't really go past the midfield line, and a quite a few of their passes are two-touch passes along the back to rotate the ball.

Here is an example of Berry and Friedrich against Vancouver on July 14th: 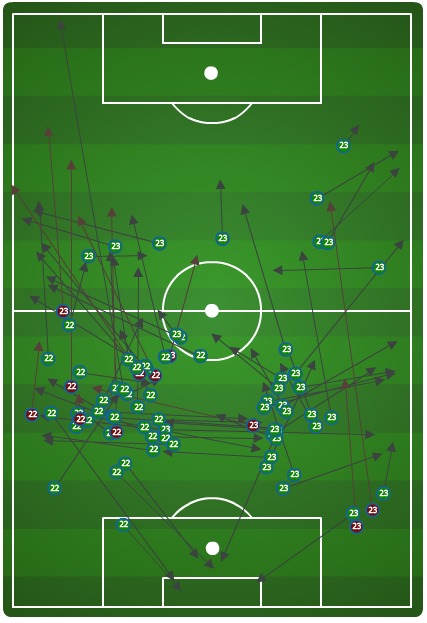 Friedrich is doing a lot of work beyond the midfield line. As I mentioned earlier, he only gets forward if the game allows it. In the match at Kansas City earlier this year, Friedrich hung back as did most of the team. San Jose is also another example were Friedrich played a little more conservatively. In all of these instances, Berry stayed back just like he does when playing with Anibaba.

However, here is what Berry and Friedrich did on Saturday: 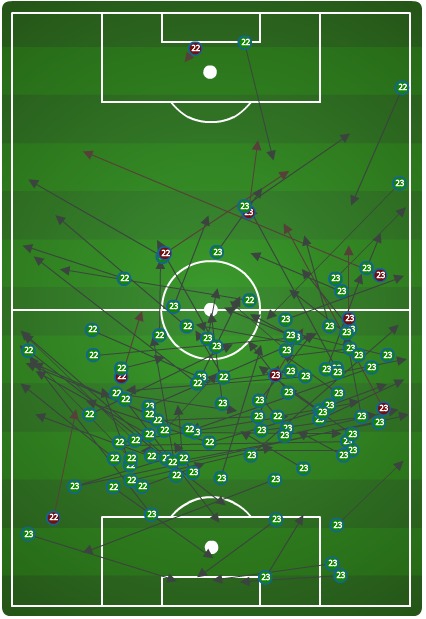 It's not much, but it is still encouraging to see Berry recognize that he could move further up field against Toronto. One thing that I did take away from the San Jose match is that San Jose's centerbacks, Victor Bernardez and Jason Hernandez, spent a lot of time just past midfield. It was like watching a volleyball match at times. Balls would get cleared out of the Fire's own half only to be knocked back in by either Hernandez or Bernardez. This kept quite a bit of pressure on the Fire as it made counter attacking difficult. Of course, one mistake and some one like Logan Pause will get a breakaway 1-on-1 with your keeper.