With Saturday's 3-1 victory over the Impact de Montreal, the Chicago Fire have gone 5-0-1 against Canadian (or Canadien) teams this season. While the victory against Montreal was fairly comfortable, things got a little too close in Toronto. A look at Toronto's push for a draw, Alex's performance on Saturday and Chicago Fire ball-hawking after the jump.

Wednesday's match was just that. This match was just the second match this season where the Fire held a 2-0 lead. The first of these was against Houston just two weeks ago. There is a pretty stark contrast between these two matches. The Houston match was against a top opponent in the Eastern Conference and was played just days after the 4-2 fiasco in DC. While Houston did cut the lead 2-1 late with a hard fought, ugly goal, the Fire defense was tight and played Houston tough. The Toronto match was against the worst team in the league and played after a 10 day break. The Fire got too comfortable with their lead and came very close to dropping the win.

Before Toronto cut the lead in half, the Fire had a slight lead in the possession battle by a margin of 51% to 49%. For the final 12 minutes, however, the two tams swapped roles with Toronto holding 51% of the possession. The one biggest reasons for this is because the Fire went from completing 79% of their passes down to 68% over those final minutes. In the final 12 minutes, Toronto owned the center of the pitch. Here's how Toronto moved the ball in those waning minutes: 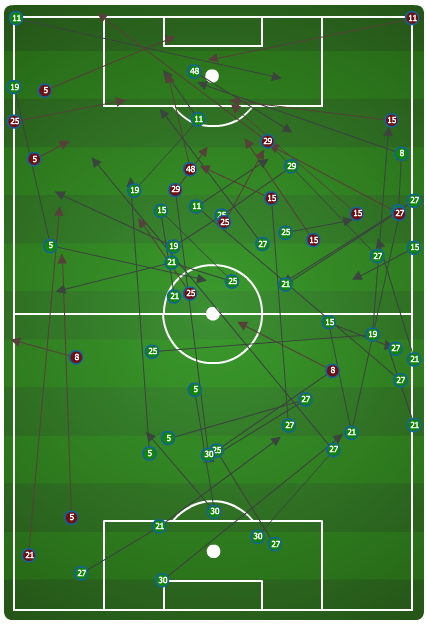 In the final 12 minutes, the Fire avoided the center of the pitch as much as possible and tried to hold on to the ball: 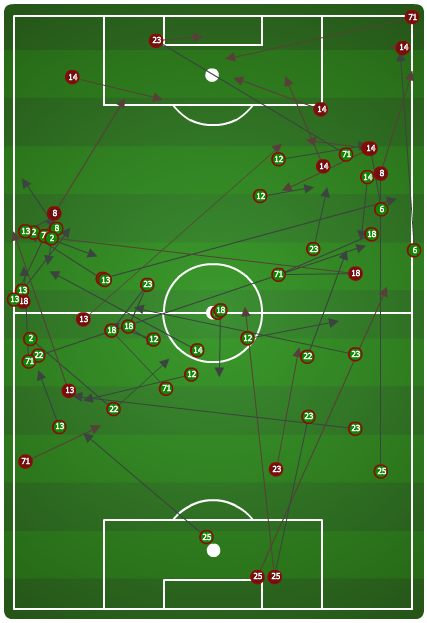 Eric Hassli's goal was Toronto's first shot in the span of nearly 25 minutes. Toronto would then get 4 shots off in the final few minutes. Luckily, disaster was avoided as none of them found their way past Sean Johnson.

Up To Task Against Montreal

The most interesting thing to see during this match was the absence of Pavel Pardo. This was the first match all season where Pardo did not start. Alex was Pardo's replacement into the lineup, and definitely had a different energy to playing the position. Pardo's movement on the pitch is almost always based on anticipation based off of years of experience. During games, Pardo is almost never chasing the play, but putting himself in position for what he thinks is going to happen next. Alex has youth and speed. He can afford to chase and be a bit more aggressive and pressure opponents. For most of the match, it almost seemed like the Fire were playing a 4-1-4-1 for much of the first half.

An example of Alex's aggressiveness came in the 20th minute. Alex was pressing Nelson Rivas up in the attacking half of the pitch. Nelson launched the ball to Hassoun Camara on the right flank. Logan Pause was the center of the pitch near Marco Di Vaio, but ran towards Camara as the ball was played to him. This left Di Vaio in large space suddenly unmarked and he ran the gap between Arne Friedrich and Austin Berry. We all know what happened next. Here's the replay:

Marco Do Viao's goal was partly due to an amazing individual effort by Di Viao to turn Friedrich around and create the shot, but it was also partly due to Pardo's absence. Pause, Berry and Friedrich have all grown dependent on having the extra security of a second defensive midfielder to fill in those gaps. With Alex pressed so far up field, Pause didn't have someone to cover him as he pressed Camara. Frank must have had a talk with Pause and Alex after the first half regarding what they were doing on the pitch, as their play changed in the second half.

Here is Pause's first half passing and defending: 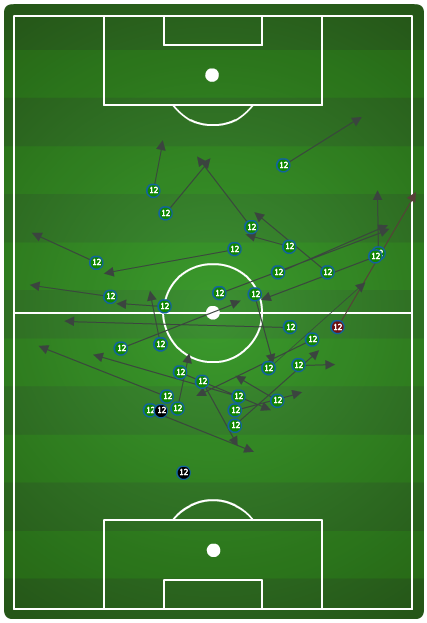 Then for the entire second half, Pause hardly left the sight of Jalil Anibaba and Austin Berry: 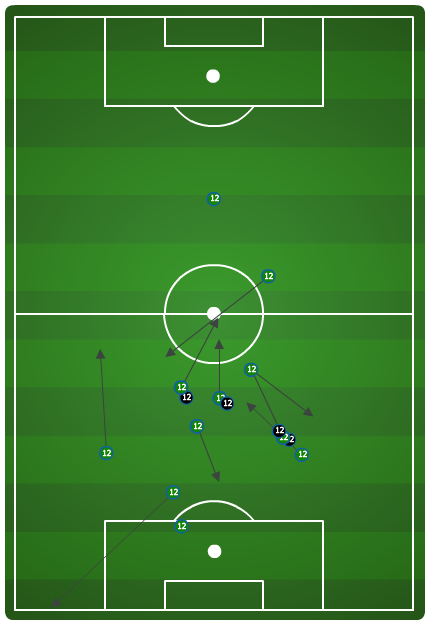 Alex spent most of the 1st half high up the pitch: 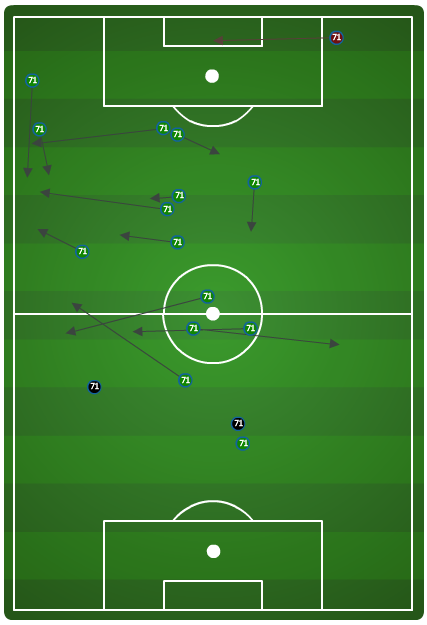 After halftime, Alex reeled it in a little bit and didn't spend as much time in the attacking half: 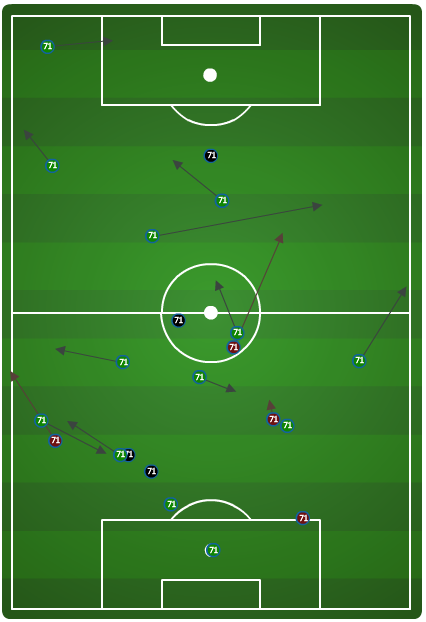 In the 61st minute, Alex showed his aggressiveness again by pressing further up the pitch and creating a turnover. Of course, we all know how this one ended:

Seeing Alex score this goal suddenly made me realize a trend developing. Over the last 3 games, Chicago has scored 8 goals. 4 of those 8 goals have come off of turnovers from midfielders pressuring in the attacking half of the pitch and forcing turnovers. It happened on the Nyarko and Paladini goals against Houston, and it happened on the Fernandez goal in Toronto. Patrick Nyarko set up Sherjill MacDonald to almost make it 5.

Here is how far up the midfield was defending against Houston, a match where Chicago spent most hunkering down against a Houston Dynamo team trying to claw it's way to a draw: 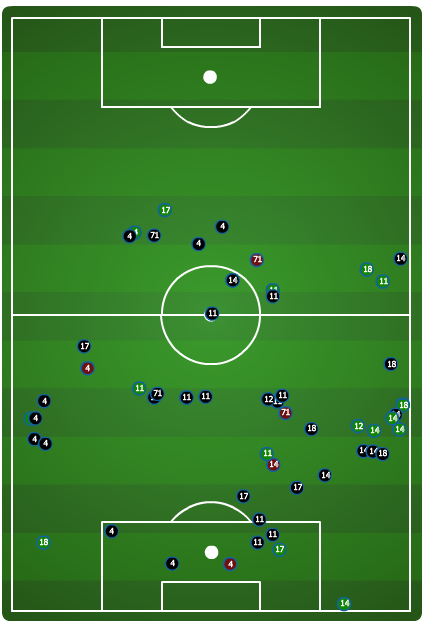 Here is how far up the midfield was defending against a pretty toothless Toronto side: 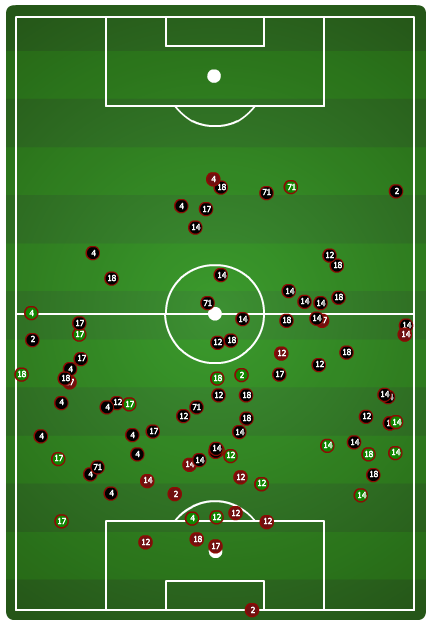 And here is how far up the midfield was defending against Montreal: 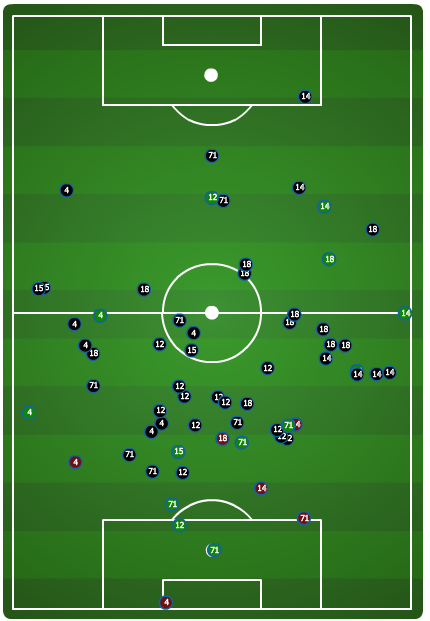 The Fire have been very opportunistic as of late in scoring goals. Alex's blast from distance against Houston originated off a turnover that Anibaba created and then immediately bombed up field to Dominic Oduro. Not every turnover turns into a quick breakaway. Fernadez's goal against Montreal came from a turnover that turned into a nice, gentle 9 pass build up:

Hopefully the Fire can pressure Columbus in to a mistake or two on Saturday and put a couple into the back of the net.