Share All sharing options for: Chi-Town Breakdown: The First Goal

It's the 33rd minute. And things aren't going well for your Chicago Fire. The Montreal Impact are up 1 on a goal by Italian Marco Di Viao. The Men in Red have played a flat half an hour thus far, and a goal at this point seemed like a pipe dream. When Chris Rolfe cut through the middle and passed the ball to Jalil Anibaba, we all figured he'd waste the cross like he had before. But he passed to Logan Pause and confused us all. Has he lost confidence? Did he not want the responsibility of trying to create a goal scoring opportunity? It turns out that the exact opposite was the case, and his back pass started a chain reaction leading to the tying goal. Join me after the jump, where I show you (with badly telestrated images!) why, and how they scored.

Before we start, a bit of a key:

The light blue in Figure 3 is an offside line.

Right, lets get to it. 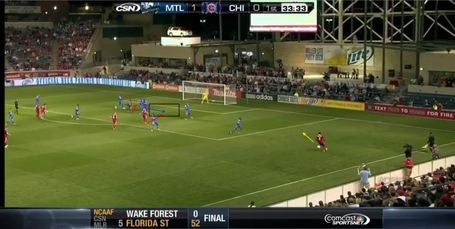 When Jalil Anibaba gets the ball from Chris Rolfe on the wing, the defense was covered well in order to defend an incoming cross. The Montreal left back was running into position to block or alter the cross. The Fire players were in no position to make a strong run into the space, as you can tell by the body position. Also, a cross on the far post would be stopped by the goalkeeper; unless a Petr Cech Euro 2008 moment happened. So, he decided on a back pass to Logan Pause. 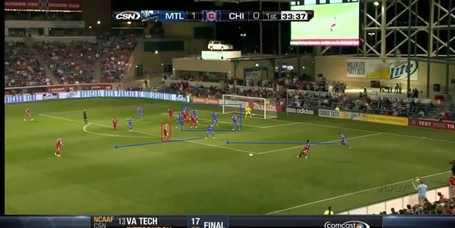 Here's what the pitch looked like immediately after the pass was played back. As the blue box shows, the defense tightened to block an incoming cross. Chris Rolfe may very well have been an option, but look at the Montreal defender at the top of the box, and how close he is to Rolfe. An errant pass would be pounced on and the Impact would have been on the counter. The pass to Logan also creates an interesting problem for the defense. As both defensive players on the left go to close out the ball and Chris Rolfe- the goal scoring threat, this leaves Jalil Anibaba open to receive the pass back. 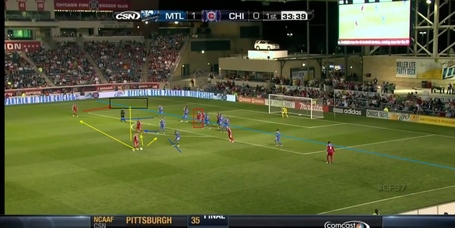 As you see in figure 3, Pause had other options. He could have passed it on to his left, as there's no one around him. However, this would have created the same problems as the first pass to Jalil. The same could be said for the space to the corner. A chip over the top wouldn't work because Sherjill MacDonald is offside. So the pass goes back to Jalil. 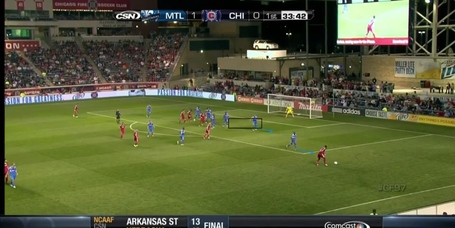 The pass back to Jalil creates the window for the cross; as both Montreal players on the left of the defense close out. This is the smart defensive play, because they know Anibabba has dribiling skills and can get around the first defender. However, behind those two, Montreal's defensive positional superiority is deteriorating quickly. No one makes the move to cover the closeout defender. And that leaves MacDonald with the opportunity to cut into the space quickly and head the goal home, as demonstrated in figure 5. 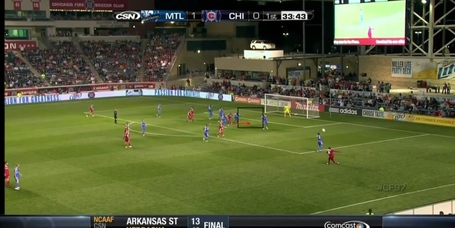 This goal was scored because of the decision making of Jalil Anibabba and Logan Pause. And It's how they were able to salvage dignity going in to the half.