Dan Gargan's benching in favor of Jalil Anibaba at the right back position has been a point of contention for many Fire fans. Gargan is a fan favorite due to his gritty style of play and his strong work rate. Most Fire fans argue that Anibaba is not a good fit at right back because his natural playing position is center back. Fire fans also see Anibaba as indecisive, out of his element and not very good with the ball at his feet.

Share All sharing options for: Paint By Numbers: Gargan v. Anibaba Debate from an OPTA Perspective

Dan Gargan's benching in favor of Jalil Anibaba at the right back position has been a point of contention for many Fire fans. Gargan is a fan favorite due to his gritty style of play and his strong work rate. Most Fire fans argue that Anibaba is not a good fit at right back because his natural playing position is center back. Fire fans also see Anibaba as indecisive, out of his element and not very good with the ball at his feet.

If Anibaba is a step down from Gargan like people think, then why does Frank Klopas continue to plug him into the starting lineup? To get a more impartial point of view, I decided to collect data from the OPTA Chalkboards to see if I could come up with an explanation as to why Klopas has been sticking with this change in the lineup.

To my knowledge, Gargan has not struggled with any major injuries this season, so when it comes down to it, there are only two reasons at this juncture as to why Frank Klopas is playing Anibaba over Gargan: 1) Frank thinks Anibaba is the better choice at right back than Gargan or 2) Gargan has done something to lose his starting job at right back.

I have gone through each game this season, totaled up Gargan and Anibaba's time only while they were playing right back and recorded certain statistics that seemed pertinent to the position. All of the rates on the tables below are per 90 minutes. In total, Gargan has played a little over 15 games at right back and Anibaba has put in a little over 11. In the tables below, I created a column for the differential between Anibaba and Garan and colored it to show which person has the higher rate for that statistic.

For starters, let's go with offense:

Offensively, Gargan has the edge over Anibaba. He doesn't loose possession as often, has a higher pass completion percentage and completes more crosses. One of the biggest knocks against Anibaba is his crossing ability, however, he does attempt crosses nearly a third more often than Gargan. My guess is that having Sherjill MacDonald on the team has impacted this as the Chicago Fire have not started both Gargan and MacDonald in a lineup. Matter of fact, Gargan and MacDonald have only been on the pitch together for a total of 62 minutes this season.

Offense and defense are not equals for full backs. The offensive game is important, but it is secondary to defense. Here is a look at Gargan and Anibaba's defensive statistics:

Here is where Anibaba looks to have a leg up on Gargan. While Gargan wins more tackles than Anibaba, loses fewer tackles, and blocks more crosses, he is behind Anibaba in most every other category. The biggest categories are fouls conceded and yellow cards. 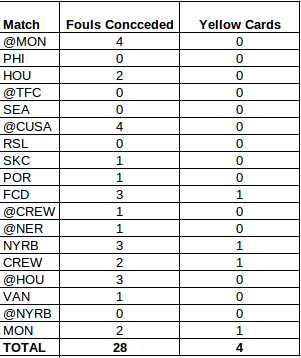 Gargan didn't start off the season too bad. He only conceded 10 fouls in his first 7 matches at right back. He then conceded 15 fouls and received 3 yellow cards over the next 8 matches before he was first replaced by Anibaba in the match against the LA Galaxy. Fouls will happen when you're a defender, but frequently fouling is more than just accidental contact. If a player commits multiple fouls consecutively over the span of a few matches (read: 8 fouls and 2 yellow cards in 3 matches), then the player is getting beat. Fouls also give opponents set piece piece opportunities, which makes a foul-prone player a liability.

The yellow card against the Columbus Crew on June 23rd put Gargan two yellow cards away from suspension. The following match in Kansas City, Gargan played left back and Anibaba took over at right back as Gonzalo Segares was suspended. Gargan conceded 3 fouls in pretty dangerous areas against Sporting KC, but it's a little forgivable since he was playing left back. Anibaba, meanwhile, didn't do anything amazing against Sporting KC, and for the next match against Houston, Gargan found himself back in his usual position. Against Houston, Gargan conceded 3 more fouls: 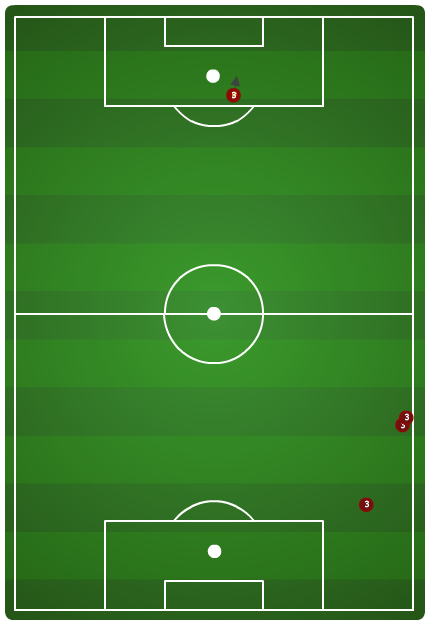 As shown above, there are four fouls marked. The highest one is an off-side call. The three other lower fouls are all in dangerous spots. Two of these fouls happened pretty late into the match. The foul closest to the penalty box happened in the 86th minute. This, compounded by the fact that Gargan was still on suspension watch, may have been what caused Frank to start Anibaba over Gargan in the following match against the LA Galaxy. In this match, Anibaba had a fairly good showing on the offensive side of things, but was not anything special defensively.

During the next match against the Vancouver Whitecaps, Arne Friedrich received a red card mid-way through the second half. Gargan was subbed on to take over at right back as Anibaba switched over to center back. Within a minute of being on the pitch, Gargan had to foul again. After that moment though, Gargan tightened things up and did not commit a foul for the remaining minutes of the match. A few days later, the Fire traveled to New York where Gargan got his last start at right back to date. During this match, Gargan did not foul a soul. He also did not manage to record much of anything on defense except 2 interceptions and 4 clearances. Offensively, however, Gargan put together one of his best games completing 84% of his passes, completing 2 crosses (out of 2) and only losing possession 7 times. Unfortunately, it doesn't seem to have been a good enough performance to earn him a spot back in the starting XI.

Will Gargan Ever Return to the Starting XI?

Dan Gargan lost the starting job. I think the job is now Anibaba's to lose. Defensively, Anibaba is consistent game in and game out while making very few mistakes. On the offensive front Anibaba is very up and down, but he has done well over the last three matches. It's reasonable to think that Anibaba will improve offensively as he gains experience and confidence. Unless Anibaba really messes up or gets injured (or if Arne gets injured), I don't see Gargan making his way back in to the lineup.

Before I first started working on this, I felt that Anibaba and Gargan were pretty interchangeable at right back. Gargan does some things well, Anibaba does some other things well. In my eyes, they were equals who just have different strengths and different style. After going through all of these OPTA chalkboards, I'm more convinced that Anibaba is the right option at right back and that Fire fans might over value Gargan a little too much.

Additionally, there is also the Steven Kinney factor to consider. I missed much of the 2010 season, so I've never seen Kinney play myself, but I hear a lot of people saying good things about him. If Kinney returns to his 2010 form for next year, and Arne decides to settle down in Chicago, then starting spots on Chicago's back line just got a little more competitive. What does Chicago do in this case? Do they keep Gargan around for depth, or do they consider possibly trading him to improve the team elsewhere? There are a couple of teams in the MLS who Gargan could currently start for.

Tweed put up a story about the future of Hot Time In Old Town here at SB Nation this morning:

The staff here finds it difficult to feature multiple stories at the same time. We'll often defer on covering a smaller story because the chronological publishing order puts the most recent story up top. All of these issues and more have been addressed in a complete redesign known as 'SB Nation United'

I almost posted this story ten minutes after Tweed posted his. I'm so excited that this sort of issue is going to be a thing of the past like trying to send smoke signals on a windy day or carrier pigeons getting gobbled up by hawks. If you missed Tweed's post, please check it out. I'm incredibly excited about this. The future's so bright, we're all going to need shades.