Post-Match Chalkboard: Why Are You Such A Yellow (Explicit) Team?

The Chicago Fire defeated the Columbus Crew 2-1 on Saturday. Here is a look at a few key factors from the Opta Chalkboard.

Share All sharing options for: Post-Match Chalkboard: Why Are You Such A Yellow (Explicit) Team?

The Chicago Fire's victory over the Columbus Crew has brought them one step closer to the playoffs. The Fire currently sit 2 points behind Sporting KC and 3 points ahead of New York with a game in hand on each. Not all is safe yet, however, as sixth place Columbus is only 8 points behind the Fire.

The lone Columbus goal on Saturday was the one blemish on a performance that was an all around butt-whipping. This game should have been a shutout for the Fire. It's a little disconcerting that the Fire are still making mistakes that lead to easy goals this late into the season. It's been an issue all season, and it doesn't seem to be going away. The Fire need to do better to maintain their focus from the opening kick to the final whistle, especially over these final 5 matches.

The Crew won the possession battle 62% to 38%, but that did them little good. The Fire held their shape well defensively throughout the game never giving the Crew an opening. The Crew made it easy for the Fire to hold their shape as there was not a whole lot of movement off the ball by Crew players. This lack of movement allowed the Fire to get set and defend with out needing to move or track their opponents. The Columbus offense just seemed to hit a wall when they reached the attacking third: 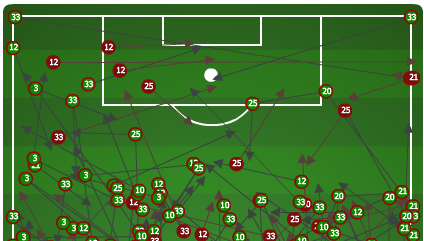 The above image is from the first half. After how awful the Crew were in the first half, the Fire seemed to sit back and invite the Crew to attack. This made getting anywhere near the penalty box a chore for Columbus, so they resorted to bombarding the box with crosses. The Crew attempted 11 of their 14 crosses in the second half: 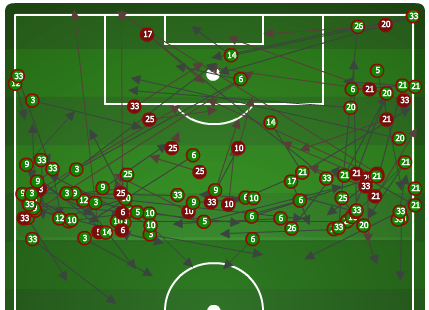 The Crew out shot Chicago 20 to 11, but they only managed to get 6 on target. 9 of the Crew's 20 shots came between the 76th and the 87th minutes. During this frantic period, 6 of the Crew's shots came from within the penalty area. For the other 79 minutes of the match, the Crew only had 5 shots within the penalty area as they had a difficult time even getting inside the 18 yard box: 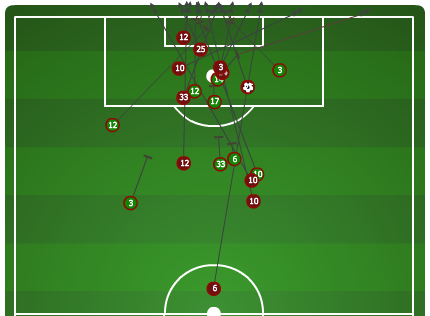 For the little amount of time that the Fire had the ball, they seemed to be able to do what they wanted with it. Columbus gave the Fire plenty of room to move the ball and to run into space.. The Fire were moving so easily up the pitch that the only thing the Crew could do to stop them was to foul them. 11 of the Crew's 16 fouls happened in the first half: 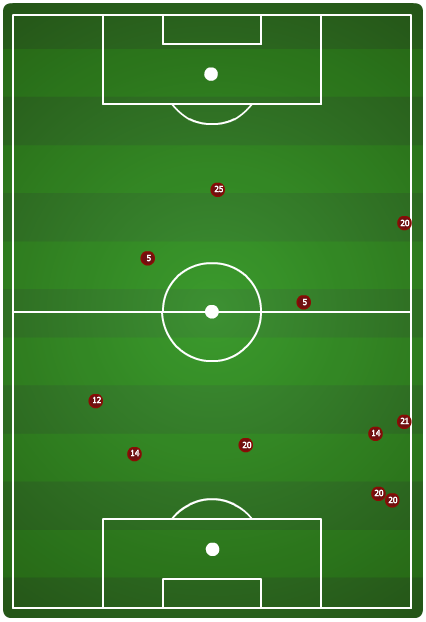 Every Fire midfielder not named Logan Pause was fouled at some point in the game, and Chris Rolfe was the only one of these midfielders not to get fouled multiple times. Patrick Nyarko, as per usual, was the player to take a majority of the beatings as he was fouled 5 times during the match.

Unlike the Crew, the Fire had plenty of ball movement in the attacking third.

And when it came to shooting, the Fire were able to take shots from a much closer distance and get most of them on frame:

Federico Higuain and Jairo Arrieta have been two keys to the sudden resurgence of the Columbus Crew. Keeping these two players marginalized was going to be a must for the Chicago Fire to get a victory.

Aside from the goal, Jairo Arrieta only recorded one shot. He also only completed 15 out or 26 passes, most of which were back passes. Overall, Arrieta was invisible for most of the match. 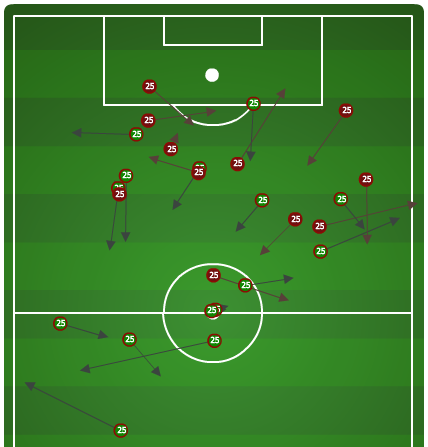 Federico Higuain, from an OPTA standpoint, did not have a bad night. He completed 65 out of 75 passes, completed 6 out of 8 crosses and 5 key passes . 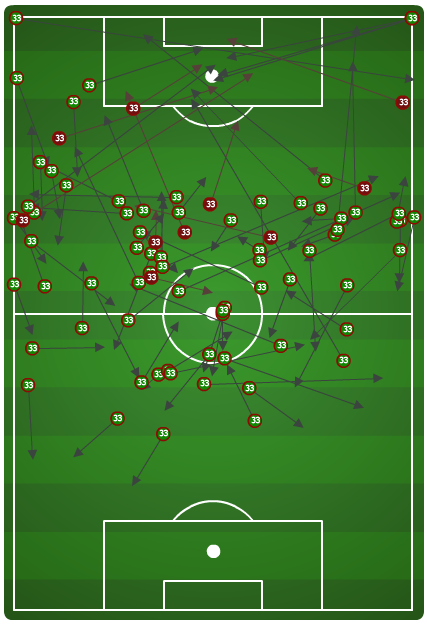 Unfortunately, OPTA does not show how every time Higuain touched the ball, either Alvaro Fernandez or Alex were on him. Higuain only recorded 2 shots in the match. One shot was a header off target, the other shot was blocked and both came very late in the match. Higuain never had the opportunity to take a dangerous long distance strike. He also did not have an opportunity to take a direct free kick at any point.

Sherjill's ability to hold up the ball has been a great addition to the Fire's offense and was the key to Chris Rolfe's first goal on Saturday. When Sherjill holds the ball up, it gives an opportunity for the speedy player in the Fire midfield to make over lapping or cutting runs into open space. 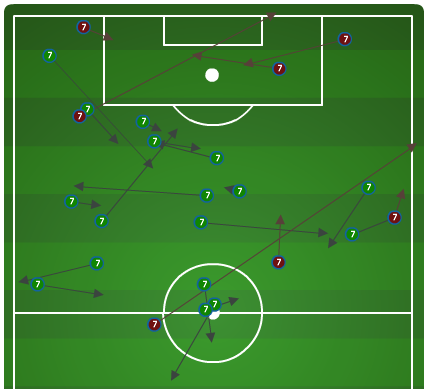 This was a pretty solid performance from the Fire, but it was not a complete performance. This whole year has had that feel where the team has played very well, but (fill in blank). This Friday would be a good time for the Fire to finally take that final step and play a mistake free 90 minutes.