What's in a name: Chicago Fire

Share All sharing options for: What's in a name: Chicago Fire

Whenever I hear the phrase, "What's in a name?", I'm immediately drawn to the eerie but utterly thought provoking monologue toward the end of the 2003 film American Splendor. This scene features Paul Giamatti as Cleveland underground comic book legend Harvey Pekar wondering outloud about his fellow Harvey Pekars he finds in the phone book. It sounds like it could be a comical scene (There are other Harvey Pekars? Why... I should be the only Harvey Pekar!) but the mood is downright serious, almost morbid if you let it be. Even if you have seen it before, it deserves a re-viewing or a play while you go through this read.

A core question that's evoked is how can one Harvey Pekar, one Jane Addams, or one Louis Sullivan bring up an entire set of connotations, memories, and thoughts while three other people with the very same name bring up their own blank slate? It's something I think about often when I'm thinking about how I affect other people. I have my own concepts but I guarantee the reality is very different. Because of our different experiences, everyone's name means something at least slightly different to every person in the world.

It is important to have that perspective when talking to people about the name ‘Chicago Fire'. Some individuals out there are ignorant to the giant inferno that started on October 8, 1871 and destroyed 1/3rd of Chicago leaving thousands upon thousands homeless. When these unaware souls hear ‘Chicago Fire', they think a generic name like ‘Magic' or ‘Lightning'. Others are quite aware of the event and they consider the whole thing to be a tragedy. To this group, it's appalling that one would name a sports team after an event that created such destruction and devastation to its namesake.

Those that have embraced Chicago have a very different connotation with ‘Chicago Fire'. And I'm not exclusively talking about those that have embraced this soccer club either. The unique connotation I'm referring to is not the result of Frank Klopas, C.J. Brown, Logan Pause, or Patrick Nyarko. This connotation comes from the result of Marshall Field, Daniel Burnham, William Le Baron Jenney, and the many others that helped Chicago rise from the ashes of the Great Chicago Fire. 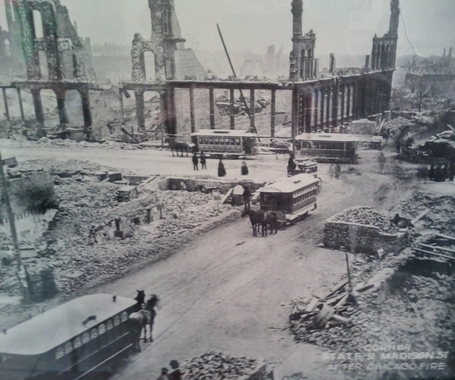 Citizens of this young city had a choice on the morning of October 10, 1871 as the flames finally retreated: leave for St. Louis or grab a shovel. Depart for Milwaukee or defiantly shove ash to the side. Surrender to the non-burned boom town of Indianapolis or stick in the ranks of their fellow citizens in a city that wasn't even 40 years strong. Everyone came together and they shook the damn thing off. Tens of thousands of people were left homeless and yet determined they were still at home in Chicago. Rebuilding began right away. The rubble and debris caused by the fire was shifted into the lake creating more land to build on. And build they did.

The world looked at Chicago with awe as its citizens refused to be beaten. Instead of being demoralized, our municipal forefathers were galvanized. Aaron Montgomery Ward connected the expansive Midwest to city commerce by setting up the first dry goods mail-order business just 10 months after the fire. The aforementioned Jenney completed the world's first skyscraper in 1884. Chicago had a smaller population than St. Louis in 1870 and even with the conflagration, Chicago had a higher population in 1880 than the Missouri city by over 150,00 people. Chicago gained on St. Louis and Kansas City due to the Civil War but no city could gain on us when we were hit the worst.

By 1893, Chicago was ready to fully invite the world and put on a show. Our fair city was awarded the honor of hosting the World's Fair: Columbian Exposition, beating out New York, Washington D.C., and St. Louis in the process. A city in a city was designed by Daniel Burnham. His monuments and grand vision launched an entire new movement of architecture and city planning. Over 27 million people attended the Fair in six months. The crowds were often so packed, people stood shoulder to shoulder. When Gene Wilder combs over the Fair, you'd think it was a fairy tale Wonka land come to life. Contemporaries of the day crowned it as the dawning of a new era. 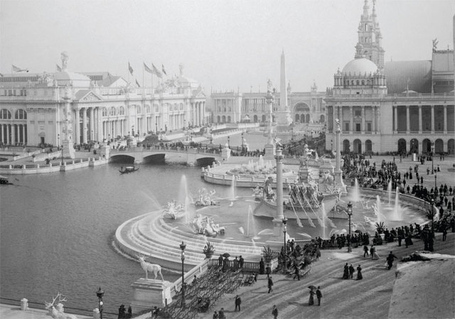 This bidecadal period in Chicago's history is considered its golden era. American history, even global history has seen few turnaround success stories like it. Many cities have been wiped off the map under similar circumstances. Chicago made its dot larger. Death's Doorstep became our city's Fountain of Youth. It's not only justified that this team is called the Chicago Fire, it was overdue someone provide a reminder that lives on in the ethos of our daily civic living.

Yet, we still need more of a reminder.

The mind's instinct is to gravitate the consciousness to the comfortable.

In an environment with flashy red jerseys, Dalmatian mascots, and opponents like Timbers, it's easy to think of ‘dancing flames' or ‘menacing heat' that simply propels the enemy from venturing too far into danger.

What's in our name?

Tragedy. Suffering. Destruction. Even Death... But that's life. Life made better, life made more wondrous by those that turned Chicago around. We should honor their sacrifices large and small every October 8th. It's important that we celebrate their achievements every October 8th. Let us aim to match their works of their devastation-induced inspiration. We should be perpetually thankful the fates haven't tried to match Chicago's previous misfortune.

This city isn't going to have other golden eras all by itself. As a Chicagoan, the torch has been passed to you. Dip into this city's spirit, carry the light bright to the world, and don't ever forget about our unique October 8th.

This October 8th, the Chicago Fire celebrate the 15th anniversary of the club's founding. More information on this very special celebration can be found at fireanniversary.com