Over the next several days in this space, I’m going to look at the tactical variations available to the Fire with their 2013 roster

Today we're starting with the formation that was Frank's favorite last season: The 4-2-3-1.*

The 4-2-3-1 has become, over the last decade, a quasi-default formation at the game's highest levels, and its subtleties have become familiar to many fans: the striker as a deep-lying hold-up man, the wings flowing in behind him; the double pivot protecting the ability of the fullbacks to provide width; the wingers switching sides ("inverting") to make slashing toward the goal easier and thereby becoming wing-forwards.

The formation's four ‘bands' also make it simpler to implement defensive pressure all over the pitch - a hallmark of the last decade of tactical development has been the increased use of high pressure, with the intention of denying any and all simple passes all over the field.

Let's start by assuming status quo ante, which found our Men in Red lined up like so: 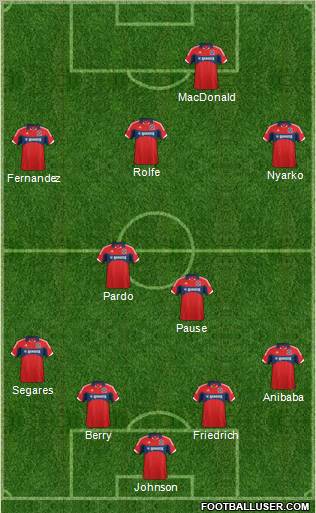 This lineup was very familiar by the time the playoffs rolled around, both to the Fire faithful and our opposition. Once Rolfe settled into playing in the hole after a half-season of injuries, the goals started flying in and we entertained thoughts of winning the East. In short order, a memo got out that Chris Rolfe enjoys clubbing the same way baby seals do, and our AmeriDane import got a steady diet of noogies and swirlies from the league's hard men.

With Rolfe taken out of the game - and he was, time and again down the stretch - the Fire had no answers offensively. Teams found that our distribution from the back wasn't good enough to bypass midfield reliably, and (so emboldened) pressed with impunity. Teams found that Rolfe couldn't hold the ball in the minefield of midfield and hounded him into silence, and we couldn't get enough from the wings to punish that tactic.

Typically we should have seen the more advanced of the 2-band - Pardo - coming free as a release in midfield, since our opponents were both pressing our back-line and double-teaming Rolfe. Pardo was on his last legs, though, and neither Paladini nor Pause showed the ability to both relieve pressure and make a telling pass. The ball would wind up bottled up in the Fire's defensive end until the inevitable wayward long-ball forward.

When the formation worked, the Fire could have their cake (a setup that enabled great defensive pressure) and eat it too (scoring goals in bunches). When it didn't, Chicago looked out of ideas - unable to possess the ball well enough to control the game, and unable to break at pace well enough to reliably counter. The Fire staggered through the end of the season, picking up only 4 points in the last 5 games before surrendering meekly to Houston in a home playoff game. 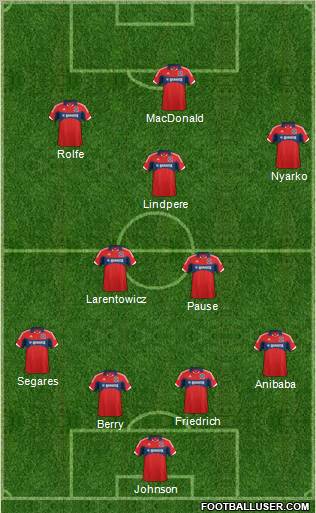 All of which brings us to 2013. Flaco's gone to Qatar; Pardo's gone home. We've gone all-in on combative midfielders, signing Larentowicz and Lindpere. So how might Frank's favorite formation work this season? And how do our recruits solve the issues brought to light down the stretch last year?

A quick glance at the roster tells us that - given the settled state of the back line - the real question we have to answer, if we're assuming the formation doesn't change, is who will play on the left wing? There are other questions, of course ("How are we going to keep all these midfielders happy?", for instance), but I find that answering the first question makes filling out the lineup sheet a simple matter. Here's a couple of options, along with what each offers.

Move Rolfe to the wing: Back when Denis Hamlett was at the helm, I would rant for days about his use of Chris Rolfe on the right wing. "He's too far away from the goal," I'd complain on BigSoccer. "He's a lightweight. He's getting killed out there." And on, and on, and on. Yet here I am, about to argue that he should go back on the wing in this shape.

It's not the contradiction it might appear to be. The team with Blanco played 4-4-2, and Rolfe's role on the right was as a traditional midfielder. He was asked to put in an extra shift defensively to facilitate our hunchback's freedom to stroll about and think the game.

In this formation, I'm putting Rolfe on the opposite wing - the left wing - and higher up. He'll play as a wing forward, which would use his intelligence, mobility and good connection with Sherjill to great effect. It will also, not coincidentally, get Chris out of the mixer in the middle of the field where that parade of shin-kickers did a number on him down the stretch last year.

His responsibilities in this position are much like a striker, and putting him on the left means he can cut infield to unleash that heavy, dipping shot we all know and love. He also will naturally create space for Segares' overlapping runs by tending to play towards the middle.

Putting Rolfe here answers a lot of the follow-up questions about the lineup. Lindpere slides into the central attacking midfielder slot with Rolfe on the wing, which puts Larentowicz and Pause in the holding band. In this formation, Pause would be the anchorman, staying at home for cover no matter what, while Larentowicz has a bit more freedom to range forward. As noted above, Rolfe is expected to clear out space for Sega by moving infield, while Nyarko plays as a traditional winger - staying wide and taking left-backs on - which keeps Anibaba at home for the most part.

The advantages over the 2012 iteration are pronounced. Rolfe is a much more dynamic player than Fernandez, especially when given a bit of space. Lindpere and Larentowicz are battle-tested hardasses who won't shrink when the opposition lines up to kick shins. Seen in this way, it's possible to understand every personnel move to this point as a reaction to the collapse down the stretch last year. If I was lining the team up in a 4-2-3-1, this is the lineup I'd prefer.

Put Alex on the wing: There are more than a few fans of the Fire who don't appreciate the body of work created by the man Univision calls Logan Alan Pause. "He doesn't pass the ball foward," they complain. "He looks scared with the ball." So, this one goes out to you, FireFan2001: A formation that pinches out Pause.

With Alex on the left, Rolfe moves back into the hole behind MacDonald; Lindpere moves to a box-to-box role, and Larentowicz plays pure destroyer. Pause cheers for the team and acts as cover for every midfield position and right back.

Here's the magic sparkle-pony dust one must get about formations: Formations are just a correlation of tendencies. In this shape, Alex and Nyarko just play a bit deeper, and Rolfe avoids marking by stepping forward, presto, it's a 4-4-2. If we're going for broke and Lindpere's pushing up at every opportunity, it's a 4-1-3-2. If we're falling back into a compact defensive shape, hoping to hit on the counter, it's a 4-5-1.

Which brings us to the next installment of this series, coming soon: What other shapes are out there? What ones might work with our roster? Should we go 4-4-2? Diamond? Skinny diamond? The W-M? Give us your take, tactics nerds. I know you're out there!