How will the complete lack of expectation affect United? Will the pressure buckle a Fire team in yet another must-win contest?

Share All sharing options for: All To Play For: DC vs Chicago, MLS #31, preview

It's a simple matter to assume that our Chicago Fire will finish the evening three points better than they started it. Tonight's opponent, DC United, has lost 21 of their 30 MLS games; in fact, United's management and players have said for several weeks that playing for the US Open Cup was all they had left in 2013. Oh, and they're less than 72 hours removed from beating Salt Lake in Salt Lake for that trophy - meaning everything they had to play for is in the past, and all that's left is playing out the string.

In contrast we have the Fire, who have struggled manfully back into a playoff race that saw them left for dead after 10 games. Chicago is eighth in the East, but only four points back of fourth and two points behind the final playoff spot - this despite a tragic September which saw periods of dominance undone by late goals. The Fire have played well in stretches; in order to make the playoffs, they need a ‘stretch' lasting about four games. Unlike the men from the capitol, Chicago's have everything to play for: A hot streak, right about now, could propel them into the playoffs on the right foot, and MLS history has shown it's better to be streaky-hot than solid once November rolls around.

So, one team with nothing to play for, another with (theoretically) everything; one team getting some new faces some minutes, while the other is thick with tested veterans. Should be a simple ask, no? Well, no.

All of the pressure, all of the expectation in tonight's matchup lies on the shoulders of the Men in Red. Anything less than a passionate, coherent domination of this DC United team should be unacceptable - this is a team we dismantled 4-1 in July, without ‘Cacha' Rios! Frank being Frank, expect a return to status quo ante in the lineup, meaning we should see the Fire in the familiar 4-Y-2 formation: 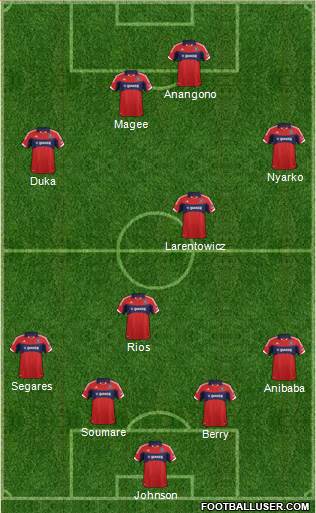 Key aspects of this formation are the very fluid front four (all of whom press very high), the forward destroyer in Jeff Larentowicz, and what could be a big/little partnership between Juan Luis Anangonó and Mike Magee. This is the lineup most capable of pressing hard higher up the pitch, which means they'll be looking to create turnovers before DC transitions fully into attack, then counter at pace, usually using through balls. A central midfield of Larentowicz and Rios snuffs out movement between the lines and wins most of its duels, but won't create anything through possession in the middle of the park. 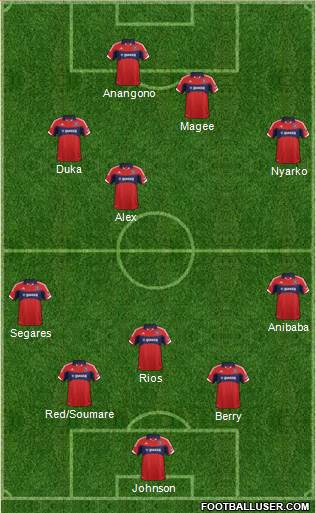 Another possibility is that Frank looks at the second half against Montreal and tries that formation on for size - although this would require one of Soumare or Larentowicz to sit. In it, Rios is given all the responsibility for cleaning up the midfield, dropping into a pure anchor role in front of the center backs, while Alex plays farther forward. The front group of five presses in packs and looks for quick turnovers; in longer possessions, they are joined by the wingbacks, with only Rios and the center backs minding the store in the back. Segares tends to work in combination with Duka, who likes to drive infield with the ball, while Anibaba sits back a bit more, crossing from deep and leaving the wide work on the right to Nyarko.

We're going to have some lovely ‘who knows?' right up until lineups are announced - this is a team that played two time zones away just three days ago, so expect a lot of young faces. Here's a guess from our sister blog, Black & Red United: 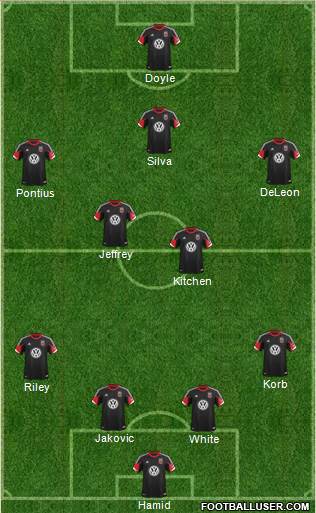 But who knows? Crazy thing with DC is, they've actually got young kids who need minutes on the roster! And they may play them! I know! So we could see Conor Shanosky in central defense, or Collin Martin on a wing, because apparently playing one's Homegrown talent is something one can do.

The key differences between DC's formation and that deployed by the Fire is in central midfield - Luis Silva contributes more to keeping possession than Magee. Conor Doyle is a mobile, intelligent target striker who understands how to play the position, while Pontius and DeLeon can be either terrifying or stultifying in turns.

Magee and Anangono vs. themselves: In the three or so games that ‘Magic Mike' Magee and el Serpiente have played together up top, they've shown little ability to create the sort of mental problems that the Magee/Rolfe partnership specialized in. Anangono's superior physical presence may, in some ways, simplify the game for opposing defenders - many MLS defenders are terrible at managing space, and so are thrilled to have their job come down to ‘smash into the opponent's big guy for 90 minutes.' I'm thinking of Ethan White here. If Anangono cannot dominate those matchups (which he hasn't so far), he's going to have to get better in space.

Anangono vs. his first touch: We are clearly trying to deploy our big Ecuadorian as a target striker, and his size and mobility do have a bit of a ‘Baby Drogba' vibe - but my goodness does his touch need to improve for him to function in the role. Maybe he's just not in form, but Anangono's touch has failed him as often as not in a Fire kit. Attacks stall as he chases down the ball, even when it's not lost. As poor as Rolfe has been in front of goal, his struggles haven't been the kind that make others around him suffer; this Anangono touch issue does, so here's to hoping it's an issue that resolves itself.

Fire wide men vs. DC fullbacks: Unless Klopas gets brave and sits Larentowicz for Alex - or keeps Big Red in the backline, leaving Soumare on the bench - then we're going to see our all-legbreaker, no-gamebreaker central midfield again. This puts a good deal of pressure on the Fire wingers, likely Duka and Nyarko, to create chances. Frankly, against Chris Korb, Daniel Woolard, James Riley, or Denis Iapchino, we should expect the chances to come thick and fast. Should the starters not look sharp, expect a quick hook, with Rolfe and Lindpere available off the bench.

Chicago nerve vs. breezy DC: There's something miraculous about having nothing left to lose - it's certainly easier to play carefree football. If the Fire cannot get ahold of the game in the early going, or (horror of horrors) start the game in their usual funk and give up a goal, the pressure will mount. We need this, they don't. Here's to hoping we see the cf97 that took the field for the second half against Montreal, in spirit if not in names.