Around The Campfire: Fire Foundation Collecting For Kids

Are you a Chicago Fire Fan looking for a way to give back to your community this holiday season?

Share All sharing options for: Around The Campfire: Fire Foundation Collecting For Kids 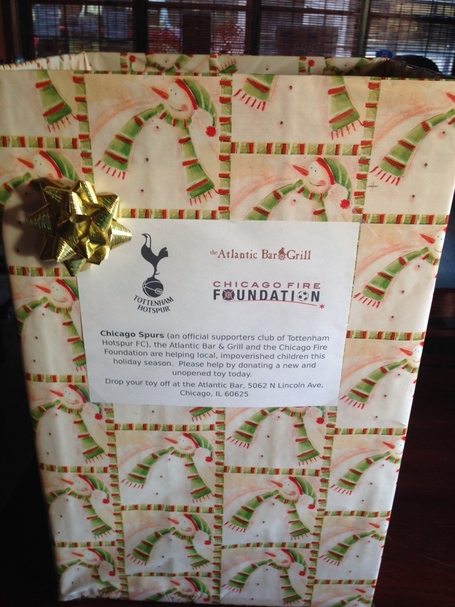 Between now and Saturday December 14, drop your toys off in the box located next to the bar at the Atlantic Bar and Grill at 5062 N Lincoln Ave Chicago, IL 60652. All toys must be new and in their original packaging.

On the evening of Saturday December 14, the Chicago Fire Foundation will be joining the Chicago Spurs for a holiday party at the Atlantic Bar and Grill. The Atlantic is offering a generous deal to anyone who brings an unopened toy. All those who donate can enjoy $10.00 all-you-can-eat fish and chips! Stay tuned to my Around the Campfire column for more details.

The Chicago Spurs and Fire Foundation toy drive is a great way to give back to the community and help make impoverished youths' holiday season a little brighter.