For some people the fixture list is like a Christmas present and the MLS released their 2014 schedule earlier than normal, just in time for the holidays 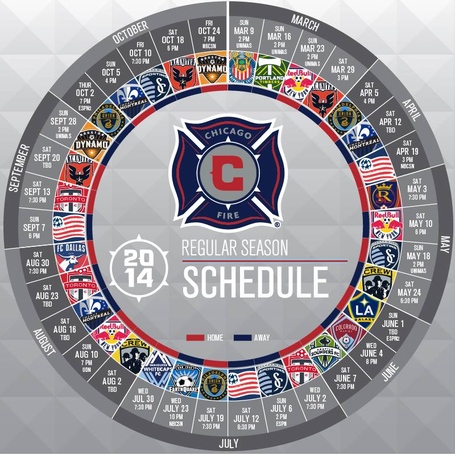 I know I am one of those people that can't wait to see the new schedule for the up coming season. Even though the 2013 MLS season isn't officially over yet, the league decided to release the schedule for all 19 teams in November instead of the normal month of January. When the schedule is released I always take a few hours out of the following few days to day dream about how my weekends are going to be spent and the possibility of making 1 or 2 road trips to support cf97, despite the misses trying to thwart my plans.

You can find the complete Fire fixture list here and browse for yourself. In summary, the Fire open up on the road in LA just like in 2013. - but instead of having to play the Galaxy, we take on Chivas USA on March 9th. This is followed by a trip to Portland, and then the home opener Sunday, March 23 against 2013 Supporter Shield winners New York RedBulls. Within the first 13 games of the season we should have a very good idea of the team and where it is going, as nine of the games are versus 2013 playoff teams.

The Fire, as well as the rest of the league, will be taking a break for the World Cup almost the entire month of June with play resuming during the first week of July. What is interesting about the Fire's schedule is that they really don't have any extended road trips or home stands. The most games that they play away in a row is 2 and the most games at home in a row is 3.

The 2014 season could be decided within the final nine games of their schedule. After a home date with Dallas on August 30th, the Fire finish up their season facing Eastern Conference opponents, with only four of those nine at home. Overall, the Fire have a pretty balanced schedule, with their only tough road trip to start the season. The schedule is also cf97 fan-friendly, with only have two of the generally disliked Wednesday night games on the 2014 list.

Here are a few of the fixtures I'm personally looking forward to:

Those are just a few of the games I look forward to in 2014 but don't get me wrong I do look forward to all 34 of them. What about you the reader? Any games stand out for you? What ones are you looking forward to as the Men in Red look to compete for the Supporters Shield and MLS Cup?