In what is hopefully the first of a series of media coronations, SBNation editors overwhelmingly voted Magee the league's most valuable with 14 of 25 votes

The thing that makes Mike Magee really valuable, the thing that makes me confident the Fire can build around him - that this wasn't some one-off career year, and he'll be crappy and egotistical next year - is that all these awards clearly don't mean two shits to Mike Magee. I mean, look at him accepting the $1,500 check from Section 8 for Meals on Wheels, all thanks to him being named Most Valuable Player by supporters: 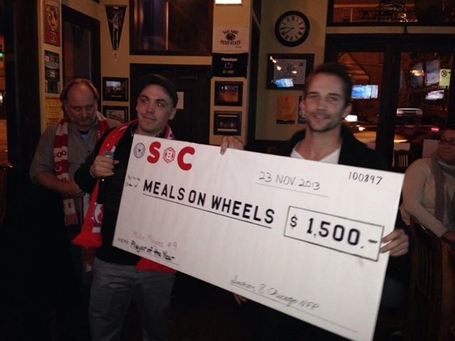 I mean, is there a word, perhaps in German, for that feeling one has when one feels one has failed but everyone is celebrating one's accomplishment? For grinning through that pain? Because, for my money, Magee looks, in that photo, like a guy who's totally chagrined by the hoopla. He's the narrator character from "Cold Missouri Waters" (google is a friend at times like these), sitting on-stage at a memorial for the 13 dead, trying to act happy.

He's sour because, in his mind, he failed. The Fire didn't make the playoffs. They didn't win the Open Cup. He failed.

That's why I voted for Mike Magee for the league's MVP, despite leading a team that couldn't find its way into the postseason - he carried this team on his back for six weeks while it found its spine, then kept standards high as it rounded into form. He transformed a team slumping toward futility into a team striding purposefully into futility, and there's not a thing wrong in the world with that. Sometimes, a bit of swagger makes all the difference.

P.S. Here's Cold Missouri Waters, a song as bittersweet as Magee feels amidst the round of parties where everyone knows his name: