Share All sharing options for: Fire Welcome Back C.J. Brown

As first reported last evening by Guillermo Rivera of Chicago Fire Confidential, CF97 will today announce the return of Ring of Fire member C.J. Brown to the club, this time as an assistant to head coach Frank Yallop.

Like Chicago, C.J. Brown was snubbed by the powers-what-is in MLS in 1996, spending two years playing for the now-defunct San Francisco Bay Seals before the Fire selected him in the supplemental draft prior to the club's inaugural season in 1998. He went on to 296 official appearances wearing the club's badge, winning the MLS Cup once (in '98) and the US Open Cup four times (say them with me: '98, '00, '03, '06). Brown also was capped 15 times by the USA between 1998 and 2003. He retired after the 2010 season and was honored the next year with induction into the Ring of Fire, the club's hall of fame. 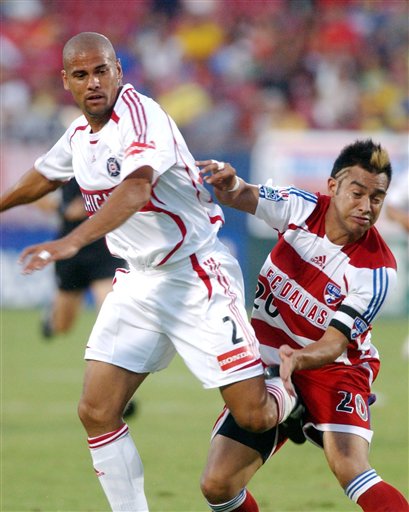 Brown's hard-nosed, demanding style on the field endeared him to the club's supporters. The club's failure to hire Brown in a coaching capacity following his retirement was a source of some consternation among the fanbase.

Unperturbed, Brown landed on his feet, serving as an assistant head coach to the meticulous and successful Jason Kreis at Real Salt Lake - but never moved to Utah full-time, maintaining his home in Illinois. It is expected that Brown will fill a similar role with the Fire now that he's home again.