League website declares Rogers trade to LA the Controversy of the Year, somehow ignoring the smoldering dung-pile of discrimination lawsuits against Chivas USA

Share All sharing options for: More MLS Whitewash: Controversy of the Year?

Hey, content is content. I can dig it. It's not easy filling the infinite space of the internet with words, pictures and cat videos. Here at Hot Time, the writers are constantly getting emails from the editor-in-chief (i.e., me) asking, "What you got going? Anyone have something working I don't know about?" The internet moves on with shocking rapidity; don't publish for three days and watch your numbers plummet.

So, I get it. It's still a month until the preseason, and you're paid - if you're lucky, like the mostly-guys at MLSsoccer.com - to keep that content flowing. Stories, man! We need stories. And so we get things like countdown lists, and the four funniest rabonas of the year. Graham Zusi's cookie recipe. Omar Gonzalez doing yoga poses in his underwear. Home videos with Lee Nguyen. The internet is a merciless beast, devouring content, ceaselessly slouching off nowhere in particular to be born again anew every day. And it's the offseason - the easy stories are weeks away.

Every so often, though, even the internet needs to be called to task. Even the unblinking demand for content doesn't excuse outright foolishness - and it's difficult to name MLSsoccer.com's choice of ‘Controversy of the Year' anything but foolish. The Galaxy traded what they thought was a dependable but unexciting player (Mike Magee) for Robbie Rogers, the first openly gay male athlete in a professional team sport.

Let's unpack this a bit more. The supposed source of the controversy is the fact that Rogers announced his determination not to play for the Chicago Fire, this despite the fact that the Fire held Rogers' rights after a trade with Columbus. Why didn't Rogers want to play in Chicago? Well, it turns out Rogers retired from the game before coming out largely because of the reception he assumed he'd receive; after years of observing the baseline homophobia in football, he feared being marginalized, mocked, and degraded. So he retired from professional soccer and came out all in a single day. 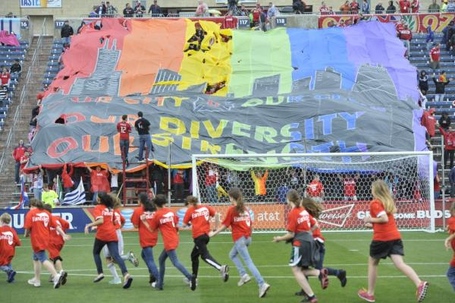 A funny thing happened after he came out, though. When Rogers started talking about playing again, MLS fans didn't mock or degrade him. Whiskey Brothers Aught Five, one of the Fire supporters' groups, issued a statement welcoming him, while reminding the world that they'd even done some magnificent tifo on the topic of inclusiveness. The Galaxy also made kind noises. And when Rogers said, essentially, "Hey, no hard feelings, but if I'm going to be at the center of this media circus about my sexuality, I'd like to have my family around," it didn't feel like a player grandstanding his way to his desired club. It felt like a guy who'd been through a lot, who'd weighed the pros and cons, and came to a simple conclusion: I need my family by my side to do this, and if I can't have that, I'll do something else.

It's hard to hate on someone for asking, in a straightforward way, if they can follow their dreams. And, of course, the whole thing worked out magnificently for the Fire. Mike Magee spied his opportunity, finally, to both go home and get out from under the massive shadow of LA's ever-present high-dollar Designated Players. Rogers worked his way into the lineup, got dinged up a bit, and was generally disappointing on the field. Sure, the trade turned out lopsided, but it wasn't obviously so at the time. Magee metamorphosed from a solid, dependable pro into the league MVP, and Rogers struggled after a six-month layoff. A lopsided trade is controversial? How is this whole thing controversial?

Especially, one wonders, when weighed against the true controversy of the year in MLS: The ongoing legal troubles instigated by Chivas USA's blatantly illegal hiring practices. In the USA, it is illegal to base hiring or firing decisions on a person's racial or ethnic background; how, then, to understand Jorge Vergara's oft-quoted statements that "if you don't speak Spanish, you can go work for the Galaxy, unless you speak Chinese, which is not even a language?" How to understand the lawsuits by Ted Chronopoulos, Dan Calichman and Cynthia Craig alleging a systemic attempt to purge the club of non-Latinos, even down to the Academy level?

And how to understand this ‘Controversy of the Year' article as anything but a bit of corporate eyewash? MLS' single-entity structure means that the gaffes of Guevara and team president Jose David are also the league's gaffes. Don Garber has some fine hand-tooled and focus-tested talking points on the issue, but that doesn't mean it's gone away. The lawsuits chug along.

There were bigger stories in MLS this year, certainly. But when multiple executives of a club are accused of violating discrimination laws - not in the media, mind, but in Los Angeles County Superior Court - now that is controversial. Remember last year's controversy of the year? Some players used bigoted language during games. Now, we have this and it's all "Whoops, we said we intend to break federal law, but really, folks, we were just fooling? No big deal. Hey, look over there! A player wants some say over where he lives and works! My goodness, what a scandal. Pay no attention to the man behind the curtain."

Ah, for just the tiniest bit of transparency. Perhaps in the new year.