Match will be held with the north London club to be held at Toyota Park on July 26; special deals available for CF97 season-ticket holders starting Jan. 8

Share All sharing options for: Fire Will Host Tottenham Hotspur In Summer Friendly

Frank Yallop mentioned, in the Town Hall meeting for season-ticket holders, that his contacts in England made doing business there a great deal easier. Now, a mere 16 days later, the club are announcing a midseason friendly with English Premier League team Tottenham Hotspur, to take place July 26 at Toyota Park. The friendly match is the highest-profile non-competition matchup for the Fire since the Manchester United friendly in 2011. This is also the earliest the club has ever scheduled a summer friendly. 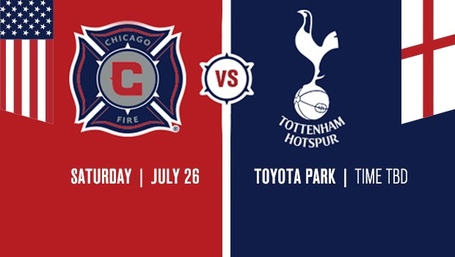 In addition, the Fire sent out an e-mail to all season ticket holders notifying them that they will have first access to the best seats, beginning Wednesday, January 8th at 10 am.  Season ticket holders will be offered a 35%+ discount off of the face-value of tickets, and can purchase up to two tickets for the friendly for each season ticket package they own. The Fire will hold all regular season-ticket holders' seats until the 17th of January, then tickets will go on sale to the general public on January 24th.

Located in north London, the Lilywhites will make their first trip to Chicago for this late-July match. Tottenham Hotspur Football Club was founded as Hotspur F.C. in 1882, but didn't join the nascent Football League until 1908. Spurs have won the English first division twice - in ‘51 and ‘61 - and the FA Cup eight times, most recently in 1991. In more recent times, they've narrowly missed out on Champions League qualification, a record of frustration that dovetails nicely with the Fire's recent past - breaking through with a fourth-place finish in 2010, then failing to replicate the feat since, finishing fifth in ‘11 and ‘13 and fourth in ‘12, when FA Cup champion Chelsea took the spot slated for Spurs., In addition to Manchester United, EPL clubs the Fire have faced in international friendlies include Aston Villa, Everton and Derby County.

On the press release the Chicago Fire Chief Operating Officer Atul Khosla said, "In Chicago, the Fire proudly represents the global game. Making the investment to bring a club like Spurs to Toyota Park demonstrates our continued commitment to facilitating the growth of soccer. We welcome the opportunity to showcase Chicago Fire soccer to a broader base of soccer fans, not only here at home, but also those from around the globe." The full press release can be found here.

As a rabid fan of both the Chicago Fire and Tottenham Hotspur, I find this match up to be extremely exciting. The  atmosphere of these Friendly matches are always kinetic, with fan bases from both clubs showing energy and passion.  Even if you are not a fan of the Spurs, it is a wonderful chance to see world class talent up close.

Unlike the 2011 match against Manchester United, the Fire will have the opportunity to showcase Toyota Park to fans of the EPL club. The point of this type of friendly match is to display the Fire's talent to fans of the sport and expand the profile of soccer in America around the world. These types of friendly matches also tend to be lucrative for the club in the form of ticket and merchandise sales.

I, for one, will be the first in line to purchase a commemorative scarf! My only difficult decision will be whether to wear my Fire kit or my Tottenham. {Ed - Wear the Spurs kit? You're fired.}