Many #CF97 supporters pine for a return to a two-striker set; in his next tactics piece, Sean Spence considers the pros and cons of Ye Olde Formation

Share All sharing options for: The People's Choice: A classic 4-4-2

What is there to say about a 4-4-2? Fifty years of habit made it the default formation at every level of play until about 10 years ago. If you watch a lot of soccer on television, you've seen every kind of exotic formation rendered as a 4-4-2 by a lazy or uninformed producer in the pregame graphic. In the minds of the non-soccer-loving public, the 4-4-2 is just 'how you line up for soccer.'

The defensive solidity of "two banks of four" has years of success to recommend it, and leaving two strikers up top means a two-man counter is always available even when the rest of the team is doing nothing but chasing the ball. The 4-2-3-1, detailed in this piece last week, is merely the most recent '4-4-2 killer' in football tactics, the 3-5-2 (requiescat in pace) was an earlier counter-tactic. The 4-4-2 is the bêchamel of football formations: Bland but bursting with promise, a great base from which to build up or improvise.

It's also the formation most frequently put forward as an alternative by Fire fans on the internet, and not without reason, especially since the team's re-acquisition of Chris Rolfe. Rolfe's talents seem an ideal fit to be part of a striking tandem - his movement off the ball and quick combination play simply don't matter without a foil to play off of. And, as mentioned before, playing Rolfe behind a target striker doesn't seem to work, as he gets crushed in the midfield mixer.

So we turn to the 4-4-2. How might a simple 4-4-2 work for Chicago? Here's a look at a possible lineup, and some of the ramifications of playing this way. 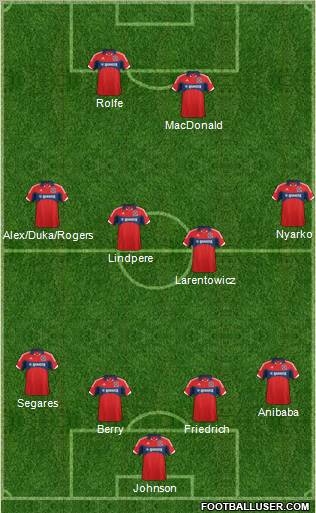 In the back, the usual quarto of Gonzalo Segares-Austin Berry-Arne Friedrich-Jalil Anibaba seems likely, unless odd-man-out (and captain) Logan Pause can force Jalil to the bench. The central midfield is set, with offseason acquisitions Jeff Larentowicz and Joel Lindpere playing just a bit offset. Patrick Nyarko is a pure winger on the right. The dogpile of bodies on the left (Dilly Duka/Alex/Brendan King/the Atouba kid/Mike Videira/Corben Bone?) will somehow sort itself out - at least with crazy depth Klopas can just skim the best form off the lot of them. At least, we all hope so.

(Note: I wrote this paragraph before the Fire dealt Dom Oduro to Bananarama for Duka and the rights to Robbie Rogers. The potential addition of Rogers - a classic chalk-on-the-heels left winger - to the Fire roster changes my evaluation of favored tactics quite a bit, as I will discuss below.)

In general, the 4-4-2 is a much less programmatic formation than the 4-2-3-1 - the roles are more fluid, and the demands on the players' mental abilities are greater. In a 4-2-3-1, for example, the fullbacks know they have the double pivot to cover forward runs; in a 4-4-2, the coverage is not there ready-made, and so forward runs have to be made judiciously and with an awareness of the risks inherent. In a 4-2-3-1, we tell Rolfe to get into the hole and make plays; in a 4-4-2, he might drift into the hole if space shows there, or Lindpere might, or MacDonald, or a winger cutting in, each of which would prompt a different reaction from the teammates in the vicinity. The 4-4-2 will demand more awareness from every man in red (or, cough cough, navy blue).

In the Fire's first preseason matchup the team came out in a 4-4-2 with Rolfe and Sherjill MacDonald up front. The offense was patchy, as could be expected barely a week into camp; most of the noise was made by the second group, which featured two players very much under the microscope for playing time: Danny Paladini and Oduro.

What interested me, though, was the success Rolfe found playing two-man games all over the left side of the attacking area. MacDonald, Lindpere and Atouba - every player in the vicinity - got involved with Rolfe at one point or another to good effect. This kind of play is the sweet spot for Rolfe. Some not-insignificant portion of our hopes for 2013 rest upon creating these kinds of opportunities for our rascally American poacher.

The 4-4-2, then, offers Rolfe a ready foil in MacDonald. It also starts the Yank high enough up the pitch that he can evade simple man-marking by shin-kicking midfielders. If we're playing 4-4-2, pay attention to Rolfe - he needs to be involved to make it tick.

A standard 4-4-2 is sometimes called a 'flat 4-4-2' because the midfielders all take a similar starting position, making a flat line across the field. This shape is an important part of the tactic; without a commitment from all four mids to stay organized in space, the 'two banks of four' defensive shape is compromised and much more easily exploited.

To this end, the central midfielders have a responsibility to control the center of the pitch. This is typically done by what is sometimes called a 'pulley system' - when one guy moves forward, the other sinks toward his own goal to cover. Larentowicz, Lindpere and Pause have, over their careers, shown they understand this duty-first mentality, while Paladini's bona-fides on this matter are just coming under scrutiny.

The fullbacks have a similar conundrum, since (as discussed above) they are losing the warm, comfy cover offered their forward runs in a 4-2-3-1. The pulley system simplifies the decision-making, ensuring that at least three defenders stay back to corral counter-attacks.

God bless Gonzalo Segares. It's been a few years now since the Fire have had anyone besides Gonzo provide width on the left. We've had Nyarko dancing up and down the sideline on the right, and a succession of left mids who wanted to tuck into the middle. All of which has left Gonzo with the unenviable combo-task of 'defender/winger.'

Sega's done well in that role, but he's 30 now, and without proven backup in the position. It is hard to imagine that the Costa Rican can continue to tear up and down the sideline game after game; can a change in tactic help protect 'Zalo?

Well, sure, so long as the Fire have the personnel to pull it off. A flat 4-4-2 keeps the fullbacks home more because they're supporting traditional wingers; this is where the addition of Robbie Rogers could change the look of CF97 quite a bit. Rogers is, as I said above, a classic winger - on the left he stays wide, trying to beat defenders with pace and dribbling using his good left foot, looking to get to the byline and whip in crosses. The addition of a true left winger could signal a more stay-at-home role for Segares.

So the 4-4-2 gives Rolfe what he needs, leverages this team's relative experience in midfield, is more flexible in intent, and offers an opportunity for fantastic width. So why not the 4-4-2? Let's talk downsides. 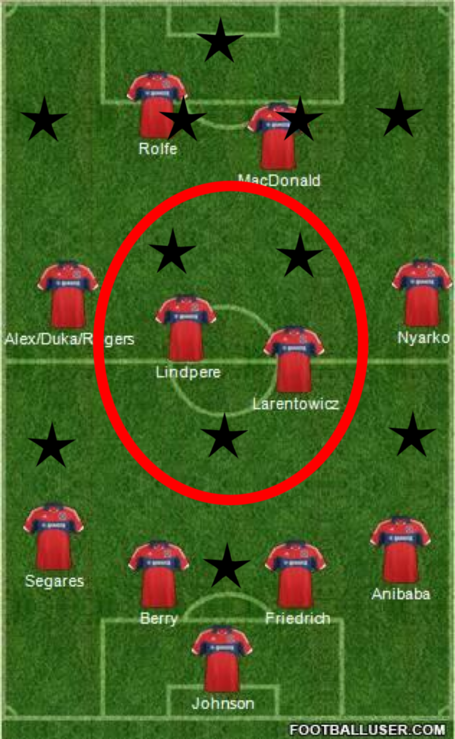 3 v 2 in the middle: The greatest tactical deficiency of the 4-4-2 vs. most formations deployed against it is the numerical advantage it surrenders in central midfield. As illustrated above, against a 4-3-3, 4-5-1, 3-5-2 or 4-2-3-1, the two central midfielders will be outnumbered in the center of the pitch 3-v-2. It's this fact, more than any other, that has the 4-4-2 dwindling in popularity.

The center of the pitch is obviously an important zone. When in possession, the 4-4-2 can struggle against a 3-man central midfield because the extra man makes it much simpler to pressure the ball; when defending, pressing can turn into a game of whack-a-mole, as the opposition's man advantage means they should always have a simple release pass available. There are times when, through superior movement and anticipation, a central duo can play through a 3-man group, but counting on it for 90 minutes game-in, game-out is hubris.

If the Fire play the 4-4-2 often in 2013, we supporters will need to get used to our opponents having more of the ball. Certainly there will be times when we meet another team playing 4-4-2, or when our opponents suck, or when our overall energy is good enough to balance things, but the expectation, when outnumbered in midfield, is that the opposition will win the possession battle.

Another trend that has undone the 4-4-2 - beyond the central-midfield numbers issue - is the modern game's emphasis on pressing. Watch a game, at any level, from 15 or 20 years ago and you'll see the difference immediately. Formerly, except in desperate situations, teams even at the top level of the game seldom applied serious defensive pressure beyond midfield.

The reasoning was simple: Football is a 90-minute game played by 11 men with only three potential substitutes. If one's attacking players press defenders, that's energy they won't have available to attack. Tactical variation is a pragmatic thing - omni-pressing didn't exist, for example, until the football world started producing athletes who could carry it off. Improvements in every branch of human-performance medicine have 'unlocked' this idea.

But look at the problems created when a 4-4-2 team tries to press hard against a setup with a 3-man central midfield. If only the strikers chase the ball, the pressing fails and one's goal-scorers are exhausted to no good end. But it really gets ugly when the wing midfielders join in - the defenders have less time to make decisions, but the extra man in midfield means they should always have a simple pass available. So, again, the pressing should routinely fail.

Sometimes great effort and conditioning can surmount these issues, as can incredible team spirit, each player's burning desire to write his name in the stars, an opponent's horrid passing or what-have-you. Counting on those things is more appropriate in Disney movies about soccer than in actual professional soccer, though. Perhaps Shao-Lin Soccer 2: Electric Boogaloo will feature teams playing a 4-4-2 and pressing right out to the boundaries in every direction.

Crosses to no one

The point about Rogers and his tendencies brings up one of the questions that hound our potential 4-4-2. Nowhere in the striking tandem of Rolfe and MacDonald do we find considerable aerial prowess. Does a potential addition of Rogers pile new responsibilities on the pair, responsibilities they are not ideally suited to meet?

On that point, the acquisition of Maicon Santos might offer some help. Santos is much more a target striker than MacDonald, by which I mean he's better at fighting for aerial balls against the tall, athletic defenders commonplace in MLS. If the 4-4-2 will be used as a change-up tactic, look for Santos to take some of those minutes. He and Rolfe don't have the kind of chemistry as MacDonald and CR17, but if the tactic includes getting the ball wide and cranking in crosses, Santos might be a better fit.

Part the Third: In which we go wack-a-freakin'-doo

In football, everything's always in flux; every change to the lineup or the tactic begets more changes, which prompt a response from opposition, which prompts more changes and continues the cycle. Later in this series, we'll take a look at the 4-3-3, the 'skinny diamond', the 4-2-4, the 3-5-2, and asymmetrical formations. Until then, let's nerd out in comments, yeah?