Goal Scoring From A Positional Perspective

A goal scored is a goal scored. Does it really matter where it comes from?

Share All sharing options for: Goal Scoring From A Positional Perspective

Last week, Tweed posted the first story of a series that looks at the Chicago Fire's potential goal production (or lack thereof) for the 2013 season. I had started to work on a project that is a little similar back at the end of last season. I had decided to shelve it a while back, but, thanks to Tweed, I figured that it might be worth revisiting.

The purpose of the project was to find if there was a correlation between where a team gets their goals from and a team's overall success. What prompted me to do this project were pundits. At the end of last season many pundits were saying that D.C. United needed a solid forward who could score goals as the final piece to their puzzle. Around that same time, pundits were criticizing Liverpool for relying too much on forward Luis Suarez for goals and that the Liverpool midfield needed to contribute more if Liverpool wanted to qualify for Europe in 2014. When these two arguments are put together, one can assume (or at least I did) that teams need to have a balance of goal scoring from both the forwards and midfielders to be successful.

I originally started off by looking at some statistics from a very broad view before getting down to a more granular level, so let's start with the broader view first.

Below is a chart of the all teams in Major League Soccer and their goal scoring ratio. I have the chart sorted by goal percentage in the forward section. The teams in the red made the playoffs. 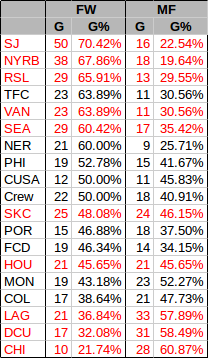 The first thing that immediately jumps out here is that Chicago had fewer goals scored by forwards than anyone else in the league. Part of this could be explained away by the fact that we played with a lone forward for most of the season. Still, we had Dominic Oduro, who missed quite a few opportunities, and Sherjill MacDonald has not exactly been Mr. Clinical either. With a lone forward, the Fire probably weren't going to be very balanced goal scoring wise, but it's still a little bit alarming to see that our forwards were dead last in the league in terms of goal scoring.

Using Houston as an example, I would consider any teams with percentages within +/- 5% as balanced. Going off that guideline - Houston, Chivas USA, Sporting Kansas City, the Columbus Crew, Portland Timbers, FC Dallas, and the Montreal Impact would be considered to be balanced. Out of all those teams, only Houston and Kansas City made the playoffs. All other playoff teams either relied heavily on their forwards or midfielders for goals, so it would seem that being balanced might not be a good thing.

Now, with all this talk about goals from midfielders and forwards, I did find something interesting when it comes to goals scored from defenders:

The Chicago Fire were not only 2nd when it comes to percentage of goals scored from defenders, but they were one of two teams with more than 10% of their goals coming from defenders to make the playoffs. In 2012, Chicago Fire forwards only netted 2 more goals than Fire defenders.

After gathering data on all the above information, I felt that I should look at things a little closer. To do this, I decided to focus on the top two goal scorers of every team and record how many goals they scored, the percentage of goals they scored for their team, their position and...well...I have a chart you can probably figure out below. The chart is sorted by the position each team finished in terms of the Supporters' Shield. As before, red font equals playoffs. 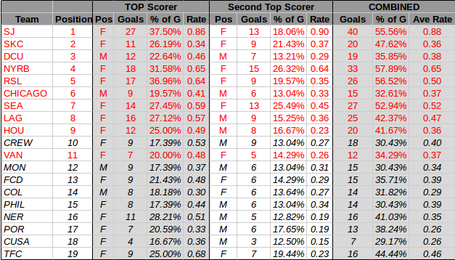 I think the chart above says a lot. There is a lot of data here, so I am going to put a few observations in bullet points below first:

I do think the data suggest that it is important to have a forward who can consistently score goals to make the playoffs, but I still think that balance is needed to be successful. All of the teams that relied on their goals coming from their forwards did not do so well in the playoffs. San Jose, Kansas City, New York and Real Salt Lake were all one and done in playoffs*. These teams tallied a whopping 5 goals in 8 games. Only Seattle advanced to the Conference Final where they dug themselves a nice hole in LA.

The Chicago Fire could be going into 2013 with the best forward duo that the team has had in a few years with Chris Rolfe and Sherjill MacDonald. Both of these guys are going to be entering 2013 with the benefit of having a full pre-season to train and to start off on the same page as their teammates. If Frank Klopas decides to deploy a 4-4-2, the bêchemal sauce of soccer formations, hopefully it will be with our two best striking options up top. If so, Tweed has projected that both Sherjill and Rolfe could reach double digit goal totals. This would bode well for the team.
However, as I pointed out above, double digit goal scorers alone will not help a team advance in the playoffs. Teams need balance or they become one dimensional. I have some of the same concerns as Tweed about goal scoring in that we might not have enough contributions from other players. I think a lot of this upcoming season is going to hinge on the performance of Joel Lindpere, as he seems like he will be the more offensive center midfielder on the roster. If Joel can replicate his 2010 season, it might be enough to keep pressure off of players like Sherjill and Rolfe, so the Fire can advance beyond the knock-out round and, possibly, reach the MLS Cup Final.

*I did not count the knockout round. If I did, then Vancouver would also be added to this list.