Who Do You Love (to Hate)? - Charting the Chicago Fire Rivals

Great rivalries make for great theatre so what are the Chicago Fire's 'best shows'?

Share All sharing options for: Who Do You Love (to Hate)? - Charting the Chicago Fire Rivals

You’ve probably seen the slogan. It may be a bumper sticker, it may be a t-shirt, it might even be a sign on the bar wall. It’s something along the lines of "My 2 favorite teams are the Bears and whoever is playing the Packers". It’s the other side of the coin for the rabid sports fan. It’s not enough to adore the team you love.

You also need that team to despise, that incarnation of all that is loathsome. Some of these rivalries transcend generations: Michigan-Ohio State, Red Sox-Yankees, Bruins-Canadiens. Soccer rivalries such as Boca Juniors-River Plate and Rangers-Celtic have awakened the passions unheard of in American sports. Surely, even the recent misfortunes of River Plate and Rangers have not squelched the animosity between supporters in the respective rivalries.

This weekend, MLS has scheduled a unique slate of matches. It is being dubbed Rivalry Week and is being given first class attention by NBC Sports. It’s modeled after NBC Sports Channel‘s successful Wednesday Night Rivalry hockey broadcasts. 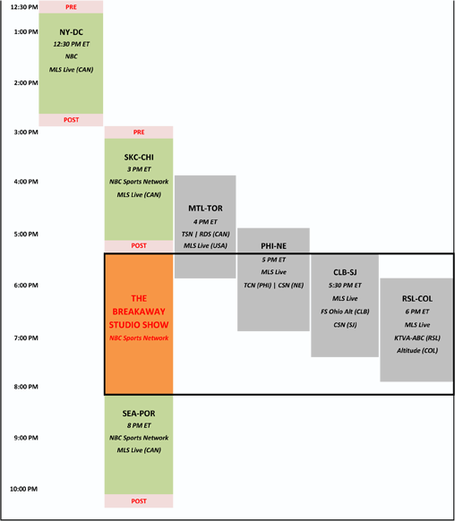 Additionally, NBCSN is debuting the very enticing sounding "MLS Whip Around Show" or The Breakaway, which is an NFL Redzone type broadcast where they will monitor several games at once and display the one that is of greatest interest at that moment. An emphasis on rivalry games was one of the rationales given by the league for moving to the unbalanced schedule. I will say that, given the size of the US and Canada, cultivating rivals in the young league is certainly a laudable goal. Some of these matchups are obvious. Seattle and Portland have been squaring off since the days of the original North American Soccer League. LA and Chivas USA face off in the only true MLS derby, although the disparity in quality between the teams has taken some luster off of the so-called Super Clasico.

The Fire’s designated "rival" this weekend is Sporting Kansas City (nee KC Wizards). So, it got me thinking, does the Fire have a team that the fans collectively despise more than any other?

I don’t think so because I doubt a survey of Fire fans would yield a consensus. Many rivalries are borne out of proximity such that there is an intermingling of supporters. Think of derbies such as Liverpool-Everton or Manchester City-Manchester United. There have been times in Fire history when certain teams were more in our crosshairs than others. But, the animosity ebbs and flows as team fortunes fluctuate. To be a true rival, it should be teams that we face on a regular basis, possibly punctuated by an incident or incidents that can never be forgotten or forgiven. The following table gives the all-time regular season records against all teams.

Any of these a RIVALRY? Here are my top candidates.

FC Dallas - Our rivals in the Brimstone Cup. For me, this is a bit personal. I was in Pizza Hut Park several years ago while on a family vacation. Dallas came back to draw the game and thus retain the Cup. The sight of the Dallas faithful marching and singing in the stadium automatically bumped this rivalry to the top of my list. I recall in the early days of the league, that there was a blogger named Tino Palace who randomly chose Dallas as his favorite team which meant he naturally inherited a hatred of the Chicago Fire who he would periodically pillory on-line. I remember scarves that read F*C* Dallas. It was all great fun.Then MLS moved Dallas to the western division and the number of matches dropped significantly and the heat between these two teams stared to cool down.

The history between the teams is fairly even in Chicago (9-8-2) but very lopsided in the Lone Star State (3-12-2). So, it was with great joy that the Fire finally won the Cup back last season. I was disappointed however that the trophy was intentionally dropped and damaged by supporters in the north end of the stadium. I don’t know if it’s since been repaired. Still, for me, Dallas is the team to beat. However, we are now in different conferences and it’s quite a trek to Frisco. Now that Texas has two teams, El Capitan has taken center stage for the Hoops. 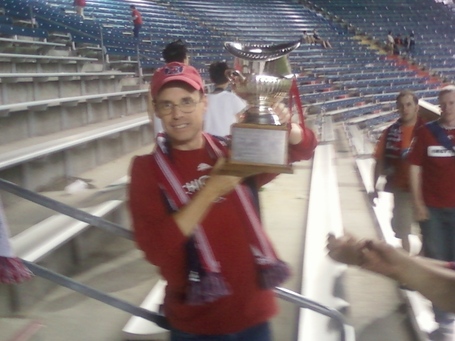 New England - The Revs are, by far, the team the Fire have squared off against most often come postseason. And the results couldn’t be closer. Take a look at the chart below. Each team has won 7 playoff games (with one draw) and has taken 4 playoff series each. These have been memorable, scrappy affairs.

Of course there was Chris Armas’ goal at a chilly Soldier Field. But, my toughest moment was Taylor Twellman’s scissor kick goal in 2007 that almost took Dasan Robinson’s face off. I’m convinced to this day that the ref should have called dangerous play. And that’s what makes a rivalry simmer, the old grudges that never die. But alas, the Kraft family has allowed the Revs to wither away in cavernous Gillette stadium. Further, there are much more logistically viable rivalries for New England among the teams on the eastern shore. Case in point, this weekend, the Revolution will be taking on Philadelphia.

Columbus - In some ways, the Crew would seem to be the perfect rival for the Fire. They are relatively close and there is always a big caravan of fans turning Crew Stadium into Firehouse East every summer. 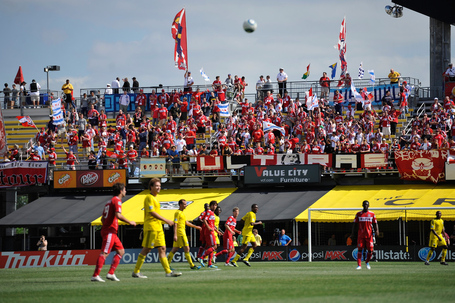 The Fire have had more regular season games against the Crew (47) than any other MLS team, winning nearly half (22) of those encounters. However, the two teams have only met once in the playoffs (a 2-1 Fire loss at Crew Stadium in 2008). That, and the fact that Columbus is one of the smallest cities in the league, may make it hard for us big city folks to take notice. However, the Big City/Small Town matchup works wonderfully for Chicago and Green Bay so perhaps there’s hope for this one yet.

Kansas City - NBCSN’s opening game for this weekend. This is a rivalry that’s getting some teeth, and is being stoked by the Sky Blues themselves. But, for me, two words help me get motivated against this team: Miklos Molnar. The high-scoring Fire dominated the Wizards in the 2000 MLS Cup Final but were undone by a single goal by the Dane. On a personal note, my only other road trip to see a Fire game was at a near-empty Arrowhead stadium. However, since then, KC has undergone an amazing transformation since being rebranded in 2011.

This left them with a silly, poser name, a badge that looks like it belongs on the hood of a luxury vehicle, and a stadium deal where the team SPENT money for naming rights for their stadium (money donated to the foundation of America’s current rogue-athlete-of-the-moment). I think they should rename the stadium Rumpelstiltskin Park because they are spinning straw into gold in that town. Add to it that the team is now enjoying a great run of form and enthusiastic, packed houses and I would designate this as the rivalry of most promise.