Staurday's Chicago Fire match in Kansas City was not pretty, but it got the job done.

In the wake of Saturday's game against Sporting Kansas City, a lot of people have been commenting that this match was reminiscence of the game that opened Sporting Park back in 2011 because that one also ended in a nil-nil deadlock. If you ask me, I think last summer's Fire victory at Sporting Park could fit in this argument as well. The only difference between the two matches is that the Fire scored a goal off a counter attack that caught Sporting Kansas City completely off guard. Heck, Since we haven't seen a Fire goal yet this season, let's watch a highlight of that one.

There was no way the Fire were going to go into Saturday's game and do anything but play defense and counter like they had in the two previously mentioned games. Frank Klopas tried the opposite once before on the second trip to Sporting Park in 2012. At the time, the Fire were the hottest team in the league, winning 7 of their last 8, and challenging Sporting Kansas City for first place. The squad had some swagger going and, instead of parking the bus, pushed the game and went after Kansas City. What resulted was a 2-0 thumping at the hands of Graham Zusi.

This time around, with the Fire's offense sputtering, Frank was going back to the defend and counter strategy and the fate of Saturday's game weighed on the performance of their defense.

For the Fire to even have a shot at getting a result, the questionable defensive line had to have as flawless of a game as possible. Their performance was not without flaws, but it was still pretty good considering what we have seen so far this season. Austin Berry's name was hardly called at all on Saturday, which is usually a good thing for a defender. Both he and Jalil Anibaba had very solid games. 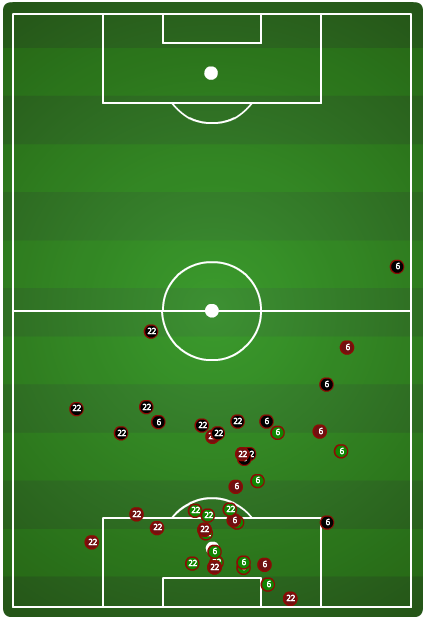 Between the two of them, They combined for 5 interceptions, 22 clearances and 9 recoveries.

Then there is Gonzalo Segares. People keep saying that he has not been the same since returning from Greece. I was wondering whether or not he was going to finally lose a step this season. He had a good game against New England, and he continued his impressive performance against Sporting Kansas City. 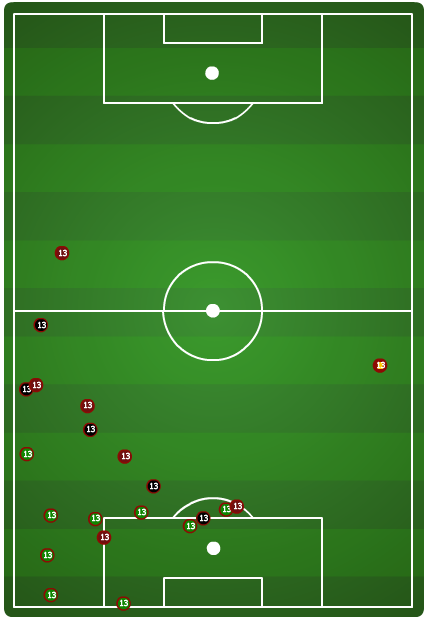 Sega won 4 tackles, had 4 interceptions, 5 clearances, 2 blocked crosses and a recovery. We will see how Sega performs as the season goes on, but so he's playing a pretty high level.

Since I've touched on Berry, Anibaba and Segares, I should probably mention the new face in the back line this weekend - Michael Videira. 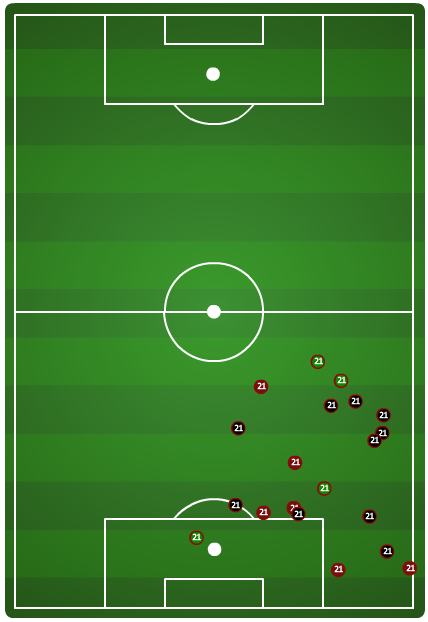 Videira most notably had 8 clearances and 8 recoveries. From watching the game, I did not really see any mistakes from Videira except that he let Seth Sinovic blow by him early in the second half, and Sinovic got a shot in on goal.

On the day, the Fire completed less than 65% of their passes from the midfield. 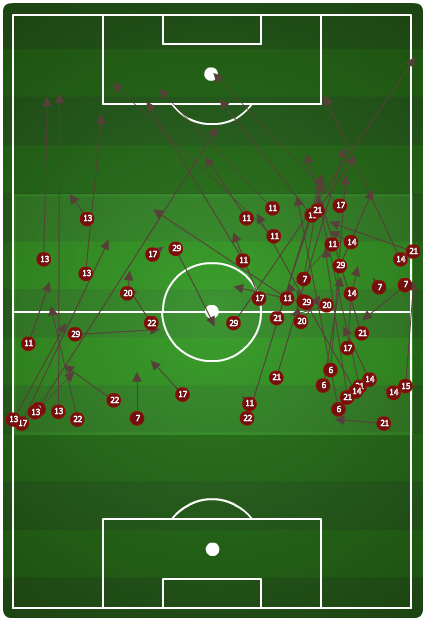 A handful of these missed passes were just simply due to players not being on the same page, but a lot of them were forward passes trying to spark a counter attack against Sporting. Most of the completed passes came in the first half as the Fire completed 66% of thier passes from the midfield. That completion percentage dipped to just over 50% in the second half.

Neither Sherjill MacDonald or Maicon Santos did anything worth while on Saturday. With the way the Fire were bossed around in the midfield, it was hard for either Santos or MacDonald to get involved.

Over 90 minutes, there were only 23 passes between the two of them and neither of them registered a shot. Sherjill did have one key pass in the second half the set up a Chris Rolfe shot.

One note on MacDonald: OPTA can't track player fatigue, but he looked gassed by the 60th minute. That's really concerning considering we are three games into the season.

While Saturday wasn't pretty, and the Fire haven't showed a whole lot of offensive prowess, the defensive performance was encouraging. If the Fire back line can repeat this performance in future matches, it would be one less thing to worry about.