A look at the Chicago Fire's 4-1 loss to Chivas from last Sunday through the OPTA Chalkboard.

Share All sharing options for: Post-Match Chalkboard: Second Half Demons

The trend for the Chicago Fire last season was to give up early goals and fight their way back to a draw or a win. So far in this season, the Fire have only give up one goal in the first half. That one first half goal came in the 38th minute of the season opener against the LA Galaxy. In the second half of games this season, the Fire have been outscored 8 goals to 1. Saturday's game against Chivas USA was no different.

First Half v. Second Half

With the Fire getting blown out like they did in the second half, I decided to focus on the two halves to see if anything really stood out that might have contributed to the team's collapse. Below is a table of some basic stats from the first half of play:

The Fire really seemed to be in control of this game during the first half. I was very disappointed to see the teams knotted up in a goal-less deadlock at half time. I really felt that the Fire should have been holding a lead by the half time break.

Here are the same stats for the second half:

Along with passing and possession, I also took a look at shots for the first two halves. Here is the first half:

Chicago definitely had the edge in the first half when it came to shooting. But things got more interesting in the second:

Both teams really stepped up their attack in the second half, especially Chicago. The Fire out shot Chivas 14 to 9 in the second half. Unfortunately, 11 of those shots we more out of desperation as they came with less than 20 minutes to play (5 of which came of the Jalil Anibaba own goal).

Here are the shots the Fire took in the second half: 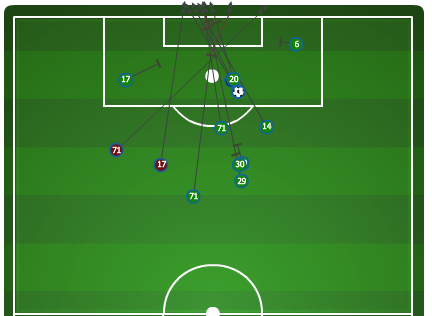 The majority of the shots are from outside the penalty box. Chivas, on the other hand, created most of their shots within the penalty area: 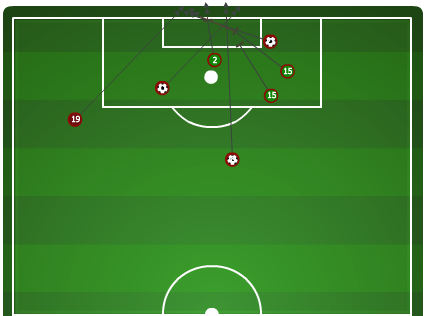 In the end, the Goats just created better chances in the second half and made the most of them. 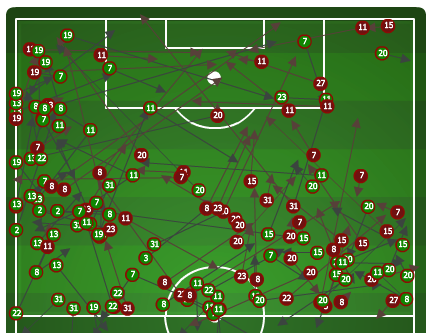 On the day, the Goats had 8 successful crosses, 1 key pass, and 2 assists from Wells Thompson's side of the field.

This post is not going to be all doom and gloom. The Chicago Fire did have a better game this week in the midfield. Through the game, the Fire completed 75% of their passes in the midfield which was higher than the 65% against Sporting Kansas City and the 73% against the New England Revolution.

The Fire also had a total of 6 key passes out of the midfield. While the Fire were desperately taking shots towards the end of the game, only two of those key passes came in the final 15 minutes. When it comes down to the midfield players specifically, every one of them had at least one key pass during Sunday's game.

Yazid Atouba was the only midfielder to not have a key pass, but he did not come on the field until the 86th minute to replace Alex.

Aside from a few stretches where Alex disappeared in the first half, he had a good game. He wasn't flawless, but he brings an attacking style to the central midfield that no one else can except for Chris Rolfe. 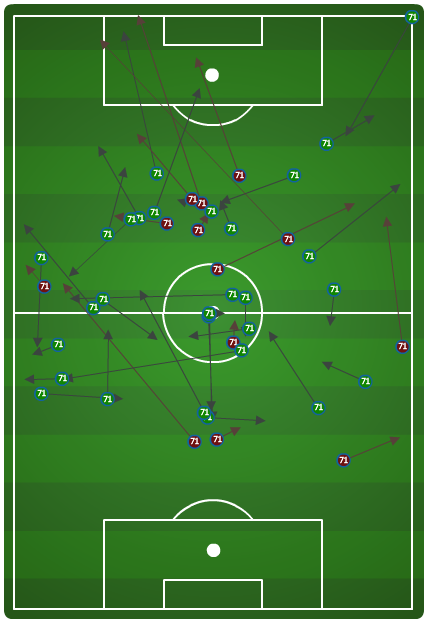 Alex had 3 key passes and completed 30 of his 43 passes. He also attempted 3 through balls. Unfortunately, only 1 of the through balls was completed.

Sherjill also had his best game thus far (although the bar has been set pretty low) against Chivas. 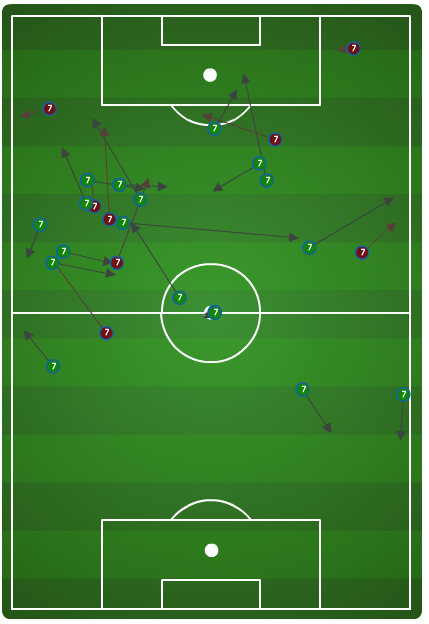 This was the most involved Sherjill has been out of any game this season. He completed 18 passes in this one. To give some context, MacDonald didn't even attempt 18 passes in the other 3 games. His hold up play was much better too, which allowed some of the midfield to join in on the attack. MacDonald recorded 3 key passes and the lone assist of the game for the Fire.