Baby, It's Cold Outside

Do Fire fans show up when conditions are bad?

Share All sharing options for: Baby, It's Cold Outside

Soccer fans across the fruited plain were riveted by last Friday’s World Cup qualifier in Commerce City. One of the main story lines regarded the harsh, wintry conditions in which the game was played. A glorious victory for the Yanks, but I think it also provides some evidence of why MLS is going to continue scheduling games when the weather is most agreeable in the northern hemisphere.

There are two topics that soccer purists regularly gripe about when discussing the structure of the league. One is that it should have promotion and relegation. The second is that it should follow the so-called international calendar. FIFA president Sepp Blatter has said as much but no one really takes him that seriously. Former Fire man and current Fox commentator Eric Wynalda is also convinced that playing during the winter would be a good move for MLS. The main arguments are related to movement of players and tend to dismiss the effect that climate will have on the fan experience and, just as important, fans being there at all. As part of their argument, they will assert that the NFL plays its games in adverse conditions so there’s no reason that MLS should not do the same.

Seriously? The NFL could probably play games at 2:00 AM and still draw a decent crowd. Such is the power of the world’s largest sports juggernaut. But, until the interest level league-wide reaches a point where ticket scarcity leads to stadiums selling out well before game day, the scheduling of games will impact the bottom line. In fact, the possibility of moving the 2022 World Cup to the winter months has prompted such international soccer luminaries as Karl-Heinz Rummenigge and Michel Platini to suggest that maybe, just maybe, soccer would be better served by playing games when the weather is nice. Certainly this would be better for the European national leagues. The downside is that the summer months have been used for international tournaments (European Championship, World Cup) and lucrative off-season tours by big name clubs. And, of course, the winter schedule is well-ensconced in the national psyches. What would the Brits do without their Boxing Day fixtures?

So, how does scheduling impact the Chicago Fire? I’m going to look at a couple of factors that have an effect on the crowd size: time of year and day of week. It is evident that weekend games are more attractive than mid-week games. MLS is making more of a commitment to avoid FIFA international dates. I applaud this decision because, when games are scheduled during protected FIFA dates, clubs lose key players to international call-ups.

This weekend, the team was without Sean Johnson and Joel Lindpere. There was an even more egregious example several years ago. The Fire were playing San Jose while both Landon Donovan and DaMarcus Beasley were away with the US team. I feel this cheats fans of the opportunity to see the players they most want to see. There are only two ways to play a full league schedule (plus mid-season friendlies) and avoid the international dates: schedule weekday games or extend the season duration.

Given the choice of playing with a full team on a weekday or trotting out weakened squads to fill a weekend commitment, I would opt for the former. The philosophy should be, "Regardless of when you come, you’re going to get the best we have to offer". The other option, lengthening the season, is viable to a point. Shrinking the off-season gives players less time to recover or to explore overseas "internships" such as that enjoyed recently by Austin Berry and Jalil Anibaba at Atletico Madrid. But, it also can lead to scenes like we saw in Colorado. You may be able to fill a stadium on such a day for a critical World Cup qualifier. But for an early season tilt between Chicago and Chivas USA? Well, that’s another matter. This year was the earliest start ever for MLS and, as we’ve seen, some games up north have been played in less-than-ideal situations.

Let’s look at some data from past seasons. First, let’s look at how attendance has progressed as the season proceeds. 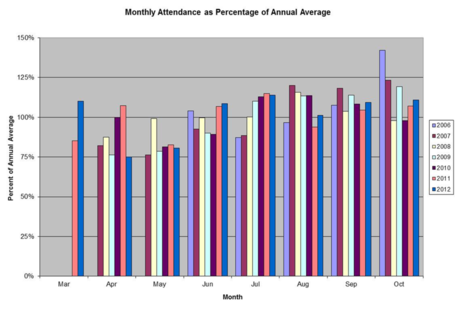 Attendance is weakest in the beginning of the season in the colder months of March through May and strongest in the hot month of August. Attendance tends to decline then for the next two months. At that point, team performance and potential playoff possibilities factor in as well. But this data seems to indicate that interest in the team warms up along with the soil.

Warm weather weekend dates comprise most of the games played. But what if a choice needs to be made? Which is better, a weekend game in a cold month or a weekday game in a warm month? The following table shows the attendance for the different combinations of days of the week and months of the year. A weekend is defined as a game played Friday - Sunday. Cold months are March to May and October. The table shows the attendance for each combination as the percent for that year’s overall attendance.

From this data, it looks like, as long as the team is doing well, that warm weather trumps weekends for getting people to the park. However, in the lean years of 2010 and 2011, there was less incentive for people to leave work early and travel down to Bridgeview for a night game, especially when it was cold outside.