The weekly OPTA Chalkboard takes a look at the latest Fire match against the L.A. Galaxy

Share All sharing options for: Post-Match Chalkboard: A Tough Beginning

The Chicago Fire roster has gone through a bit of a change this off season. Starting the season off against the defending champions on their home turf was going to be a tall order for a team that has so many new faces on the roster. A significant amount of the starters on Sunday played their first real competitive game together as teammates. Additionally, the Fire have not traveled well to the West Coast in recent seasons (2-5-3; 9 points in MLS matches over the last two years). Getting any points out of this one would have been quite a feat.

While the odds may have been stacked against the Fire, the type of shellacking they took was surprising. I don't think many of us expected to see the Men in Red get blown out so bad. It was something that has not been seen in a long time. The last time the Chicago Fire lost a Major League Soccer fixture by a score of 4-0 was back on July 12th, 2007 to the Houston Dynamo at Toyota Park.

Below are three things from Sunday's match against the LA Galaxy that stood out on the OPTA Chalkboard.

The midfield combination of Dilly Duka, Jeff Larentowicz, Joel Lindpere and Patrick Nyarko have been together for four weeks and it showed on Sunday. The midfield was not a cohesive unit working together in L.A. The most notable sign of this was in the passing patterns of Duka and Nyarko. Both players seemed to be isolated to specific areas of the field. 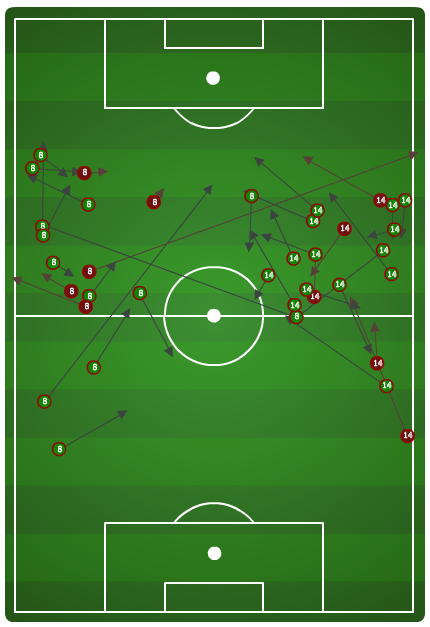 This is a pretty odd sight to see. Most wingers will at least cover more ground up and down the field with some over lap in the center. For comparison, here is the Galaxy's Colin Clark and Sean Franklin on Sunday. 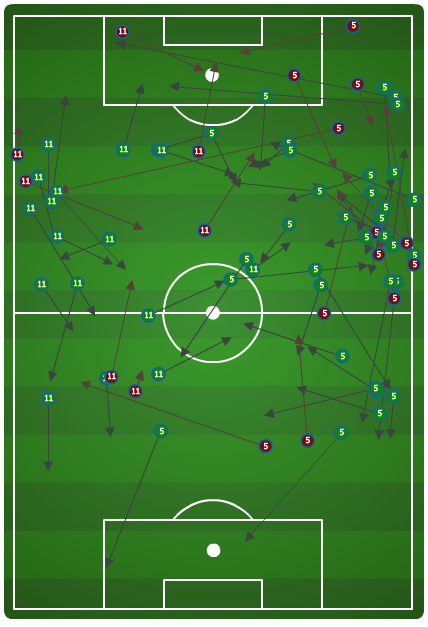 Duka and Nyarko's lack of touches outside of those two small areas make it seem like they were just standing around waiting to be passed to. Anyone who watched the game knows that this wasn't the case. They were moving around the field, but their lack of involvement is pretty stunning.

And then there was the uninspiring passing of Lindpere. He seemed to be a little bit adverse to playing the ball forward. Once past center field, Lindpere only attempted 4 (maybe 5) forward passes. 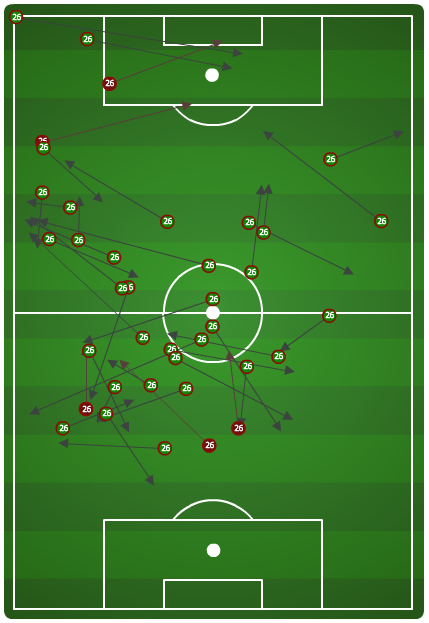 An impression that I had of Lindpere, prior to him joining the Fire, was that he was too conservative of a midfielder to be the central attacking midfielder and that maybe Hans Backe was on to something by not utilizing him in New York's central midfield. With that said, I had not watched that much of Lindpere in New York to really feel like I could make any sort of solid judgement on his playing style.

For the time being, I'm going to blame his hesitancy to be more aggressive on the fact that he is still learning his team mates and is not feeling entirely comfortable or confident enough to be more aggressive. I hope to see him take a few more chances in the next couple of games and try to make something happen.

With the midfield not getting the job done, both Chris Rolfe and Maicon Santos spent more time sucked into the midfield than they probably would have liked to be. 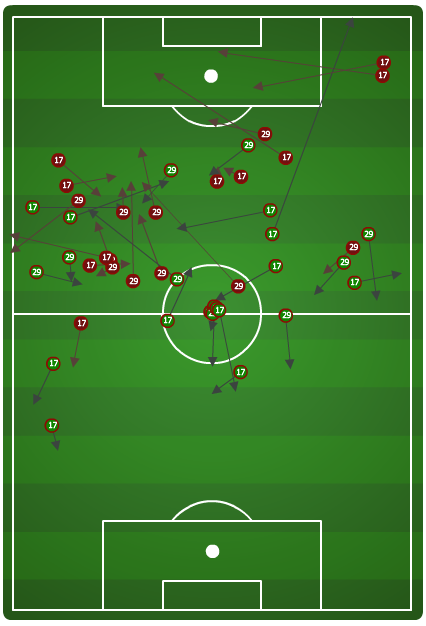 Mike Magee will get all the glory for his hat trick, but the player who probably had more of an impact on the game was Juninho. He was everywhere on the field on Sunday and made life difficult for the Fire midfielders. 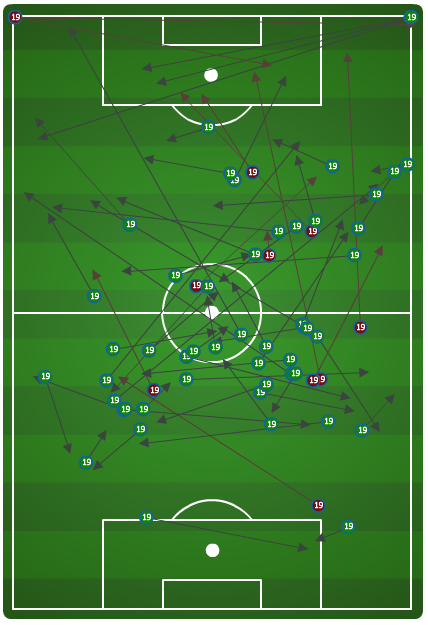 On the defensive end of things, he won more tackles (7) and had more recoveries (8) than anyone else on the team. Offensively he had more key passes (3) and more successful crosses (3) than anyone else on the team. Marcelo Sarvas did well on Sunday for LA and really linked up well with Robbie Keane and Mike Magee, but Juninho was the true engine that drove the midfield.

The only new players in the Galaxy line up were midfielder Colin Clark and goal keeper Carlos Cudicini. David Beckham is gone, and Landon Donovan is out on hiatus, but this is the same core of players that won the last two MLS Cups. A third of the Fire starting line up were on different teams when the Galaxy were hoisting their most recent trophy. Also, the last time Steve Kinney played in an MLS regular season match the Galaxy only had 2 stars above their badge. A team with so much turnover on the roster is going to need time to come together. With trips to Kansas City and Houston not far off, the start of this season could be pretty rough for the Men in Red.