Post-Match Chalkboard: Off The Schneid

A look back at the Chicago Fire's first win of the season against the New York Red Bulls from an Opta perspective.

Share All sharing options for: Post-Match Chalkboard: Off The Schneid

The Chicago Fire finally managed to get their first win of the season. These three points that the team earned on Sunday lifts them out of last place in the conference thanks to goals for now being the tie breaker in the standings. Matter of fact, the Fire managed to score just as many goals in Sunday's game as the two teams below them (New England and DC United) have scored all season combined. Maybe things aren't so bad?

There was a lot going on with Sunday's game. Daniel Paladini probably had his best game in a Fire jersey. Logan Pause made his season debut. Maicon Santos seems to be hitting one of his hot streaks that he is famous for. The Fire are not completely out of the weeds yet, but things are looking up.

It's pretty much unanimous. Daniel Paladini was the Man of the Match. A very impressive accomplishment considering that he was playing a position that he's not as accustomed to.

Up until his gritty, opportunistic header that leveled the game at one goal a piece, Paladini was not having that much of an impact on the game. He spent most of the opening 45 minutes isolated on the right side of the field and not getting involved. In the first 45 minutes, Paldini had only attempted 16 passes, completing a whopping 6 passes. 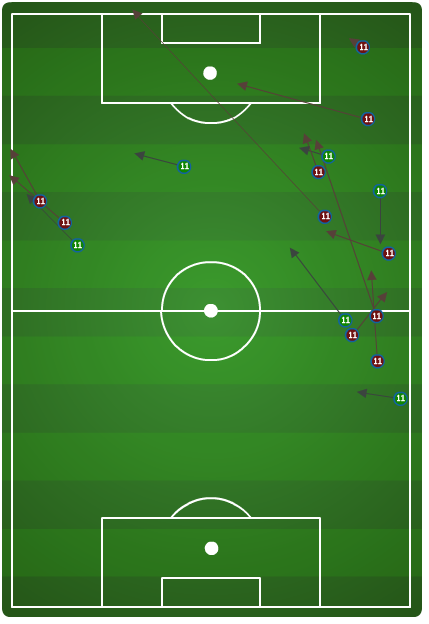 Above: Paladini's passing in the first half. 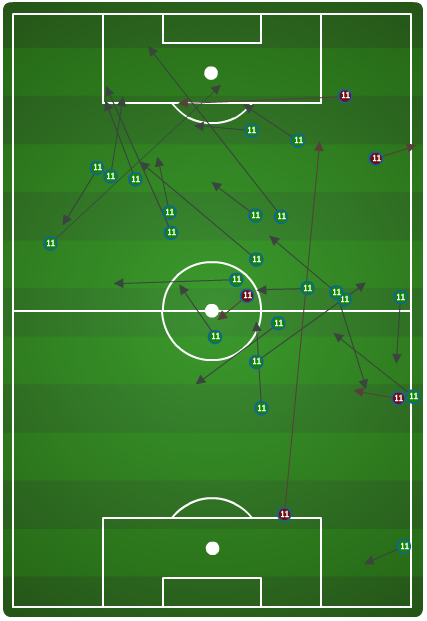 Above: Paladini's passing in the second half.

Things got even better for Paladini once New York swapped out Johnathan Steele for Thierry Henry in the 61st minute. With one less player in the midfield, Paladini completed 11 of his 14 passes, including another key pass and an assist on Maicon Santos' game winning goal.

The Return of Logan Pause

Last season in Klopas' two defensive midfield formation, Logan typically spent his time sitting deep in front of the back line as it was usually Pavel Pardo who would get further up field join in on the attack. This past Sunday, playing in a new formation, Logan spent most of his time right in the center of the pitch controlling the game. 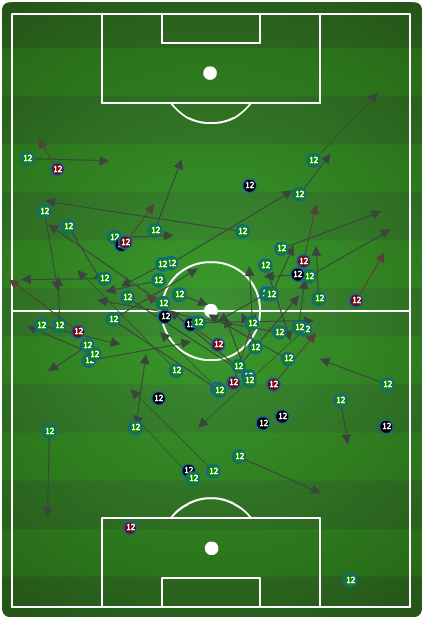 Above: Pause's passing for the game.

Pause completed 48 passes out of 56 with 2 key passes, 4 interceptions, and 12 recoveries. Pause also had a blocked cross and a blocked clearance on top of that as well. It's not an attention grabbing, dominating performance. This was a solid, workmanlike performance. Classic Logan Pause.

Speaking of workmanlike, please allow me to digress in to a bit of tangent here. For the players on the Chicago Fire, playing for the team is their job, so I have this tendency to relate certain things that are happening within the Fire organization to my current day job. It is always rough, especially for the newer employees (Jalil Anibaba and Austin Berry), to go an extended period of time at work while one of the senior employees is out. It is when that person is out of the office that the other employees truly realize how much they relied on that person. That person has been there since they started. That person trained them on almost everything they know. When the day comes that that person is out sick or on vacation, usual office business does not run as smoothly as it does when that person is clocked in and working.

If this is an awful comparison, I apologize.

Wells Thompson did not have a good outing against Chivas. Since Wells was making his second straight start at right back, I figured it would be interesting to see how he did this time around. What makes Wells' second start intriguing is that he was playing opposite of Hunter Jumper, who was making his first start in Major League Soccer.

Unlike Chivas two weeks ago, New York tended to play more through the middle of the field. The Red Bulls did, however, show a preference of going towards Wells more often than they did Jumper. 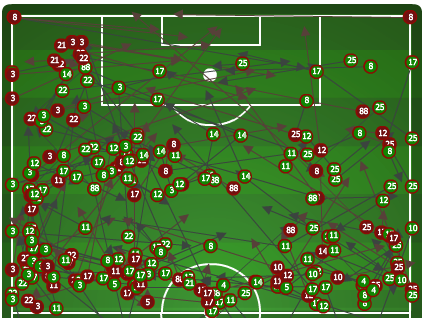 Above: New York's passing in the offensive half

The Red Bulls only went towards Hunter's side of the field 18.6% of the time and towards Wells' side 25% of the time. It was a little more balanced than Chivas who spent 38% of their possession on Wells' part of the lawn.

Here are the defensive numbers Wells put up against New York compared to his last outing at Chivas.

This past weeks numbers are a bit of an improvement as Wells performed better in most of the categories, but the more noticeable difference is in what New York was not able to do against Wells.

Is this Wells becoming a little more acclimated to the position? Or is this just New York looking like a good team until they get to the final third of the field? It's probably a little of both. Either way, this might not be the last time that Wells is slotted in at right back this season, so any positives are nice to see.