Words About Shapes: The Ripple Effect

The Fire front office reacts to the team's horrible start with two huge acquisitions; is it now or never for Klopas' coaching future?

Share All sharing options for: Words About Shapes: The Ripple Effect

Ah, Hope, hello - there you are again! Let's stay uncurdled this time, shall we? That last batch, the big shipment we received in preseason - the less said about that, the better. Stuff soured in the bottle.

I'm talking, of course, about this week's reinforcements: Bakary Soumare and, stunningly, Mike Magee. We will likely see Baky in tonight's 18, while Magee will not join the team until after the weekend. The holes in our roster were there for everyone to see - central defense, someone who can finish - and yet, somehow, we managed to fill those holes through intra-league deals.

It's important not to get ahead of ourselves. Nothing is simple. Nothing is automatic. But what is obvious is that the Fire's roster just got better - significantly better - by saying farewell to a second-round draft-pick, a tiny bit of funny money, and the rights to a guy who swore he'd slit his own throat rather than play in Chicago. If you're looking for the right time to feel good about our front office - or the right time just to say something nice - well, friends, here it is.

I'd love to name names right now. I'd love to laud Frank or Guillermo or Javier or whoever got these deals done. I cannot. Since our front office values a zero-transparency environment, I'm left with the unsatisfying task of thanking the Black Box. Someone did good! Thank you, Black Box!

Emboldened by this fresh draught of Hope, let's have a look at how these acquisitions might improve things on the field of play. Getting new players always involves a bit of shuffling - the existing roles may shift as the new guys claim places for themselves in practice. Done correctly, just lining up a couple of new starters can create a ripple effect of positivity throughout the team.

Take, for example, the addition of Soumare to our central-defender corps. Baky's a pure centerback, but his addition means that instead of Naïve DefenderTM Wells Thompson at right back, the Fire will start with Anibaba in that slot.

It is hard to imagine two players on the roster who contrast more than Thompson and Anibaba. Thompson's made a career as a scrapper who has enough speed to get around folks; as a fullback, his primary attributes were speed and determination. Unfortunately, his tragically underdeveloped sense of defensive space and position meant that he mostly used his speed to track back from 30 yards too far upfield, which led him, determinedly, to a sort of exalted rage-state: Constantly burned, constantly ashamed; a simmering stew of baleful intentions.

So Anibaba-at-right-back presents as a welcome balm to an XI that needs more calm and less fury. Jalil will not replace Thompson's ability to combine all down the right wing, nor will we see him constantly overlapping to rifle in crosses. What he does offer is a more stable platform from that space - Jalil's first thought is typically a safe one, which is exactly what a team leaking goals needs from its defenders. The majority of Anibaba's experience is as a centerback, which means he is accustomed to the constant evaluate-adjust-evaluate-adjust positioning cycle defenders must master. Also, Jalil seems to be able to avoid the kinds of emotional confrontations which have seen Wells sent off again and again this season.

The ripple extends across the pitch to Segares, who should now be given greater license to push forward. Given Anibaba's experience in the middle, don't be shocked to see the Fire's 4-man backline start to look more like a 3-man line with the ball - Jalil will stay at home, Gonzo will go gonzo, and the whole thing will shift two steps to the left to cover.

Greater security at the right-back slot means good things further up the pitch, too. Patrick Nyarko, returned to his right-wing slot from a dalliance at forward, will enjoy some of the freedom he was granted up top now that he won't be constantly covering for Thompson's wayward travels. And the double pivot of Pause and Larentowicz will surely appreciate not having to constantly tilt toward the right in anticipation of trouble there.

All of this said, nothing is guaranteed. If past performance were a guarantee of future outcomes, we wouldn't have seven points from 10 games with this roster. There is still plenty of work to do.

Now what in attack? Or, time for Frank to earn that money

So Soumare stabilizes our defensive setup, and that will make everyone's life easier. This team still is averaging a goal every two and one-half hours of play. Who's excited for some nil-nil draws, y'all? Me too!

As flummoxed and panic-stricken as we've looked without the ball, it's with the ball that we have really failed to produce the goods. Chris Rolfe is still identifiably Chris Rolfe - he still has a heavy, quick shot, he still looks to combine at the top of the box to get a little space for it. He just hasn't produced, and this Chicago attack was built around creating those moments for him.

Enter Magee, and start the clock on Frank's chance to save himself as a manager. Magee is a real Swiss-army-knife of a player, comfortable on either wing or up top, and as we saw in the season opener, he can finish. Will he slot in as a straight replacement for Rolfe? Or does Frank have other plans? At the end of the day, we would like to see the best players in the starting XI; how can we use Magee and Rolfe together?

People complain about Sherjill a lot, and it's not hard to see why. Showing up for preseason looking like he'd eaten two meals a day at the Cheesecake Factory was not a good start, and his ‘effort' (for want of a better word) in the opening couple of games was infuriating. That said, he is a conundrum that Frank needs to figure out, because, even with Magee in the lineup, we still have an offense built around late runners arriving in the box and finishing good service, and for that to work we need a forward who can play with his back to goal, hold the ball and find teammates. The only other option in that role is Quincy Amarikwa, who offers more industry but less quality. (Maicon Santos, besides being injured, doesn't have the self-effacement required to play a supporting role so tantalizingly close to the goal.)

Thing is, we need Rolfe to do what Rolfe does. He scored eight goals last year, one this year, and none of them were created by him for himself. He's gotten the chances recently and hasn't finished them. Magee isn't a pure like-for-like swap - they're similarly built, but Mike doesn't have the heavy shot from middle distance that Chris brings. What he does very well is adjust his game to his role - as a striker, he's crafty with back-post runs and impeccable close finishing. It's not hard to imagine Magee finishing some of the chances-on-a-platter which Nyarko and Mackie have provided for Rolfe this season.

Whatever happens, if we're to sniff the playoffs, Frank is going to have to get these guys on the same page. Six goals in ten games, with half scored in a single outing, is relegation fodder everywhere else in the world. We fans asked for more firepower; the front office has answered; now it's on Klopas to show he's got the goods. 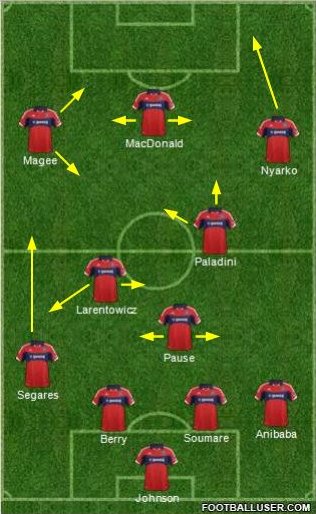 Were I magically transported to the manager's chair, I'd line the Fire up as the graphic suggests. I'm sitting Rolfe until he starts finishing, and Lindpere until he completes more passes to teammates than opponents.

Magee plays in the inside-left role he's filled often with the Galaxy - the same inside-left role I proposed for Rolfe months ago, combining with Segares for width down the left and ghosting in on the back stick when Nyarko dribbles through trouble on the right. Mackie is a pure ‘false-9,' almost a target-playmaker, looking for Magee and Nyarko slashing around him or Paladini arriving late.

Paladini plays a late-arriving linking role; think Dax McCarty with Red Bulls. Larentowicz and Pause function as a double pivot, with Pause as a pure anchor and organizer while Big Red covers more ground on the left side, sliding in to shield the defense when Segares gets forward, or stepping into space to launch his long-range bombs if Sega's home.

Feel free to fisk these suggestions as necessary - who the f--k am I, anyway? Just some guy with a laptop and opinions.

And hope. At last, again, a little hope.