The First "Fire Friday" is an Encouraging Success

In a competitive sports market in Chicago, it is essential that the Chicago Fire Soccer Club reaches out to the community and works to expand the fan base through a variety of means. Since Toyota Park and Bridgeview is so far from the city center it is even more important that the Fire have a presence in the city through events and activities

Share All sharing options for: The First "Fire Friday" is an Encouraging Success 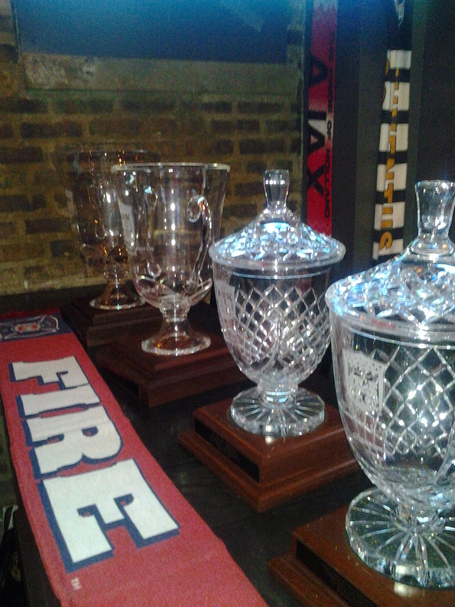 On Friday June 7th at 6 pm the Chicago Fire marketing team launched the first "Fire Friday" fan event at Cleo's on Chicago Ave to further expand the club's footprint in the city of Chicago. After the team announced the first "Fire Friday" on Wednesday, my expectations for the event were a bit reserved wondering how engaged fans would be on a Friday night right before match day.

I am very pleased to say that the Fire and their marketing team exceeded my expectations and put together a fun and casual event. I arrived early at about quarter after 6:00 in a Fire t-shirt. I was greeted at the door upon entering by Brendan Hannan, the Fire's Director of Marketing, Digital & Broadcast media. Brendan greeted all of the fans who arrived early to the event. I was invited to come up and look at the US Open Cup trophies they had brought along. Even more exciting to me was the Major League Soccer Supporters Shield that was on display for fan viewing. Hannan was a very gracious host and took a few minutes out of his time to talk to me about a variety of topics, including the teams goal to expand marketing in the city and even to shoot the breeze on the recent Fire acquisitions.

Hannan explained that front office staff looked at the event as an opportunity for them to engage with each other outside of the office and fans outside of Toyota Park with the goal of building a stronger fan culture. He noted that the club hopes that these events will expand and grow as the word gets out. Indeed, the beginning of the first event felt like a casual office party with a handful of fans and bar staff hanging out in their Fire kits. As more and more people began to arrive after work, the event quickly expanded into something much larger and Cleo's filled up with Firehouse red. The event seemed to extend far past the 6-8 time that was announced as people watched World Cup Qualifiers for Argentina and Columbia and then the USA/Jamaica game.

Fire fans mingled with bar regulars making Cleo's a full house. The event was a great opportunity for the Fire Faithful to connect further with Cleo's regulars who were not necessarily Fire fans. I have often argued that the influence of the fan community is as important as anything that the club does to expand soccer in Chicago. This event provided another platform for established fans to reach new ones. When I heard the announcement my initial thought was that the events would have the feel of a pep rally the night before match day. In reality the event was much more casual than that and fans were offered a lot of opportunity to mingle and chat with front office staff at a time other than game day. The event did bring a sense of connectedness that is usually only felt in stadium or at a watch party.

On a personal note I was excited to see the trophies and the Supporters Shield up close. The front office staff very generously let me have my picture taken holding the Supporters Shield (man is that heavy!). It is my opinion that the first "Fire Friday" was a great success. There is a lot of potential for growth with future events and the front office staff seem ready to capitalize on these events fully. Moving forward there is potential to provide improved access to players as well. Hannan had mentioned that it was possible that Gonzalo Segares might stop in for the event. Hopefully future "Fire Fridays" will see a lot of players dropping in. The Fire are poised to use the event format to reach out to city soccer fans and stress access to matches through the shuttle buses that are available at various locations. On the whole, "Fire Fridays" seems to be a savvy move by the Fire. If the front office continues to utilize a comprehensive marketing strategy to reach the fan base and improve access to the club, perhaps fans will start to see seats filling up at Toyota Park on match day!