Share All sharing options for: Words About Shapes: Affix The Mind Harness

Why do tactics matter at all? Isn't it all down to the players in the moment? Chance? A moment of skill? Confidence?

And why should Fire supporters waste time will all this maundering? It's been rumored that our manager doesn't have a great deal of patience for talking tactics, at least with people not on his roster. And we're playing a 4-4-2, the bêchamel of formations; is it possible we can just ignore all this, relax, and watch the pretty football?

Well, sure - we could. But what fun is that?

Tactics matter because no one can process everything that's happening on a soccer game in real time. There's too much - it's hard enough to perceive the movements of the ball and the players, let alone decide in real time which of those movements a player needs concern himself with. It's like drinking from a firehose - just too much to take in.

Tactical frameworks exist to clamp a nozzle on the end of that firehose, reducing the flow of decision-moments to a manageable trickle. Tactics are important because they allow players to think about the game in bite-sized pieces. The idea of the team shape tells players where to start out, who to stay connected to, and how we plan to control the space; the division of responsibilities with and without the ball further narrows each player's to-do list, hopefully in proportion to their abilities. Tactics are the story a team is telling itself about how it will win soccer games; the mental internal narrative of a squad is displayed on the field, either in patterns or incoherence.

We here in Fire-land have seen some freakin' incoherence this season. When the players either don't trust the story they're about to tell, or don't understand their part in it, the soccer suffers. The players look bewildered, because they are - the nozzle's fallen off the firehose. They're gathered around the spray, trying to snatch a drink before the flow peels their faces off.

Back to the future

Not all mental frameworks are created equal. Telling the gameday XI to line up at the top of the penalty box, all across the pitch, is certainly coherent. It's easy to understand. Everyone knows where to go - in the line at the top of the box, next to the other guys. Unfortunately, the story the team running this imaginary 10-0-0 is telling goes a little something like, "We are incompetent fools who listen to incompetent fools, and we lose."

If tactics matter, then choice of tactics also matters. It is important to put the players into positions where they can do whatever it is they do well, with the primary goal, of course, being winning the damned game. The dominant trends in football the last 15 years have hurried the game along, increasing both the physical and mental demands on the players - the modern pressing game demands incredible fitness, with the goal of ruthlessly diminishing time for thought on the field.

In other words, high pressure and comprehensive team tactics built around it have increased the need for tactical coherence in the opposition. High pressure is both an action by a player, and action by a team, poking and prodding around the edges of the opponent's team concept - a mental challenge: Whose ideas are stronger? Who can take the pressure?

Enter now the Fire post-Mike Magee. The Men in Red could have stuck with conventional wisdom - i.e., that a smaller, fox-in-the-box striker like Magee needed a larger partner - especially as they have an (increasingly) larger partner on the roster, ready-made, in Sherjill Macdonald. Behind him, journeyman Maicon Santos could also fill the big-man role. This roster was clearly built with a big/little partnership as a possibility.

It hasn't worked out that way. Since arriving, Magee has formed a prosperous and dangerous partnership, not with a target man, but instead with the similarly smallish Chris Rolfe. And somehow, it's working magnificently: In 11 competitive matches since Magee's arrival, the Fire have scored 27 goals - 2.45 per game.

Magee's impact on the club's fortunes is difficult to overstate. Not only did he show up ready to finish chances - he went something like six games in a row with a goal - but his emphasis on communication and mutual responsibility was crucial for a team whose ideas had come undone under the pressure of repeated failure. The team didn't change shape radically - the Fire played the same pragmatic, flexible 4-4-2 they'd shown since preseason - but the shape became coherent. 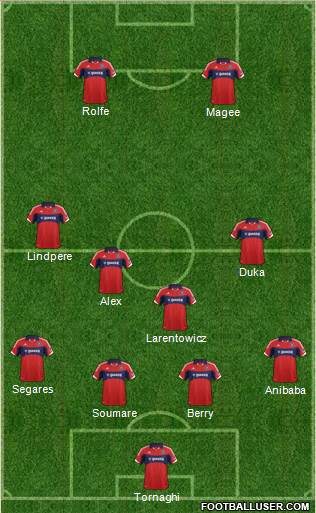 As I said above, the goal of every tactical variation is to put players in places where they can do what they do well. So, if Magee and Rolfe are the strikers on form, how could they be deployed to maximum effect? It is in pondering these questions that I've begun to appreciate some of the tactical decisions Klopas has made midseason.

I keep characterizing the Fire's 4-4-2 as ‘pragmatic' and ‘flexible.' The pragmatic part starts as a frank recognition of problems: Austin Berry and Bakary Soumare are just not good at playing a high line. They are both very aggressive, and isolating them by playing a high line is an invitation to disaster (see Vancouver 3, Chicago 1 for an example) with a soundtrack of Yakety Sax. Playing deeper, with some cover, they are much more formidable.

So, to keep from coughing up three-plus goals a game, we need to sit deeper. All well and good - so how are attacks going to be built? None of the Fire central midfielders, save possibly Alex, look a good fit for possession football - they all cover space well and win the ball efficiently, but their accuracy in short passing and movement in space is not top-notch. Another option would be to build the central midfield around a deeper-lying playmaker, a guy whose job it is to find the angles for service to the wings and the channels. But that guy isn't on the roster, either. Add in a right back who needs a lot of cover, and it's difficult to see how those small forwards are going to get the ball.

And here's where the ‘flexible' part is so valuable. One of the key characteristics of both Rolfe and Magee is that they are astute players - they use space well with and without the ball. They make great runs to open space. So the Fire allow their midfield to sag a bit towards the defense, not only to bolster what needs bolstering, but also to isolate the opponent's defense against this two-man Sudoku team.

By giving Rolfe and Magee acres of space to move in, Chicago forces opposing centerbacks to think constantly, always on a knife-edge. The ball moves to the right wing, and Rolfe makes a diagonal run from the left channel backwards into the space in front of the defensive line - does someone mark him? If they do, who? Simultaneously Magee is feinting a run in behind - who has him? Even a half-step of hesitation will leave one or both open.

The front two's emphasis on dynamic movement changes the nature of the problem an opponent's defense must master. No longer are they able to focus on a series of mano-a-mano challenges for the ball - instead of physical, where our midgets are vulnerable, the questions being asked of the defense are mental, which is right in Magee and Rolfe's wheelhouse.

Spacing is crucial, always, in soccer. In this case, Magee and Rolfe need space to affix the mind-harness, and for this they need help from the tactic. If Frank had us pressing like madmen, our midfield would step higher, which would force the opponent's midfield back toward the strikers. Midfield destroyers are where clever movement goes to die; by inviting pressure, the Fire are suckering opponents into drawing their backline up, isolating their centerbacks against the buzzing, flickering movement from our strikers.

We bet on Rolfe and Magee winning the mental battle, and at this point, that bet has been a winner. All things change. We have recently invested in another #9 in the person of Juan Luis Anangonó; surely he will see some playing time, and when he does, this dynamic will change. Until then, full credit to Klopas, Magee and Rolfe for finding a way to play with the hand we've been dealt.