Who Doesn't Love a Bobblehead?

The Chicago Fire and Quaker team up for yet another great promotion. Just nod yes on this one.

Share All sharing options for: Who Doesn't Love a Bobblehead?

First there was 'Press Release in a Canister'. Second, there was 'Berry Rookie Life'. The third installment in the Quaker and Chicago Fire series comes to a head right now. Ladies and gentlemen, I have received a bag. 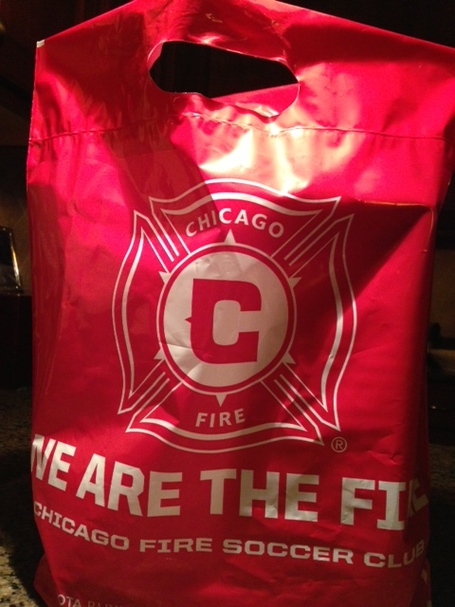 Chicago Fire fans and soccer and/or Chicago media members alike see this image as a sign of good things to come. It's a bag from the Chicago Fire Toyota Park Team Store.

Upon reaching into the bag, there's a box. 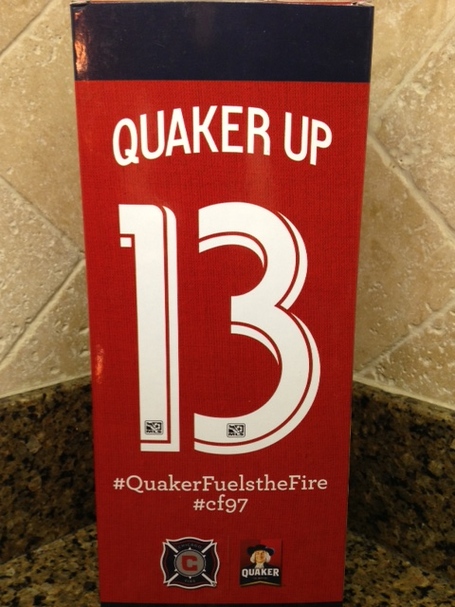 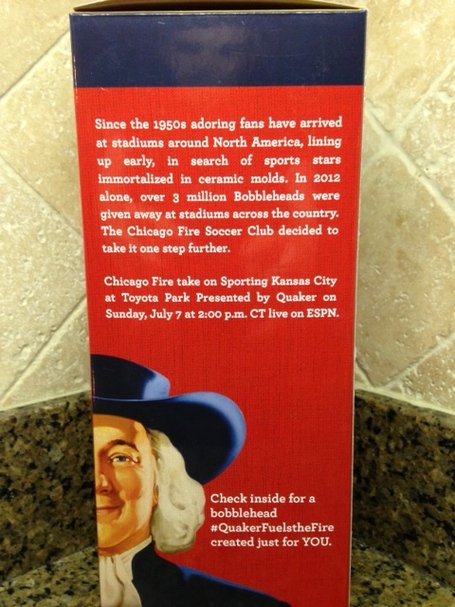 A bobblehead just for me? I'm not finished checking out all of the box and the other content of the bag. Count me intrigued though. 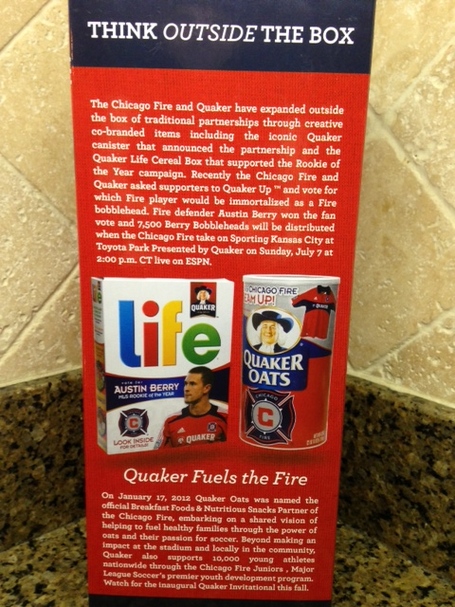 Here's a good reminder of Quaker and Chicago Fire partnerships outside of, or should I say on, the box. Better arrive early to Toyota Park this Sunday to grab your Austin Berry bobblehead. Watch out for details about the Quaker Invitational this fall. The buzz has begun.

Meanwhile #QuakerFuelstheFire, you are #fueling my wife's argument that I'm a pack rat. 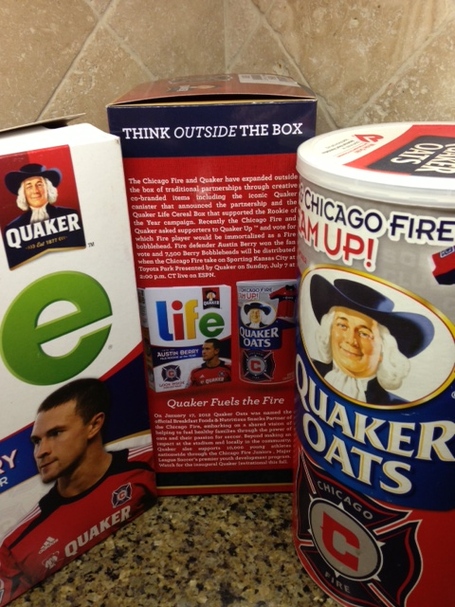 Thanks, thanks a bunch... even if I am guilty as charged. It didn't take me long to get out the previous promotional items.

Anything else in the bag? You betcha. 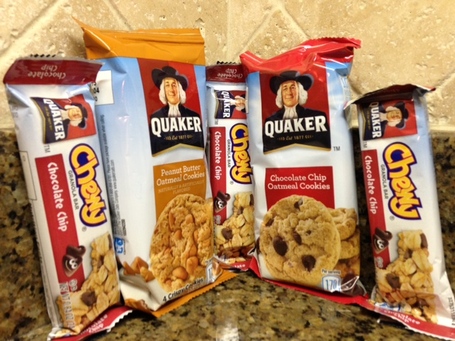 Four chocolate chip related items and one thing of peanut butter oatmeal cookies? Did they really read when I complained about the yogurt covered granola bars last year? Nothing personal Quaker. Those bars are just not my style. This is a nice 'spread' as usual made all the better by their absence.

Now to the vegetables of these things; the press release letter. 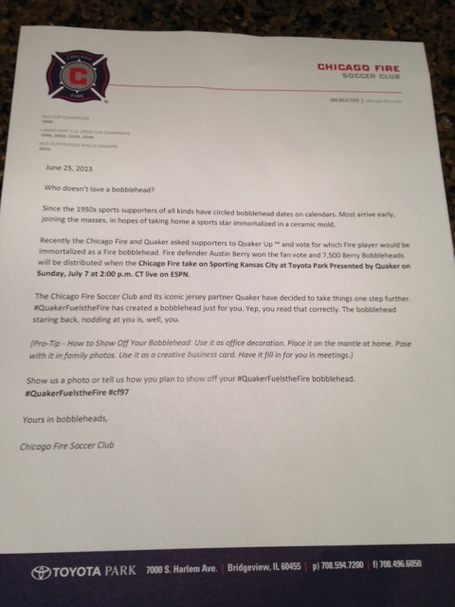 For those of you without magnifying glasses, here's what it says:

'Who doesn't love a bobblehead?

Since the 1950s sports supporters of all kinds have circled bobblehead dates on calendars. Most arrive early, joining the masses, in hopes of taking home a sports star immortalized in a ceramic mold.

Recently the Chicago Fire and Quaker asked suporrters to Quaker Up and vote for which Fire player would be immortalized as a Fire bobbledhead. Fire defender Austin Berry won the fan vote and 7,500 Berry Bobbleheads will be dsitrubted when the Chicago Fire take on Sporting Kansas City at Toyota Park Presented by Quaker on Sunday, July 7 at 2:00 p.m. CT live on ESPN.

The Chicago Fire Soccer Club and its iconic jersey partner Quaker have decided to take things one step further. #QuakerFuelstheFire has created a bobblehead just for you. Yep, you read that correctly. The bobblehead staring back, nodding at you is, well, you.

(Pro-Tip - How to Show Off Your Bobblehead: Use it as office decoration. Place it on the mantle at home. Pose with it in family photos. Use it as a creative business card. have it fill in for you in meetings.)

*Immediately go to open the box out of pure excitement* 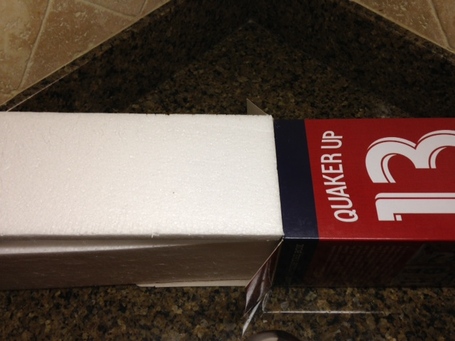 The building excitement surely has only been rivaled by that of Howard Carter and George Herbert upon cracking open King Tutankhamun's tomb... 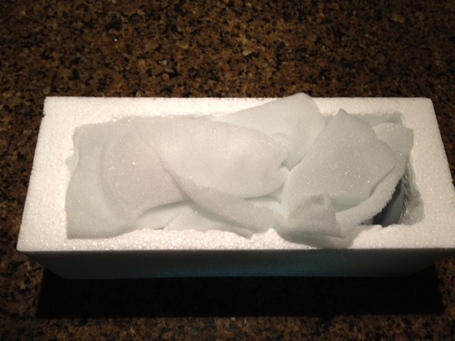 Frag-i-le? Must be Italian... Although for the record, I'm Irish and German. 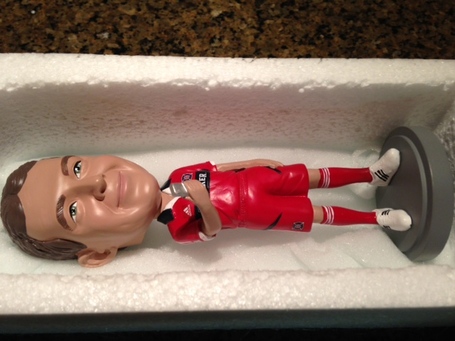 How did they do it?! 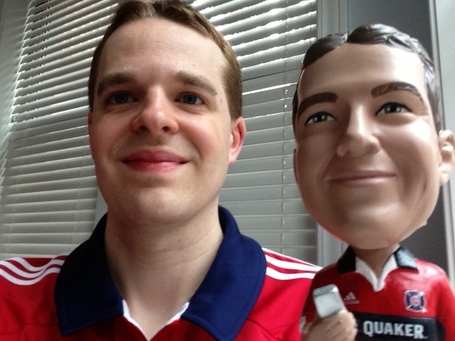 Not too shabby Chicago Fire and Quaker. Not too shabby at all. This bobblehead is just one of many that were sent out. As the #QuakerFuelstheFire hashtag and other tweets show, this is yet another very successful media campaign for Quaker and the Chicago Fire.

This. Is. Awesome. Say hello to Mini Me. @ChicagoFire #Bobblehead #QuakerFuelsTheFire #cf97 http://t.co/wyO2euRS7I

Many thanks @brendanhannan, @ChicagoFire & @Quaker for my bobblehead! Bring on San Jose! #QuakerFuelstheFire #cf97 pic.twitter.com/NfjR9kWuwm

The resemblance is uncanny. Which one is the bobble head? #QuakerFuelstheFire http://t.co/xqToqg9Fx0

Does it look like me? I think so. Thanks, #cf97 #QuakerFuelstheFire pic.twitter.com/HvVhLYjLpf

Albert posits that @dcunited will prevail Aug. 7 if these two take the field. #quakerfuelsthefire #cf97 pic.twitter.com/1FBSRsOJHg

The coolest soccer promo item I have ever recieved: A bobblehead of ME! #QuakerFuelstheFire #cf97 @brendanhannan pic.twitter.com/dzTqTBGFGp

I have always wanted my very own Bobblehead!!! Thanks @ChicagoFire & @Quaker! I think you nailed it! pic.twitter.com/cu63QrbhjU

My #cf97 bobblehead was hungry. I didn't know what else to feed him. @ChicagoFire pic.twitter.com/AYuwy3RREq

Love the creativity of the personalized bobblehead from @ChicagoFire, but it also scares me to have this on my desk. pic.twitter.com/k66FZbV6nU

Thanks to #cf97 for the bobble head dolls made in my and @MarkGiangreco7 images... Will show then at 10:25 on @ABC7Chicago

My career is complete. I am a bobble head.Almost as stiff as I am in real life. Thanks! @brendanhannan @ChicagoFire pic.twitter.com/eO76IYgN6z

In my opinion, this promotion is the best out of the three large promotions the Fire and Quaker have put together. Perhaps my mind has been greased by the team taking the time to create my likeness, but that's what makes it so exciting for the other people that received bobbleheads of themselves. Hats off for a great creative idea people are really responding too. This sort of thing provides an instant reaction of people wanting to get their bobblehead on social media. People with access to airwaves (TV, radio, or internet) have a great reason to share the Fire jersey and the Quaker name. The timing is perfect with Chicago taking on Kansas City on ESPN this Sunday at 2:00 PM. Congratulations to everyone involved on a very successful campaign.

These Fire and Quaker promotions have been a team concept through and through but one of the minds always at the center of the creative concepts has been Chicago Fire Director of Marketing, Digital & Broadcast Brendan Hannan. I would be remiss if I did not mention that this will be Hannan's last effort on the Fire/Quaker team as he has accepted an opportunity to work for the LA Galaxy. We should all be so lucky to go out in style at our gigs as Hannan leaves here. I'm sure the Fire and Quaker will come out with a top quality 4th edition of their promotions but Hannan will be greatly missed.