Words About Shapes: Rios a libero?

Share All sharing options for: Words About Shapes: Rios a libero?

It is clear, on both the evidence of 180 minutes of football and the opinion of every informed previous observer, that the Fire have acquired a phenomenal defensive footballer in Egidio "Cacha" Arévalo Rios. Most notably, Rios has a set of defensive skills we don't often see packaged together on this continent - he tackles firmly but cleanly, even in difficult situations; he notes the ball position but does not watch it move; he moves well in possession; his anticipation can be uncanny.

Rios' game is a superhero version of Logan Pause's - not a creator, a destroyer.

That said, the attempts by the front office to paint him as a potential box-to-box midfielder are off the mark. Nowhere in Rios' toolkit is the rampaging forward run ending in a 35-yard screamer, or sprinting forward to serve as a wall-pass foil for a forward. Box-to-box, just to clarify, is a good description of Daniel Paladini's game, for instance; at a higher level, think Steven Gerrard. Cacha's not like that - he stays back, sees things develop, and puts himself in positions to ruin the other team's ideas. Rios' game is a superhero version of Logan Pause's - not a creator, a destroyer.

The point is, asking our Uruguayan DP to contribute more offensively not only won't work, but it will absolutely make him less good at the things he already does at a superstar level. Rios, the other players, and the staff certainly seem to understand this. After playing in a pulley system alongside Jeff Larentowicz in his debut against New England - with mixed results - last week's shutout of Kansas City found Cacha playing behind Big Red, and playing phenomenally well.

So, in putting together a midfield, we've got a pure destroyer who's out of this world (Rios), a box-to-box guy who's playing pretty well (Larentowicz), another box-to-box guy whose playing time has fallen off (Alex) and a third box-to-box man who can't get a game (Paladini). We have an aging outside mid who always dreamed of being a #10, but who doesn't have the game for it (Lindpere). And then we've got out-and-out wingers in Nyarko and Duka. That's seven midfielders; we usually start four. How are we going to find minutes for all these players, much less bring along younger prospects like Victor Pineda?

It was in pondering the log-jam at midfield that I first considered the possibility of using Cacha as a libero in a 3-5-2 system - at first blush it seemed a brilliant idea, as it does solve several ongoing problems for the Fire. Further thought about the roster and the league has convinced me this idea is not great, as I will detail a bit later; for now, let's look at what using Rios as a libero could add to the team.

Firstly, our centerback pairing does very well when they're not asked to think about space. Both Austin Berry and Bakary Soumare are examples of ‘stopper backs' - they thrive on one-on-one challenges and win them frequently. They like to be aggressive and step forward to follow their marks. The difficulty is that last bit - when a centerback steps forward, ideally he's thought about the space he's leaving in behind, and our aggressive duo often does not. Baky and Austin are vulnerable to exactly the type of space-manipulating two-man game at which Rolfe and Magee excel.

Installed in a free role in the center of a three-man back line, Rios would become the brains of the group. When in possession, he'd have license to move forward into midfield to help keep the ball, but his main task would be marshalling, directing, and covering for two aggressive stoppers. Think of the work Arne Friedrich did off the ball last year, the work which turned Berry into the obvious Rookie of the Year - that work would fall to Rios, who is much better suited to it than Soumare.

Sliding Rios into the backline also clears, ever so slightly, the logjam in central midfield. Larentowicz would play his usual role, likely tipped slightly to the right (as we will see when we get to problems with this idea). Either Alex or Paladini slot in to his left. We've managed to get two strikers on the field as well as three central midfielders, and we still have width through Segares, Duka and Nyarko. 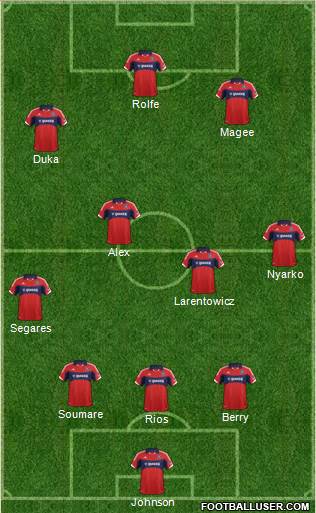 So we've solved a couple of problems. Our ball-watching centerbacks have cover, primarily. Unfortunately, we would create a whole host of other problems.

Since we're talking 3-5-2, the problems start on the wings. The three-man backline has gone out of fashion because unbalancing it is so bloody simple - push the ball down the wings, again and again. Quick thrusts down the wings creates matchup problems (centerbacks aren't as good at closing down wingers as fullbacks) and marking problems (the back line is shifting backwards toward the goal and sideways toward the ballside wing, all while trying to pick up runners), and it's so stinking simple that a beer-league team can do it.

So those outside wingers in the midfield have to either be three-lunged freaks or just give up attacking altogether. Nyarko works hard on both ends, always, but asking he and Segares to run the full length of the field, to be dynamically involved in both defense and attack, is simply crazy. Maybe for 15 minutes while chasing the game, but as a starting point for a team tactic this is a nonstarter.

Another problem is that of attitude. Rios' game is self-effacing, modest, team-oriented - if we asked him to play libero, he'd doubtless give it his best shot. But the great liberos have something in common - typically, they're defenders whose outsized swagger and astute offensive vision have demanded a bigger role going forward with the ball; Franz Beckenbauer is the gold standard, Sergio Busquets a contemporary example. While Rios doubtless deserves to be trusted with the freedom of the role, would his game expand to take in the new possibilities? Would he, having won possession, stride imperiously out of central defense with the ball, exploiting the space in front of him - or would he take two careful touches and release the ball to a midfielder? Rios, in this position, could prove to be more sweeper than libero.

The final difficulty presented by the 3-5-2 is league-based; put simply, not enough MLS teams play with two strikers for the formation to get much advantage. Chilean mastermind Marcelo Bielsa is a proponent of the ‘extra man' in the back, which is what the 3-5-2 offers against two-striker set. Against a single striker, though, a 3-5-2 is hamstrung from the kickoff, and against an aggressive 3-striker set, every turnover is hearts-in-throats time.

How these ideas can be useful

All that said, the ideas a 3-5-2 encourages are ones the Fire should attend to. Rios is very comfortable playing as a pure anchor man, staying put in front of the center backs and holding everything together. As he continues to learn his teammates, it can be assumed Cacha will learn to cover for their aggressiveness, as they should learn that aggressiveness will be both protected and rewarded.

In some ways, the 3-5-2 describes the shape the Fire are striving for when in possession - Berry and Soumare spread slightly to allow Rios to control the center; the fullbacks join in the attack, providing width or an out-ball, as necessary. Now, if only we were better at passing the ball ...