Words About Shapes: Where Dreams Come To Die

Share All sharing options for: Words About Shapes: Where Dreams Come To Die

There is a magical thing about bottoming out: In the aftermath, any outcome less than horrible feels like a tiny blessing. Every shaft of light is golden, every fresh-cooked meal delicious; mowing the lawn really well starts to feel like an accomplishment.

DC United comes into our house tomorrow evening, and they come there having mown one hell of a lawn last Saturday (a 3-1 mauling of Montreal). The changes to their roster, their lineup and their shape are working, their long stadium nightmare may finally be over, and all is right in their world.

You've been in love, right? You've felt that shift toward sunward? Everything is recontextualized, bathed now in a pearly light. A bird outside your window isn't irritating when it wakens you - it's singing you awake! Every mundane thing is actually bursting with purpose, you realize. You feel a bit sad for the old you, that person who was so recently blind.

It's like that for DC United right now. Suddenly it's the first breath of spring for DC United: Every bird is chirping for them; every movement is part of the dance eternal. It's the magic of bottoming out - now you've got context. Abandoning one's certain doom is so very freeing.

All of this is cause for concern as the Fire prepare for tomorrow night's US Open Cup semifinal. Sure, United is a team that Chicago ruthlessly crushed not 10 days ago. Sure, I will concede that the 4-1 scoreline that evening in no way flattered the Fire. But the changes DC has wrought have done more than bolster the lineup. The changes have bolstered their ideas about how to play. 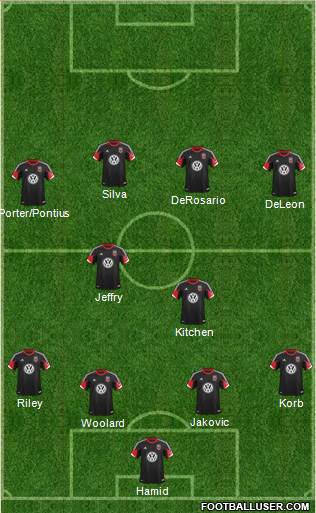 I have written in this space about how our pair of mobile, intelligent strikers cause mental anguish for defenders. Watching Rolfe and Magee pull centerbacks around for 90 minutes is fascinating, but it also gives us a teaser for what we might see tomorrow night. The shape DC adopted so successfully was very similar to the pragmatic 4-4-2 the Fire have utilized since Magee's arrival, having abandoned a single-striker set, like the Fire.

The similarities start at the back. Like us, DC has a pair of centerbacks who can be muddled when forced to deal with too many decisions too quickly. Like us, United seeks to ameliorate the problem by dropping the center of midfield a bit deeper and designating an anchor-man (for us, Jeff Larentowicz, for them Perry Kitchen) whose job is to keep the shape, cover for brain-farts, and turn with the ball once it's won. Like us, DC asks the other central midfielder to play looking backwards, winning balls as the second man then drifting into pockets of space for an outlet.

Where it gets tricky for us is up top. In Austin Berry and Bakary Soumare, we have two centerbacks blessed with athleticism, grit, and a good sense of how to win one-on-one challenges. What we don't have is a guy who peers around the corner and wins with anticipation. We don't have a guy who automatically calls the switches. The formation that DC used against Montreal almost certainly would cause us some problems.

It was listed as a 4-4-2, but this was a thoroughly modern, almost experimental shape - a 4-2-4-0 with no true strikers. The nominal strikers, Luis Silva and Dwayne DeRosario, are both attacking midfielders, comfortable trying to win the ball in the hurly-burly of the midfield. They would take it in turns to retreat back, doing so unpredictably; any of the four men on the third-band-of-four can dart into space behind. It's all to do with movement, which is all to do with anticipation. And it had Montreal chasing from the kickoff.

The shape coaxes the defensive line opposing it to come just a bit higher, just a step more now, all while peering at the defenders' eyes - is he still seeing me? Can I drift in behind? One step the wrong way, one moment where the defender is watching the ball and not everything, and DC has its opening.

It's almost a tactic based upon a sucker's bet: "You know we're terrible, right?" DC asks. "Come press us to the margins! Get all the goals!" It works on a couple of levels, both as a pure shape (contrary motion from the forward line creates space & movement in the defense, which the others exploit) and as a psychological construct (cunningly inviting aggression from overconfident foes).

The Fire will need a fantastic 90 minutes mentally to win this game and move on toward their fifth Open Cup trophy.

How to solve it

The Fire have what it takes to handle even the rejuvenated DC lineup, even absent any obvious formational advantages.

Sure, we could go back to a 4-2-3-1 and try to dominate possession, but Rolfe v. Kitchen, despite their similar statures, has a normal-dude-versus-contract-killer vibe to it; I'm doubting it would work. And, as curious as everyone is about Juan Luis Anangonó, throwing him up top and asking everyone to adjust around him - especially coming off an injury which has him out of training - is just insane.

What we do have is experience in this shape, a good amount of trust between the players - especially the players further forward - and a blueprint for how to dazzle and amaze their terrible centerback combo. They may have taken the main ideas from our shape and adopted them, but it's a recent adoption. We know this shape more intimately, and stay in it more readily.

As usual, the wings will be vital. We have a Gonzalo Segares and they do not - every single flank defender on DC can be exploited, both one-on-one and in space. Patrick Nyarko is what United hopes DeLeon will become, and either of Dilly Duka or Joel Lindpere is a clear upgrade on hard-working but occasionally hapless Kyle Porter.

What we cannot do is swagger onto the pitch, heads full of the 4-1 pounding, and think we're going to do a 2012 KC press-and-run job on our hapless foes. They're not hapless; we're not swaggering; this game will be a trench war. That's how we have to think of it. If we can find moments when Woolard is caught in space, more's the better, but imagining that DC hasn't found any answers is the kind of hubris one cannot afford in a knockout tournament.

The start of the game will be vital. If Chicago can demonstrate that it remembers and can exploit the same deficiencies as 10 days ago, suddenly the bloom is off the rose for DC. Suddenly that sunshine is just sunshine. Suddenly that bird isn't singing for you, it's shrieking at a cat that threatens its nest. And we're that cat.

Sometimes the only way to one's dreams is by stomping right through the center of someone else's. If all goes well, the Fire's muddy bootprints will still be all over DC's psyche come Thursday, and we will be into the US Open Cup final for the sixth time.