Speculation has Fire involved in trade for int'l slot; who will go? We await official word

UPDATE to the UPDATE:

7:15 am Central: Embedded Fire reporter Jeff Crandall is pouring water on the Larentowicz-is-traded speculation. Sounds like we will just have to wait for some confirmation.

No, Jeff Larentowicz hasn't been traded, nor has his number been changed. More on a certain Uruguayan midfielder this morning. #cf97

This report from Italy has it as a loan-to-buy deal, with Cacha here for the rest of 2013 and the club holding a purchase option going forward.

The Chicago Fire official Twitter account re-tweeted the below picture with "More to come ... #cf97" as the text. The original tweet referred in Spanish to Arevalo Rios, whose nickname is 'Cacha,' as 'a new player for the Chicago Fire." 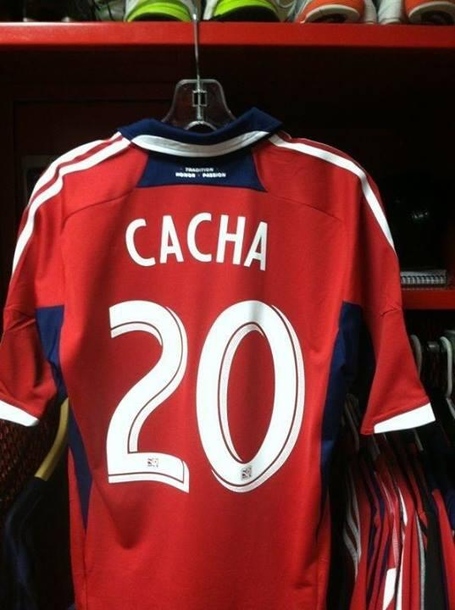 The photo appears to have been taken at the team's club shop at Toyota Park. So, we conclude from this that the Rios thing, despite all appearances to the contrary, is closed pending the physical - which multiple reports have said were his reason for flying into the USA.

Rumors are flying around Twitter; the fact that the number listed above is currently worn by Jeff Larentowicz, and the fact that he plays the same position as Rios, has led to speculation that Big Red is getting shipped for the international slot the Fire would need to sign the Uruguayan mainstay. If so, it casts the recent acquisition of Shaun Francis in a more critical light.

But all is speculation. What seems most certain out of this tangle is that #cf97, should this deal finally go through, has bought their best midfielder since Blanco hied off to play another 25 years in the Mexican minor leagues.

The transfer window closes today. I don't expect the Chicago Fire to make a move. Almost any move would require opening an international slot. The Fire's six international slots are full at the moment. Barring another move of some kind, there's no room at the inn. There are no rumors surrounding any domestic players.

Waiting to see if Fire adds Egidio Rios (Uruguay) on loan from Palermo. Last I heard, he had flight to US for physical but #cf97 wavering?

Steven Goff isn't too worried about the complexity, only Chicago's level of interest.

I agree with Guillermo Rivera's article that laid out a case that a Rios move is not in the cards. More importantly, I agree with his reasoning that this move isn't what the team needs.

Rios is a defensive midfielder and a team with Logan Pause, Jeff Larentowicz, a 2-0 U.S. Open Cup Semi-Final loss, and goal scoring issues doesn't need that.

On the other hand, why not start looking at players moves with an eye toward next year too? Arevalo Rios would add overall quality to the squad. We'll add anything else if anything happens on the transfer market for Chicago.