Words About Shapes: Hunter or Jeff?

Which approach should the Fire take in yet another must-win game Saturday - start the kid, or move the vet into the back line?

Share All sharing options for: Words About Shapes: Hunter or Jeff?

Bakary Soumare's awkward lunge across Jairo Arrieta in the 30th minute last Saturday set loose a cascade of ill tidings for the Fire. Not only did it doom the Men in Red to an always-sickening loss in Columbus - and a fall from playoff position - but Soumare's exile would extend a further game, meaning Hunter Jumper would presumptively be ticketed to start in the next game, the one two days hence, against Montreal.

Jumper is, by every account, a fantastic lad - funny, loose, committed - but to shut out l'Impact, one has to deal with the uncanny anticipation and dead-eyed calm of Marco di Vaio up top. Di Vaio is the type of striker who waits for the tiniest distraction, always pushing toward the goal, waiting for the moment when a defender turns the wrong way, or watches the ball, or doesn't step up with the rest of the line. He is one of the best in MLS at the cat-and-mouse mental game of attacking space, and he will not relent. Keeping him off the scoresheet is a 90 minute anticipation contest.

So, as the second half of last Saturday's game spooled out, part of me was watching it, and part of me was filled with terror: The prospect of yet another must-win game, this time against di Vaio and Montreal, with two second-year guys at centerback - yikes. Gradually, though, the part that wasn't filled with terror, the part still watching the game, noticed a familiar face stepping into the backline - Jeff Larentowicz - and playing the position like he had a clue.

I wasn't the only one who noticed, I guess. This week, word has filtered out from the Fire that Jumper and Larentowicz are both practicing at centerback alongside Austin Berry this week.

Question is, which should it be? Big Red or Jumper?

The case for Jumper 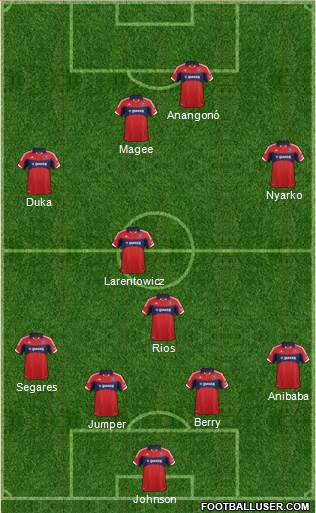 The center of the backline has a unique set of mental responsibilities - closing down attackers is simple enough, but deciding when to and how to can get overwhelmingly complicated. Do I step up and challenge for this ball? If I do, am I leaving space behind that's not covered? If my partner steps up to challenge, is there space I should cover? Should I cheat toward that space, or hold my line hoping offside will do the work?

Add in the fact that all these decisions happen with a blurring rapidity and it's a position that doesn't treat dabblers well. Even players who've played the position routinely in the past can lose the mental habits that breed success.* This is doubly true against Montreal. Their bread and butter is taking advantage of switch-offs in the defense with lightning-quick counters. No team in MLS turns simple ball-watching into goals-against more efficiently than l'Impact.

Larentowicz certainly is more experienced, but (save for 60 minutes last Saturday) he hasn't played centerback routinely since his early years in the league with New England. Jumper has practiced alongside Berry as the first backline sub for most of the season. It's simple to argue that Jumper would have a greater connection with Berry than Big Red.

Since the acquisition of Egidio Arévalo Rios, Larentowicz has been used further upfield, playing most of the time as a forward destroyer in the Fire's shape. That role has some give-and-take to it, but generally it's very aggressive in tone - see the ball, attack the ball. Playing alongside Berry, who is himself extremely aggressive, could be an issue if Larentowicz can't tone it down. Attacking every 50-50 ball is a great idea when one is playing well up in midfield - on the backline, against an attacker like di Vaio, it's an invitation to a breakaway. It is conceivable that Jumper's less aggressive style would be a better fit as a cover-back partner for Berry.

The case for Big Red 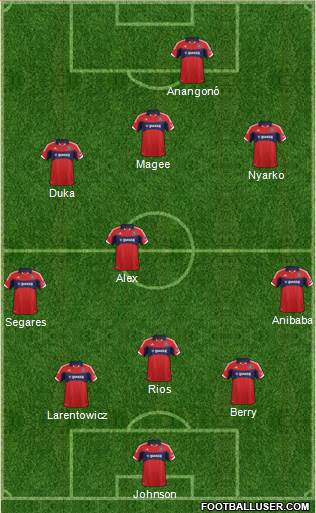 In Jumper's one start, the Fire shut out Kansas City, 1-0, with the lanky Texan snatching the only goal. One start at centerback, one team shutout, one goal - what's to debate?

Upon closer inspection, Jumper's performance in that game was merely acceptable. Yes, he got the goal, and full credit to his commitment, face-planting himself to get to the ball. But in space he was tentative, and in challenges his lack of strength could be exposed. With Gonzalo Segares in middling form, he could be exploited by a Montreal attack that is ruthless about these sort of matchup problems. His passing is also just fair, which could matter if the Fire come out of the locker room intent on pressing and keeping the ball.

Larentowicz at centerback immediately provides an answer to those concerns. Big Red's offensive game hasn't dazzled anyone, but he's superior to Jumper both with the ball at his feet and when connecting with teammates. If cf97 want to play possession - as they've shown in recent home games against Houston and New England - then the centerbacks will have to play wider to allow the wingbacks into the attack, and will have to handle the ball more securely, as moving the wingbacks very high can eliminate an easy out-ball for the backline. Larentowicz is accustomed to covering lateral space as part of a double pivot, and has made his bones as a midfielder; surely he would enable Chicago to keep the ball within this tactic more securely than Jumper.

Moving Big Red out of the midfield also gets more of the Fire's in-form players onto the field. For the last six weeks, Alex has been tremendous, both in the middle and on the wing; Dilly Duka has blossomed into an all-action two-way winger; and of course Patrick Nyarko is among the most under-rated all-around flank players in the league. If Larentowicz starts at centerback, each of those three could be in the starting XI.

Larentowicz-to-centerback also creates answers for the long-decried log-jam at midfield, as well as the equally-long-decried lack of depth in defense. The bench becomes explainable: Jumper becomes the first defensive sub; Logan Pause is the midfield sub if we're leading; Chris Rolfe or Juan Luis Anangonó and Quincy Amarikwa can provide offensive spark.

Let's face it: The Fire don't look to be storming into MLS Cup this year. Nothing about the recent up-and-down results indicates a team likely to win six games on the trot against the best teams in the league. Which means that, as painful as it may be, planning for 2014 should be on everyone's mind.

The addition of Arévalo Rios has altered the Fire's roster structure in unsustainable ways. Of the seven players listed as defenders on Chicago, only five have appeared on a gameday 18 in the last six weeks. Meanwhile, the midfield is insanely stacked: Rios, Larentowicz, Pause, Joel Lindpere, Alex, Duka, Nyarko and Daniel Paladini are all potential starters, and there's Homegrown Victor Pineda behind that group getting zero minutes. Signing Rios was, in some ways, completely insane.

What isn't insane is acquiring great talent whenever one is given the chance, and it's by that standard the Rios deal makes sense. The Uruguayan's play as an anchor at the base of the midfield has raised the Fire's ability to recover and retain the ball single-handedly. Going into next year, getting Rios signed to a multi-year deal has to be a top priority. Players like him don't wander into MLS routinely.

Rios' ascendance potentially leaves Larentowicz without a position. A permanent move to centerback for Red, then, could make sense. He's played there before; he's not getting any younger; and his offensive game hasn't been sufficient to make the sacrifice of it any cause for concern. Add to this the fact that Soumare is on an insane cap number and has started showing (again) his propensity to come off as a horse's ass and it's likely we're looking for a new starter in the offseason anyway. Move Jeff back, throw Soumare into the re-up draft, and you've freed up cap space while also subtracting a guy whose minuses are starting to outweigh his plusses. Everyone wins. (Except, I suppose, Soumare. But those who call Jeff Crandall a ‘muppet' can expect to pay the iron price.)

As always, interesting times. If you were Frank, what would you do?

* Witness the egg laid by Geoff Cameron, former MLS Best XI at centerback, when asked to move from his club position (right back) to centerback for the USA in the hex opener in Honduras. He'd lost his CB habits, and spent the match getting turned, blowing the offside trap and marking the space between attackers.