Words About Shapes: A Loss of Nerve

Fire rode an aggressive shape and their best possession of the season to a dominant first half against Houston, then seemed to lose confidence in the whole enterprise as the game went on

Share All sharing options for: Words About Shapes: A Loss of Nerve

I work in a restaurant. It's a busy restaurant. Funny thing about people: When they're hungry, they want their food NOW. And it'd better be right - look appealing, piping hot, flavors on point - or there goes the bill, there goes the food, there goes my tip. At that point, the restaurant has essentially wasted food to irritate people, and wasted lots of effort - the prep people who cut the produce, made the sauces and pre-cooked the pasta; the line cooks who delivered the ticket to the window; the servers and bussers who manage the dining room and work the guests - everyone's time, balled up and thrown on the floor.

So, there's pressure. It can be demanding. And the key component of someone who succeeds in that environment is this: Can you keep thinking? When the pressure comes down, do you put your head down and, though ‘working,' start to miss the little things? Do you substitute being busy for being effective?

This is the typical reaction, and it's a disaster - instead of anticipating, everything's reaction, and because reactions are always behind their prompting, you're chasing it, every moment. The moment you start looking for a place to hide, or for someone else to be a more-likely victim - the moment you start thinking like prey - you're done for. Successful people in this high-pressure, low-reward environment are those who can remain above the fray, mentally. They don't fall into the I'm-running-around-so-this-is-all-I-can-do trap. They don't think like prey.

Which brings us, through the magic of awkward segue, to Sunday's disheartening draw against Houston. The Fire absolutely dominated the first half, keeping the ball and slicing through the Dynamo defense to create several clear-cut chances - but only one of those chances found net. In the final 15 minutes, the pressure mounted, and Chicago put it head down and got busy - the Fire became the prey, scurrying and scrambling and desperate, and Houston took home a point. 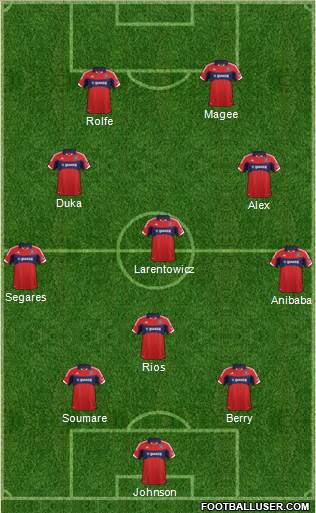 The story of the first half was the Fire's very aggressive 4-4-2 which morphed, in possession, into a sort of 3-3-4. The Dynamo seemed unprepared for Chicago to be this aggressive, and no wonder - la Maquina Roja has spent the last month playing in a counter-punching style, keeping two solid banks of four and looking to make something happen once the opposition over-commits. Sunday was something different.

As I surmised in an earlier piece, Egidio Arevalo Rios was at the center of the shift. The Uruguayan's ability to snuff out attacks gracefully allowed Chicago to morph into a full-blown possession team, spreading the centerbacks slightly, pushing the fullbacks very high into the midfield, while Rios sat centered, just ahead of the backline.

Rios' ability to cover space and ability to anticipate problems created a cascade of positive knock-on effects. Freed of responsibility for the area just in front of the defense, Jeff Larentowicz was able to play farther forward, as a sort of ‘forward destroyer.' His pressure and physicality kept the Houston central midfield of Adam Moffat and Warren Creavelle from turning with the ball, much less establishing an offensive rhythm. 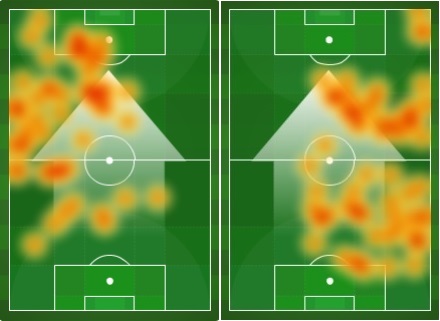 That wasn't the only positive change, though. The fullbacks' advanced position meant that there was less pressure on the outside midfielders - Alex and Dilly Duka - to provide width. Liberated from the chalkline, the pair playing in a sort of horizontal pulley system, taking turns to nip into the center of the park to keep possession or exploit space. (The fact that each started on his off-foot side - lefty Alex on the right, two-footed Duka on the left - indicates this was precisely the idea.)

The first half was as dominant a 45 minutes as the Fire have played this season. Aided by this shift in tactics and outlook, they were able to keep the ball and minimize turnovers. Again and again Chicago found Chris Rolfe and Mike Magee moving behind the defense, and only an astonishing performance by Tally Hall and some not-quite-there finishing kept the game in doubt going into the second half.

It was immediately apparent as the second half began that the Fire had changed their approach slightly. In place of the first half's Barça-lite possession, we had the reactive and conservative simple 4-4-2: flat back four, Rios less an anchor and more a traditional defensive midfielder, and Big Red staying back to keep the shape.

The cascade of positive action created by tactical decisions in the first half was gone. Alex and Duka now had to provide width to provide space for Rolfe and Magee; if either wide mid came infield, it gave Houston a free out-ball to the fullback on that side. Bereft of Larentowicz' physicality further up the pitch, Houston was able to settle the ball and control possession through Moffat.

Which is not to say the Dynamo immediately dominated - as the Men in Red demonstrated last week, they are capable of being a formidable obstacle when content to sit in two banks of four. This, then, clearly was the idea - since we didn't put the game away early, we'd sit back and soak up pressure in our solid defensive shape and hope to hit them on the counter.

It might've worked if Magee's shot in the 74th minute is two inches farther to the right, and hits the inside of the post instead of the face. A two-goal cushion would've seen Chicago coasting home with three points. Such a near thing; but it was not to be.

After that, the Fire turned to prey, which is how they gave up two points. For most of the second half, the Dynamo had plenty of the ball but could do precious little with it, manufacturing shots in tight spaces while heavily marked, if at all. In the last 15 minutes, though, they lost their shape entirely, substituting desperate, spastic ball-chasing for what has worked consistently. Somehow, they lost their nerve.

The midfield, forgetting about the control of space entirely, collapsed back into the defensive line, inviting waves and waves of pressure from Houston - crosses rifled in, combinations on the corners of the area: Suddenly everything was working against this flattened Chicago shape. When the Fire did win the ball, everyone save the strikers was in a straight line across the penalty area - there was no outlet, no chance to keep the ball and clear one's head. Instead, we settled for clearing the lines, like a game of pickup hoops played under ‘make it-take it' rules. Here, that didn't work, Houston - we'll hoof it to your centerbacks and try again.

So here was the failure: At the moment they needed solidity most, the Fire forgot that defending isn't always about individual effort and grit. It's also about remembering to control space, and communicating about controlling space; it's about thinking and moving, not just moving. By the end, Chicago had turned from a magnificent 8-man defensive block into a scurrying 8-man evocation of Brownian motion - particles moving randomly in space.

It is certainly true that several individuals (Nyarko and Anibaba leap to mind) could have done more to break up the back-heel combo play between Moffat and Corey Ashe that presaged the tying goal. If Anibaba steps up to challenge instead of standing 5 yards away, does Moffat have enough view of goal to crank the shot? If Nyarko follows the play infield, does his presence make the backheel-exchange more difficult? It seems likely. But the damage was done not in that moment, but in the 15 minutes that preceded.

Had the Fire kept their heads, not lost their sense of group shape and started chasing the ball, the ability of Houston to apply unceasing pressure might've been lessened. The team wouldn't have staggered into stoppage time completely panicked and desperate. And Chicago would be in the playoff spots, tied with New England in fifth with a game in hand.

The two points were lost to a failure of team mentality. When one thinks like prey, one tends to get preyed upon.