Let us say this for the 2013 edition of Our Chicago Fire: They will keep it real.  How real? 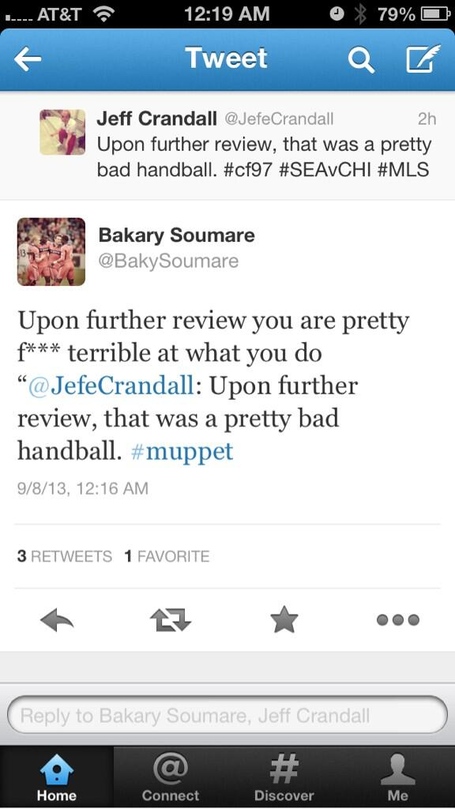 That's right - they keep it starting-centerback-tweeting-profanity-postgame-at-beat-writer real. They keep it owners-box-shouting-profanity-at-unhappy-fans real (allegedly). And, on the field, they kept it playing-well-enough-to-win-but-for-three-massive-meltdowns real, falling to a shorthanded Sounders squad, 2-1, at Century Link Field Saturday evening.

It all started so promisingly. Surprising absolutely everyone, the Fire - in the absence of inspirational, shape-minded defensive midfielder Egidio Arévalo Rios - had swapped in inspirational, shape-minded defensive midfielder Logan Pause, kept their tactics nearly intact from the home match against Houston, and put together a performance worthy of a result. This was not the two-banks-of-four Chicago team everyone expected; in their place was a proactive group that tried to pounce on Seattle in roving packs.

The proactivity bore fruit in 26th minute. A skirmish for a 50-50 ball near the Fire's right sideline resulted in a spinning ball wandering out to the left, where Dilly Duka moved smartly infield to claim it. The Sounders defense stepped up quickly, seeming surprised at Duka's winning the second ball. Djimi Traore trailed the play a bit, and the two yards he lagged was enough to play Mike Magee onside.

Duka's simple through ball found Magee all alone behind the rave-green defense, and the MLS scoring leader made no mistake with a simple finish to the bottom corner. 1-0 Fire, on the road, on fake grass, in Seattle. F'real.

Then came the incident which led Bakary Soumare into the magical land of "When Keepin' It Real Goes Wrong." About three minutes after the Chicago goal, the Sounders had a corner kick. It's possible Soumare has spent too long getting his NFL fantasy team together in the week just ended, because when Mauro Rosales' corner came knifing in, Soumare didn't just mark Jhon Kennedy Hurtado - he covered him, like a cornerback covers a wideout running a simple out-route. Bakary's use of his hand - extended from the moment the ball is struck, bizarrely - would have been textbook in gridiron football, but in association rules it was a blatant, intentional hand-ball in the box.

Sean Johnson bailed out Soumare on this occasion, reading Osvaldo Alonso's intent and spearing the resulting penalty-kick wide of his post, preserving, for the moment, the Fire's one-goal advantage. Chicago's netminder was fantastic for most of the night, finishing with four saves.

Johnson's one mistake on the evening cost the team dearly. With the Men in Red still leading 1-0 in the 40th minute, 'the Milkman' charged out of his net after a Rosales back-post cross, which kept tailing ... and carrying ... and tailing away from the third-year pro. Running into traffic, Johnson couldn't get both hands on the ball, having to flail desperately at it at the final moment, getting a single hand on the ball and deflecting it further along toward the far corner. Winger/defender Marc Burch was the first to the bouncing ball, and he alertly centered to Lamar Neagle to tap home before Johnson could scramble back into the goal-mouth.

The second half was played more carefully than the first - neither team seemed perturbed by the thought of a draw. Again, the surprise was the refusal by the Fire to play on the counter, despite playing on the hated turf. Chicago showed in this game that possession football is not entirely foreign to them. Another curious thing about playing further up the field - every turnover isn't a disaster.

The decider was the kind of goal that will haunt this team. Seattle substitute Zach Scott - brought on at left back to preserve the draw - stayed unmarked on a run that took him into the penalty area, where he connected with an Andy Rose through-ball to rifle a low, sharp centering pass to no one in particular.

The Sounders' David Estrada dove but could not meet the pass. Instead it wandered on to Soumare, whose ghost of a touch steered it onto the shin of Gonzalo Segares, who was retreating to cover the back post. Gonzo couldn't get his feet sorted out before the ball had struck him and, in the mother of all bad touches, skipped seven yards past Johnson and into the Fire net.

The Fire (10-11-5) must regroup quickly, as they play twice in the week upcoming: Wednesday evening in Toronto, Saturday at home against New England. Unless Sunday's results go entirely Chicago's way, the Men in Red will be five points out of the final playoff spot with only eight games left to play.

Seattle (14-8-4) has a chance to take control of the Supporters' Shield race in Friday evening's nationally-televised showdown against Real Salt Lake.